Tidbits about the upcoming class Sets and skill-boosting Legendaries 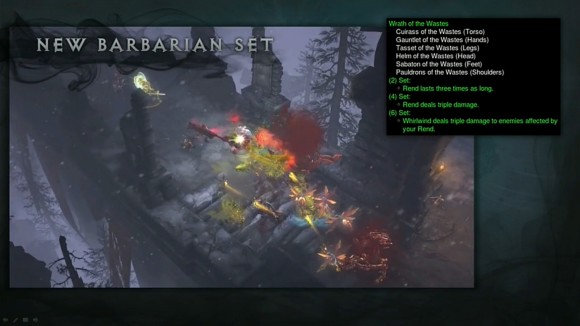 Diablo III Patch 2.1.2 has been out for nearly a month, and the development team is hard at work on the future content Patch 2.2! That patch will bring new class sets, and the Blizzard Blue posts this week discussed options for how they will arrive. Here's a look at the interesting Diablo III blue posts over the last week.

Patch 2.2 Sets
As detailed in a BlizzCon 2014 panel, patch 2.2.0 will add new 6-piece class sets, while overhauling other older sets. Those new class sets may be Seasonal items, first available only to Seasonal characters after patch 2.2 goes live. This is one of the decisions that the developers have to make as they add new content to the game, balancing additions to the entire game with incentives to play in Seasons.
Post by Blizzard (Blue Tracker, Official Forum)
The set items that were shown at BlizzCon are currently planned for patch 2.2 and as such will not be available in Season 2. Whether or not those sets will be Season-only has yet to be determined though.

Boosting Skills With New Legendaries
Although a lot of attention has been paid to the class Set items, individual Legendary pieces are also being added every patch. Patch 2.1.2 brought an overhaul to the Demon Hunter Marauder set, but that set doesn't boost some skills such as Rapid Fire or Strafe. The developers are looking to design specific Legendary items that provide interesting gameplay for those sort of skills. They look at data on the Popular Builds & Skills, when deciding which skills could use some new items.
Post by Blizzard (Blue Tracker, Official Forum)
Rather than adding spenders like Rapid Fire or Strafe to an existing set, we'd like to take the opportunity to introduce new items that complement those skills. We want to give you more options outside of the Embodiment of the Marauder set.

While we don't have plans to share regarding those particular skills at this time, we do look at data for skills that are less used and feedback on which skills players would like to use more frequently. That information often impacts the design of future items.

Crafting Management UI
About a year ago there was an early discussion of ideas around adding a new user interface for crafting materials in Diablo III. While there have been a few changes since then to help with managing crafting resources, that UI approach is not part of the current plans.
Post by Blizzard (Blue Tracker, Official Forum)
Posted by: Yetman01/17/2015 12:19 PM

This was (original thread has been deleted) a post made by Grimiku...

"This is one of many solid suggestions we’ve seen regarding improvements that could be made to the crafting resource management system. On the whole, we agree with your feedback and are currently working on some different ways to help streamline the process of picking up, storing, and using crafting resources.

Let me preface what I’m about to say with the caveat that any changes we make to crafting material management at this point would come after Reaper of Souls ships. With that in mind, here’s a few ideas we’re tinkering with to help get you thinking about some of the cool possibilities:

Note that this is all still a work in progress and thus subject to lots and lots of iteration. Again, while this is something that won’t make the launch of the expansion, we still wanted to acknowledge that we’ve seen your feedback, agree with it, and are already starting to act on some of your suggestions."

There was a time when we had been thinking of a UI-based crafting material management system but we have since moved away from this idea. That said, we have looked at different options to make collecting certain kinds of loot a bit easier and less cumbersome. One of these ideas was recently implemented in a hotfix, making stackable treasure drop in fewer, but larger piles. However, we don’t have any details to share about other possible changes right now.

Seasonal Transmogrifications Will Return
Two transmogrification designs were rewarded in Season 1, to any Diablo III player who leveled a Seasonal character up to level 70. The outfit will be rounded out during Season 2 and Season 3. For players who missed the designs the first time around, they will be available in a future Season.
Post by Blizzard (Blue Tracker, Official Forum)
Posted by: Fallen02/06/2015 10:22 AM

We'll likely do the same for other pieces of the set, which are currently scheduled for Season 2 and Season 3. Hope that answers your question, Fallen!

Season 2 Conquests Preview
Conquests are the Season-only achievements in Diablo III. The battle.net ranking of heroes has been updated to list all the Conquests that will be available for Season 2. Players can race to earn such Conquests, once Season 2 starts this Friday!
Post by Blizzard (Blue Tracker, Official Forum)
Season 2 begins February 13* and we're as excited as you are to jump in and start tackling new challenges with fresh characters!

Some of you may be planning to compete for particular Conquests. To prepare for the start of the new season, all new Season 2 Conquests (and their associated leaderboards) are now available for viewing in-game and on our website. While you cannot yet claim a place on these leaderboards, it's a great opportunity to check out the new challenges and start planning your strategy for when the season goes live next week.

To view the new Conquests in-game:

If you'd like to view your progress for Conquests from Season 1:


*For the Americas region. Please click here to see when Season 2 begins for your region.

Hotfixes for "Snapshotting" Damage
The hotfixes that rolled out last week prevent "snapshotting" damage buffs, where temporary higher amounts of character damage could be locked in using specific skills or items.
Post by Blizzard (Blue Tracker, Official Forum)
The following hotfixes have been applied:

Server Maintenance on Tuesday
There is Diablo III server maintenance this week, scheduled to last for 6 hours.
Post by Blizzard (Blue Tracker, Official Forum)
We will be performing maintenance beginning on Tuesday, February 10, at 5:00 AM PST and we expect it to be complete at approximately 11:00 AM PST. During this time the game and many web services will be unavailable.

Thank you for your patience.
Recent News
Diablo III: Ultimate Evil Edition
The console Diablo III edition includes all of the Reaper of Souls content, and special social features!
PlayStation 3