The first Diablo III Season has started with a bang, as players flock to the new game mode. Many of the seasonal achievements called Conquests filled up quickly, with the first 1000 players completing each of them. Here at Diablo Somepage, we are now tracking Seasonal characters and gathering data to make Season versions of our data-filled charts and guides. Here is a look at the new Seasonal Legendary items, and tips for leveling up in the Diablo III Season.

Season 1 Begins Worldwide
Season 1 had a staggered release as it rolled out around the world. Here in the United States it is a holiday weekend celebrating Labor Day, and once the Season started a multitude of players quickly leveled up. The ongoing treasure event helps out, providing needed gold for starting fresh in the Season.
Post by Blizzard (Blue Tracker, Official Forum)

Diablo III Season 1 is now live in all gameplay regions! To create a Seasonal hero, select your class, gender, and name as usual, then select the "Seasonal Hero" checkbox on the lower left of the screen. 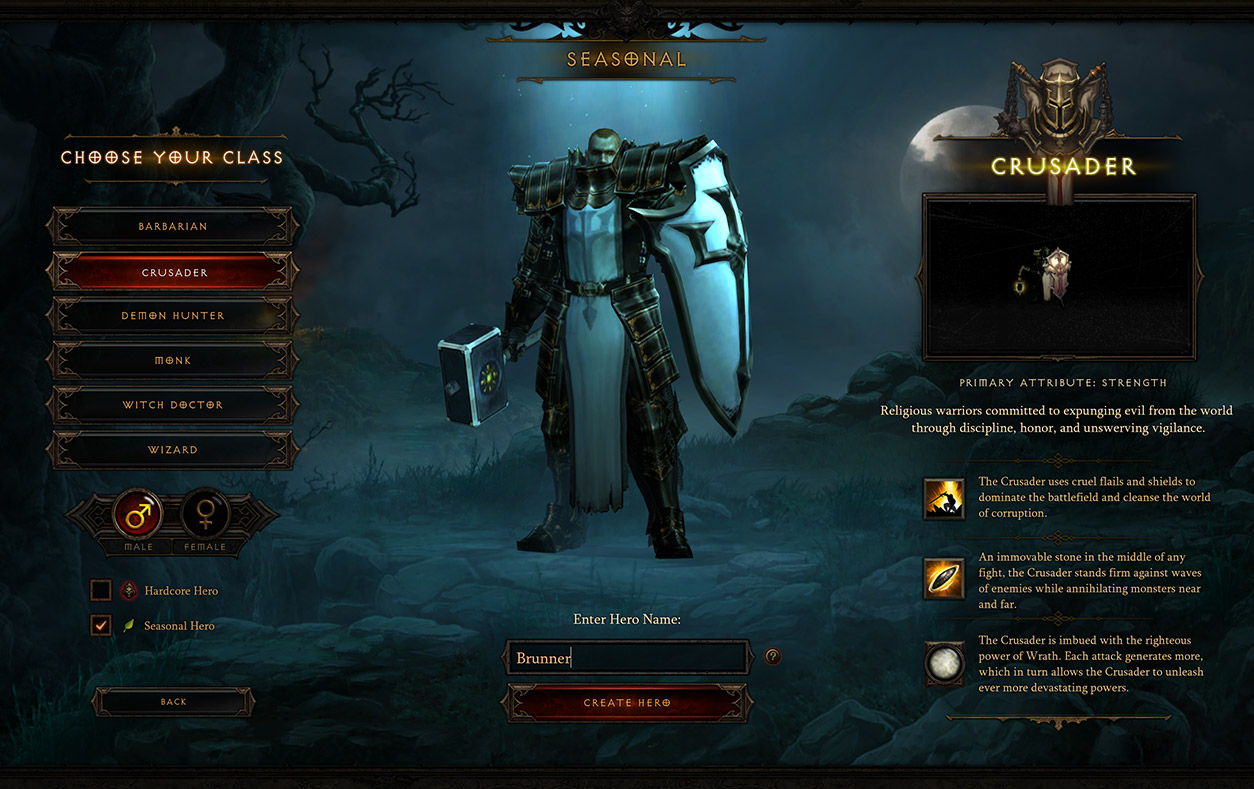 Seasons are an optional, recurring game mode that offers PC players the opportunity to periodically start fresh, leveling new Normal or Hardcore heroes from level 1 without any currency, resources, items, or previously earned Paragon experience. Similar to the separation between Normal and Hardcore game modes, Seasonal heroes will also have their own shared stash and Artisan progression. Any currency, materials, recipes, items, Paragon experience, and Artisan progression earned during a Season will be rolled over to a player's non-Seasonal profile once the Season concludes.

Seasons offer unique rewards and new challenges for players, including new Legendaries, an exclusive Transmogrification set only available to those who compete in each Season, and new achievements called Conquests. Progress within a given Season will also be tracked in our new Leaderboard system.

Good luck, nephalem! May the loot gods treat you kindly and your deeds of valor always be remembered.


Season 1 Legendary and Set Items
Season 1 brings twelve new Seasonal Legendary and Set items. These special items only drop for Seasonal characters while the Season is active. Once Season 1 ends, the items will drop for all characters. The Season 1 Legendaries include three general use items, three Follower special items, and one weapon for each class.


One Seasonal Legendary weapon was added for each of the classes, that boosts a specific active skill for that class. The official Season preview provides other information about this new game mode.

Tracking Seasonal Characters
Here at Diablo Somepage we are working to record all of the stats for Seasonal characters, just as we do for regular Diablo III heroes. That will eventually provide Season-specific versions of the Popular Builds and Skills charts, and the Top Legendaries. We track Seasonal characters just like regular characters, and clearly mark them. An example is the Wizard Xanokk in the recently updated hero display, as one of the many Seasonal heroes we are tracking.

You can Add a BattleTag so your characters can be tracked as part of our data, both Seasonal and regular ones. If you are already in our database, our scanners will be automatically updating your characters every few days, gathering data on all the characters and Seasonal Paragon Levels. We have improvements coming soon to make that process smoother.

Diablo III Leveling Tips in Patch 2.1
If you are looking to level up a new Diablo III character, whether in Seasons or not, it helps to have tips to speed up the process. A video by YouTuber Rhykker gives some great info for leveling quickly. The related reddit thread has more discussion on ideas to help speed the leveling process.

Keep informed with the Diablo III news, and info about our new guides and charts. Follow Diablo Somepage on Twitter, Facebook, or Google+ for the latest updates.
Recent News
Diablo III: Ultimate Evil Edition
The console Diablo III edition includes all of the Reaper of Souls content, and special social features!
PlayStation 3