Actions are taken against players who abused the exploit 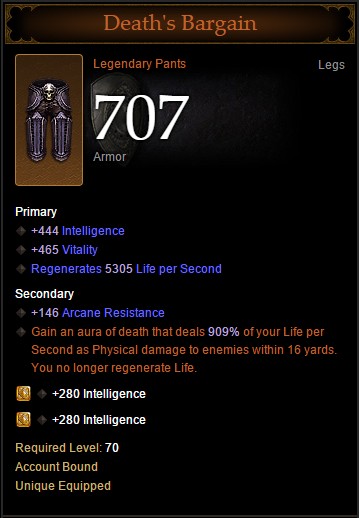 A big batch of Diablo III hotfixes have gone live, reactivating the power for the Death's Bargain Legendary pants. Blizzard has taken action against players who abused the recent exploit with those pants, and the Leaderboards have been updated as those players were removed. The latest hotfixes also include a fix for the Witch Doctor Zunimassa's Haunt set. Here are all the details!

Patch 2.2.0 Hotfixes
The new hotfixes have cleaned up some annoying bugs that had cropped up since Patch 2.2 arrived. The multitude of creatures from the Gelatinous Sire treasure goblins in multiplayer mode has been reduced to a more appropriate amount, along with other fixes.
Post by Blizzard (Blue Tracker, Official Forum)
The hotfix list has been updated:

There are no additional upcoming hotfixes at this time.

Death's Bargain Affix Re-Enabled
The combination of the bugged Death's Bargain along with other items made for a huge amount of damage. That bug was quickly stopped with a hotfix that disabled the Legendary power of those pants. The new hotfixes re-enabled the affix in a proper manner. As with the previous exploit, players who clearly abused this exploit have been actioned, and removed from the leaderboards.
Post by Blizzard (Blue Tracker, Official Forum)
UPDATE - May 5 @ 5:40 p.m. PDT

This issue has been resolved. We know a lot of you have questions about this resolution, so weâ€™d like to provide a quick summary and some additional insight.

Once the unintended interactions between Deathâ€™s Bargain, Rogarâ€™s Huge Stone, and Molten Wildebeestâ€™s Gizzard were discovered, we set straight to work on a hotfix to resolve the issues they caused. However, we knew this hotfix might take some time and some of the nastier repercussions of this bug included game crashes and decreases in game performance.

As an interim solution, we temporarily disabled the Legendary affix on Deathâ€™s Bargain until we could complete testing and deploy a proper fix. This hotfix is now live as of May 5, 2015, and we have reactivated Deathâ€™s Bargainâ€™s power so that it is once more available for use.

In addition, we agree that players should remain on a level playing field throughout the Season and have reviewed the leaderboards, removing any individuals who were found to be using this particular arrangement to obtain unusually high rankings. As in the past, we opted to action accounts on a case-by-case basis. This issue was identified and disabled quickly and, as a result, very few individuals were found to have taken advantage of this situation.

Thank you to everyone who made time to report this issue to us. We love that the vast majority of our fans opt to Play Nice, Play Fair, and we will continue to monitor and maintain the fair and fun gameplay experience youâ€™ve come to expect.

Patch 2.2.1 Updates on the PTR
The small patch 2.2.1 continues on the Public Test Realm, and was recently updated with another small build to version 2.2.1.31563. This minor patch is primarily for bug fixes in the current Diablo III regions; it also contains some of the technical setup for the free-to-play edition of Diablo III that is coming to the Chinese region. As noted by Nevalistis on Twitter, the patch is too small for any substantial game changes.
Any chance for an improvement of the Arcane Dust situation in 2.2.1?

More that it's a very small patch. Crafting, as a whole, is a much larger scope to look at.

Area Damage Issues
A lengthy discussion in the forums about the Area Damage stat pointed out some problems with the affix. Those bugs have been verified by the Diablo III Quality Assurance team, and will likely be fixed in an upcoming major patch that brings improvements to Area Damage across the board.
Post by Blizzard (Blue Tracker, Official Forum)
Thanks to the thorough and specific testing from you all, we kicked this bug over to our Quality Assurance folks for investigation and they were able to verify exactly what's being described:

Area Damage is not benefiting from some skills or unique powers.

This is something we intend to fix, but we're holding off implementing these fixes for the time being as we're reviewing the mechanics of Area Damage as a whole and we want to avoid introducing sweeping changes in the middle of a Season. As a result, changes to Area Damage will not be coming in Patch 2.2.1, but at a later date. I do want to thank everyone who's brought this to our attention and provided detailed reports. Your diligence was extremely helpful!

John Yang on Barbarian Leaderboard
The Diablo III developers don't often talk about their own personal accounts, but they play Diablo III just like the rest of us on the regular servers. Developer John Yang took to Twitter to mention getting on the Era 3 leaderboard with his Barbarian, reaching rank 36 at that time. The Barbarian was equipped with the 6-piece Wrath of the Wastes and 4-piece Immortal King's Call sets, along with a Unity, although the gear has changed since then.