See Diablo III played on the PS Vita, with Remote Play on a PlayStation 4 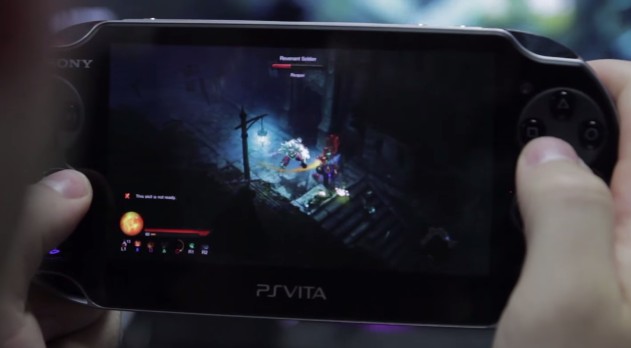 We are less than one month from the release of Diablo III: Ultimate Evil Edition for consoles. It will arrive on August 19, providing an updated version of the game for the Xbox 360, Xbox One, PlayStation 3, and PlayStation 4. A recent promotional video from PlayStation Access on YouTube shows off the Ultimate Evil Edition on the PlayStation Vita, playing through a PS4. A developer interview also provides info about the upcoming console release.

The video is titled Diablo III: Reaper Of Souls - Ultimate Evil Edition: 5 Reasons to Play on PS4. At 1:24 into the video, gameplay is shown of the PlayStation Vita streaming Diablo III. This is through the Remote Play feature, which allows the game to be fully played on the handheld Vita console via wifi from the PlayStation 4. Check out the video to see it in action.

Read on for more details about the Ultimate Evil Edition from the developers.

AusGamers Interview
AusGamers had a lengthy interview and playthrough of the Ultimate Evil Edition with members of the Diablo III console team. Here are some interesting excerpts:

During my time with Julia and Matthew, I was also taking the latest PS4 build of the game for a spin. Obviously for these scenarios the difficulty setting was relatively low, but something felt a little off. No, that’s the wrong word for it… something actually felt a little right. At least as far as being held up against movement on the PC, the console version seemed a little quicker and even perhaps a bit more responsive, but I wasn’t sure if it was just me.

“Funny you should mention that,” Matthew says with enthusiastic glee. “So in the PC version of the game and the original console version of the game, you know, you could destroy pieces of the environment [and] you get a little bit of experience; if you killed enough monsters you get a Massacre and you get a little bit of experience, and we took these features and we put them under the umbrella of what we’re calling ‘Action-Combat’ and we tweaked them in a way that they sing even more.

“So for instance, if you destroy a set number of [pieces of] the environment in a short period of time, instead of just giving you experience we’re going to give you a speed boost for a certain amount of time,” he explain. “Sometimes you’ll notice you have the little speed trails behind you -- that’s because you guys destroyed some elements of the environment and you got a speed boost. When you do a Massacre, instead of going “oh, hey you’ve killed 25 monsters here’s a bit of experience”, as soon as you hit the minimum threshold for a Massacre we’re going to show a counter on-screen and you’re going to see it count up and a timer go down if you’re in danger of your Massacre going away. [But] then once it’s over, we’re going to give you a lot of experience.

“So [what] this means is instead of, you know, accidentally killing 25 people and going “oh that’s cool, I killed 25”, you can [now] stretch that Massacre until, like, 50, 100, 200… and really just get that streak going. And the other thing we did was we’ve tied Nephalem Glory to your Massacre, so as you’re hitting some of the thresholds, we’re going to spawn Nephalem Glory orbs and so you have to go grab [them] -- and maybe run the risk of losing your Massacre -- but if you do (grab them) all of a sudden you’re more powerful and so your Massacre might even be a little easier to keep.”

The enthusiasm both devs have for these few additions of the many we’re going through is, as always with Blizzard peeps, infectious. What’s great though is while I’m being told these things, they’re actually happening on-screen and it’s all very straightforward. In fact, you can be a veteran from the PC life of the series ready to retire your desktop crouch-sitting in favour of a laid-back couch game and you’ll likely heavily respect the seamlessness of it all. Diablo in its original form, in many ways, could be a lot of work and the ideology behind a lot of these changes on console is that it shouldn’t be. It’s not that it’ll be easy, by any measure, rather the things that should be streamlines have been and the things that should be fun and challenging have been embraced and expanded upon.

“The final element of Action-Combat we’ve added is Trap-Kills,” continues Matthew. “So you could always kill people with traps in our game, but we’ve increased the damage so it’s easier, and every time you kill monsters with traps, we’re going to give you increased Resource Regeneration.

“So you were always playing the game this way, we’re just embracing this and giving you even more reasons to do it and more reasons to change the rhythm of your game a little bit because, you know, as you’re chasing a Massacre result, you might end up getting too many monsters attacking you at once.”

The console game also flags loot drops that are specific to characters so you’re not sifting through items that aren’t there for you. Moreover, anyone can pick up loot and it’ll go to the character it’s meant to, regardless of who’s collecting. Again, it’s all part of the streamlining process, which again isn’t meant to dull the experience, but rather expedite your shift in and out of monster encounters. Breathers and micro-management are one thing, but when you’re pulled out of the action too long because of lengthy and trivial things like picking up loot, the way the game works now makes much more sense.

“On console there are very few restrictions on what you can give other players, very few things are account bound,” Matthew reveals.
Read the full interview for even more info, including full details on how the Nemesis system will work.


Legendary Items Not Account Bound on Console
As noted in the interview, most items will not be account-bound in the Ultimate Evil Edition. The details of that were clarified in a blue post.
Post by Blizzard (Blue Tracker, Official Forum)
Jumping in to lend a bit of clarification.

Some items will still be Account Bound (like pre-order bonuses, for example). With that, when playing in a local co-op game, loot will be flagged when it drops for specific players in the group. For example, if Player 2 is a Demon Hunter and Player 1 is a Wizard and a pair of pants drop that have stats a Wizard would benefit from, the item will automatically be flagged for P1. Even if P2 runs over to loot the pants, they will go to P1’s inventory anyway. This helps streamline the experience of sorting through loot drops.

Additionally, when Legendaries drop, there is a chance a Player Gift will drop for someone on your Xbox Live or PlayStation Network friend’s list that also plays Ultimate Evil Edition, which you can send to them via the in-game Mail system either directly from your Inventory or at the Mailbox. The Player Gift will be targeted (i.e. it’ll roll as smart loot) to the character your friend chooses to open the Player Gift on.