Overhaul to skills like Exploding Palm and Legendary items including Vile Ward, plus Legendary gems arrive 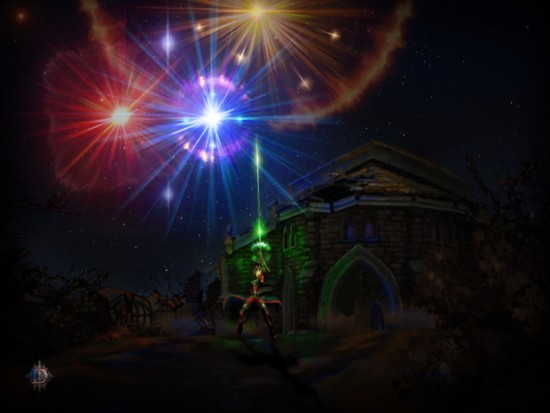 The next build for the Diablo III Patch 2.1 PTR will bring major changes and additions. These include revamping skills such as the Monk skill Exploding Palm, and Furious Charge for Barbarians. The first implementation of Legendary gems will arrive to be tested, along with new powers for Legendary items like Vile Ward.

The big celebration this weekend in the United States is the 4th of July holiday, and the Diablo community team celebrated as well, as seen in the image above. Before heading off for the weekend, there were many Blizzard Blues posts about changes coming soon in patch 2.1, as well as thoughts from Diablo III developer Wyatt Cheng. Here is an overview of the changes discussed for the next Patch 2.1.0 Public Test Realm build:


Read on for all the details in the Blizzard Blues posts and from developer Wyatt Cheng, plus a question from Mr. Cheng about changing gear throughout Greater Rifts.

Teleporting Out of Greater Rifts
Currently for Greater Rifts, players cannot change equipment or skills inside the Rift. However, it is still possible to go back to town and swap out gear. It has become common for players to use standard gear through most of a Greater Rift, and then teleport back to town to equip items like The Furnace, to kill the Greater Rift end boss. Mr. Cheng asked for feedback about this game mechanic.

What's your opinion: TP'ing to equip Furnace during GRift is valid strategy we should keep or inevitable min/max we should save people from?


Rewards from Greater Rifts
The next PTR build will bring the first iteration of the Legendary gems, but the main reward system for Greater Rifts won't start being tuned until the build after that.
Post by Blizzard (Blue Tracker, Official Forum)
Hi!

The reward scheme for Greater Rifts is still under heavy iteration at this time. We are primarily concerned with the gameplay mechanics: acquiring a key, progressing through the rifts, difficulty tuning, multiplayer dyanmics, etc.

The reward needs to be proportional to the effort and time invested. With the mechanics of Rifts changing this is a moving target. In the next PTR patch you'll see more of the Legendary Gem reward mechanics implemented. The PTR patch after that we'll start dialing in the reward structure.

Please feel free to give feedback on what you see, but please know we are aware that the reward is off right now. Our goal is for Greater Rifts to be absolutely worth doing, and you should always be trying to clearly quickly towards the highest tiered rift you are capable of - but we're not there yet.

Class Balance Changes on the PTR
The next build will include skill tweaks and balancing, and Nevalistis replied to some specific Barbarian issues when reviewing those changes.
Post by Blizzard (Blue Tracker, Official Forum)
Let me preface this with something that's acknowledged in the OP but I want to reiterate: We've only just started, and you're looking at a first pass on a lot of things. What's currently on the PTR is not 100% indicative of what to expect when Patch 2.1 hits live servers.

As a test realm, it's as much our playground as it is yours for experimenting and trying new things. Some of those things work, some of them don't and need additional attention. In any event, there's more to come, particularly when we launch the first test Season on the PTR.

Okay, so understandably snapshotting feels clunky and pretty undesirable in regards to how the CotA is being used on live servers currently. However, improved AI simply is not compensating for the removal of snapshotting. Especially in regards to the Ancient's Fury rune, CotA simply does not do enough to be worth it.

Snapshotting isn't something we plan on keeping in. As you mention, it's clunky and it encourages awkward gameplay that we don't want to be the norm. That said, we have (and will continue) to pass on your feedback and concerns. It's possible CotA may warrant another look.

The truth is though, that the damage output of this set is too underwhelming to justify using the Raekor set and this is a symptom of the skill Furious charge itself.

There's a bunch of awesome Furious Charge changes coming to the PTR soon™. We’re making some improvements to its pathfinding, increasing its travel distance and speed, and polishing it up to make sure using this skill is a more smooth experience. Items will also synergize better with Furious Charge – Vile Ward is being revamped with a sweet new Legendary power for Furious Charge and +% Damage to Furious Charge is being added as a possible item affix for 2-handed Mighty Weapons, Shoulders, and Chest pieces. Overall, you should see some significant buffs here. Hopefully they'll all be making the next PTR build and you can let us know how they feel! :)

We're super slammed with reading through and passing on all the awesome feedback you guys are providing, and our devs are hard at work on additional class and item changes, balancing the Greater Rift reward systems, getting Seasons up to snuff for testing, and a plethora of other stuff I'm sure I'm forgetting right this moment. As we get more info and patches out there, we're eager to see your reactions and to hear what you have to say about upcoming changes.

Wizard Channeling Skills
The initial patch 2.1.0 PTR build added an initial Arcane Power cost to Wizard channeling skills like Arcane Torrent, Disintegrate, and Ray of Frost. That cost will be removed again, and other changes made in the next build to make channeling skills more attractive.
Post by Blizzard (Blue Tracker, Official Forum)
Posted by: PieHole06/25/2014 08:23 PM

I don't really see the need for this nerf.

I don't think our philosophy quite matched up with the actual changes that took place. Channeling spells, as the name implies, should be most effective when time is spent channeling them for a few seconds.

We recognize the additional Arcane Power costs we implemented in the initial 2.1 PTR didn't accomplish this goal, but rather disincentivized using these skills. In the next PTR, you'll find we've removed the upfront Arcane Power cost from Arcane Torrent, Disintegrate, and Ray of Frost. In addition, the damage these abilities do with now scale upward over time, rewarding you for spending additional time channeling.

These changes more accurate portray our design intent for these skills - that the longer you channel, the more reward it brings. Let us know what you think, especially once we patch the PTR and you can give these changes a try in practice. :)

Exploding Palm Redesign
Wyatt Cheng had a few posts about the issues involving skills and items that do a percentage damage of a monster's health, such as Exploding Palm for Monks. As he also mentioned in a related post on reddit, the developers do not want Monks to just be a "one-trick pony" of zDPS builds, and they're looking to change up and make other playstyles viable for the class.
Post by Blizzard (Blue Tracker, Official Forum)
Congratulations to these folks!

I will echo the sentiments of others - this is why we have PTRs. A huge thank you to everybody who has been helping us test rifts thus far. Our internal testing team identified a number of skills and items to keep an eye on and Exploding Palm, Rimeheart and the Furnace were all on the list. The dedicated players on the PTR have shown what is possible when the game is stretched to the limits.

We're looking to make changes to Exploding Palm in the next PTR patch. Of the three (Exploding Palm, Rimeheart and the Furnace) we feel this is the biggest offender. It's not clear if Rimeheart is as offensive if you're not able to further transfer the resulting damage onto elite monsters via Exploding Palm.
Exploding Palm does indeed make it hard to discern where Monks stand without it. We'll take an honest, hard look at them and make any further adjustments as necessary.

Difficulty of Greater Rifts
The overall difficulty scaling for Greater Rifts will be shifting in the next patch, as the developers work to find the sweet spot for that new end-game system.
Post by Blizzard (Blue Tracker, Official Forum)
Posted by: Guts07/02/2014 11:24 PM

Anyone has any rough idea.

There isn’t a direct correlation between Greater Rift difficulty and the usual difficulty modes. They are independent from one another, though you can make rough comparisons through your own experimentation.

However, we do plan on tweaking the difficulty scaling in the next PTR patch, so you may find those lines different from what you’re experiencing now and perhaps a bit easier to draw. We really appreciate the feedback we've received on Greater Rifts so far, and we look forward to seeing your thoughts in the next PTR patch!

In D3 console, will D3 characters with few legendary in stash/wearing be able to transmogrification in UEE?

If not, can we just drop it then pick it up in order to get transmogrification?

Are you asking if legacy Legendary items (ones that you currently have) will unlock as a Transmogrification option once you import your characters to Ultimate Evil Edition?

This is a good question, and it turns out the console version is going to work differently than the PC counterpart. Legacy items from the original Diablo III will automatically be unlocked as Transmogrification options in Ultimate Evil Edition. You won't need to find those items again, so be sure to hang onto any Legendary that look the way you want.

*Edit: This information is no longer accurate, and an update can be found right here.*

Keep up to date with all the current Diablo III issues by checking out the latest Blizzard Blues posts in our Blue Post Tracker or RSS feeds.
Recent News
Diablo III: Ultimate Evil Edition
The console Diablo III edition includes all of the Reaper of Souls content, and special social features!
PlayStation 3