An early look at Legendary gems in Diablo III patch 2.1 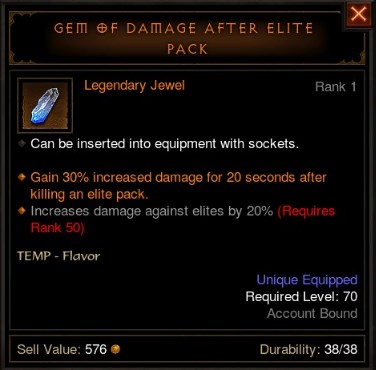 A new feature coming in Diablo III Patch 2.1.0 is Legendary gems. They are made for sockets in rings and amulets, and will provide special powers not available from standard gems. While Legendary jewels currently aren't fully active on the patch 2.1 PTR, enough details have slipped through to allow an early look at how they may play out.

It's important to keep in mind that this is all still early and unofficial data, as the Legendary gems have not been fully activated yet on the Public Test Realm. A blue post makes that clear:
Post by Blizzard (Blue Tracker, Official Forum)
We're still developing and designing Legendary Gems, so they have not yet been implemented. They're just not ready for testing on the 2.1.0 PTR right now. Once we've fleshed out Legendary Gems a bit more, we'll patch them in with a later PTR build. Each PTR patch will be accompanied by patch notes (published in the PTR launcher and the front page of this site), so just keep an eye on those notes to see when Legendary Gems become available. :)

Legendary Gems are still undergoing significant iteration at this time, so you won't see them available on the PTR right away. The gist is that these gems are infinitely upgradeable, and provide special Legendary powers when socketed into the appropriate gear slot. They can only be socketed into Rings and Amulets, and can be upgraded by completing additional Greater Rifts. The higher you place in a Greater Rift, the more likely your gem will be successfully upgraded. We'll have more details in the future as we continue development on these powerful baubles, so stay tuned!


There are a few parts of the Legendary gem system that have already showed up. The first is that one of the gems did drop, as seen in the image above. The obviously placeholder name will be changed in the future, but the Legendary gem stats are interesting. The fixed stat is Gain 30% increased damage for 20 seconds after killing an elite pack. The other stat appears to be upgradeable, and starts at Increases damage against elites by 20%. This ties into the idea that the gems will be upgradeable by going through higher difficulty Greater Rifts; this one appears to require a Rank 50 Greater Rift before it can be upgraded further.


A reddit thread has a list of the possible Legendary gem stats, taken from datamining the PTR Diablo III data. It is listed in three parts: the placeholder Legendary gem name; the fixed stat, and the upgradeable stat. The internal calculated numbers are shown in these item stats, but it is easy to get a feel for the type of Legendary powers that the developers are looking to add with the Legendary gems.

So how will those Legendary gems be upgraded? We also have an early look at the new Artisan for that. There seems to be a small chance that Urshi will appear at the end of a Greater Rift run (after the Greater Rift boss has been killed, but if the timer was not reached). It appears that he will be able to upgrade those Legendary gems, although it is not known what that will cost, or how far the upgrades can go. 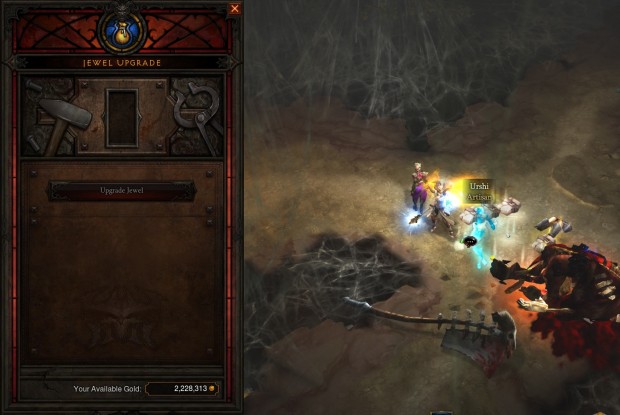 So there we have a sneak peak at what may be the upcoming system for Legendary gems in patch 2.1.0. They will be fully implemented on the PTR in the coming weeks, and we'll be able to fully test out this new addition to the game!
Recent News
Diablo III: Ultimate Evil Edition
The console Diablo III edition includes all of the Reaper of Souls content, and special social features!
PlayStation 3