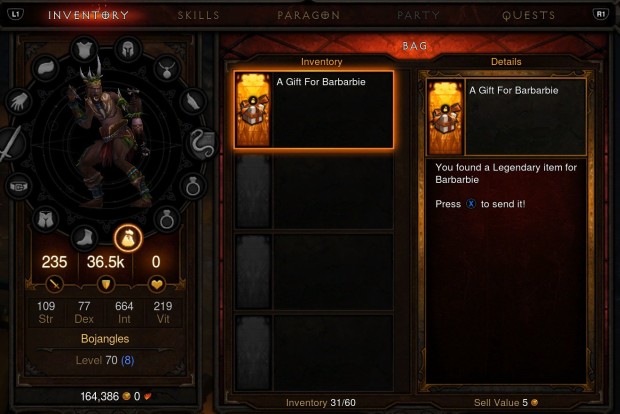 The upcoming console game Diablo III: Ultimate Evil Edition will be released on four consoles: Sony's PlayStation 3 and PlayStation 4, and Microsoft's Xbox 360 and Xbox One. While most of the game is the same regardless of the console, some features vary depending on the console used. The Diablo developers provided details at E3 last week, including resolution differences between the PS4 and Xbox One. These go beyond the promotional PlayStation-only goodies found in the game.

The Ultimate Evil Edition builds on the success of the PC version of Diablo III: Reaper of Souls. It includes all the expansion content up to at least patch 2.0.4, along with some new social features designed for the console edition. The Gift system is one of those features, as seen above. Any time a Legendary drops for a player there is a chance that another item can also be sent to one of their friends, which will be a useful Rare or occasionally a Legendary item. Here are other details from E3 interviews.

See all of the E3 Ultimate Evil Edition preview screenshots! 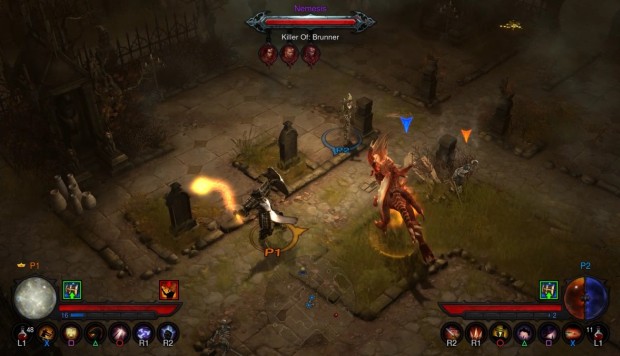 Read on for more info from The Escapist, discussing many new features of the Ultimate Evil Edition. One of those is the amusing Nemesis feature, seen above.

I got to check out the PS4 version of Reaper of Souls, with the Blizzard team highlighting some of the important - if minor - gameplay updates. Each individual change is relatively small, but when you add them all together, it makes for a fantastic experience. The core gameplay is still exactly what you'd expect, but things like Massacre and Destruction Bonuses have been improved for the console release.

Instead of getting a notification only after your Massacre Bonus, you now get a running tally on screen showing you your current kill count. Kiting groups of mobs together to boost your Massacres now offers some very real benefits. Each Massacre Bonus now gives you a short term damage buff. Likewise, Destruction Bonuses now offer a short term move speed buff. Not only that, but they've boosted the bonus experience to levels just shy of ridiculous to really motivate players.

The Loot system has been improved once again. When playing local co-op, each item that drops is tagged for P1, P2, etc. Any player can pick it up, but it goes directly to its owner's inventory. If you've played a ranged class alongside a melee class in local co-op, you know how annoying it can be for the melee to pick up everything, and then have to redistribute the items. This change is bound to alleviate a lot of inventory management time in co-op, which is certainly welcome.

There's a Mail system now as well, allowing you to send items - most of which will not be account bound, like they are on PC - like gems, legendary crafting materials, even gold to your friends in game. This isn't the only social improvement, either, as they've introduced the Gift and Nemesis systems as well.

With the Gift system, every time a Legendary drops, there's a chance a Gift for one of your friends that plays will drop alongside it. When you pick it up, it mails it directly to that player. Your friend can open it on any character for a high-value Rare, and a chance at a Legendary. It's a great way to help your friends gear up lower level characters, where Legendaries often seem few and far between.

The Nemesis system is basically the exact opposite of Gifts. Whenever you die to a normal, non-elite/unique monster in game, there's a chance it will level up into a Unique monster, open a portal, and hop into your friend's game. If your friend manages to take it down, you'll both get a small reward, but if it takes your friend down, it levels up again, getting more powerful, and hopping to another friend's game. This can create something of a cycle of slaughter as it gets more and more powerful, so there's a safeguard in place to prevent it from spiraling out of control. After five players, the Unique monster will retire, and you and all your friends will have to live with the shame of letting it get away.