A look behind the scenes of fantastic Diablo III art

The fan artist contest last year to celebrate the Reaper of Souls expansion was won by Russian artist Andrey Kuzinskiy (Kuzinskiy), with his work New Evil. As part of the grand prize package, Kuzinskiy traveled to Blizzard's headquarters in Irvine California. Check out the behind the scenes details of the trip, and some terrific art!

Last year, artisans from around the world rallied the tools of their trade to portray heroes of Sanctuary or Malthael preparing for the coming conflict in the Reaper of Soulsâ„¢ Fan Art Contest.

When the dust settled, New Evil by Andrey Kuzinskiy (Kuzinskiy) was declared the grand prize winner. In the months thereafter, Andrey received his prize package, as well as a once-in-a-lifetime reward for his efforts: an action-packed trip all the way from Russia to Blizzard HQ to meet the artists and developers that inspired him.

In celebration of his journey, we've released a video which documents Andreyâ€™s journey into the heart of Blizzard HQ, and we invite you to check it out below:

During his visit, Andrey had the opportunity to chat with Blizzard employees from across the company, and tour development areas for Diablo III, World of Warcraft, StarCraft, Heroes of the Storm, Hearthstone, and many more! In addition to the contest's prize package, during the tour of Blizzard HQ Andrey also received an original sketch from Sam Didier, a caricature from Anvil and the Storyboard team, a signature from Mike Morhaime, and a bonus goodie-bag from the awesome folks in Blizzardâ€™s Licensing team, which was crammed full of Blizzard Gear and other collectables! 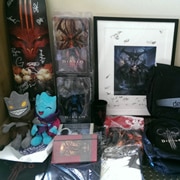 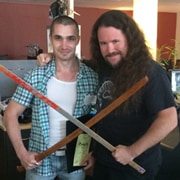 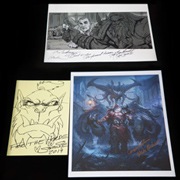 DeviantArt and Blizzard have just launched a comprehensive interview page with Andrey which includes a Q&A, photos of his action-packed visit, a walkthrough of his winning piece, and more! You can learn more about the winning artist behind the Reaper of Soulsâ„¢ Fan Art Contest in our contest wrap-up here.

Thank you to Andrey and all contest participants being a part of our creative community!

Are you interested in participating in another epic Blizzard fan art contest that spans the realm of Sanctuary and beyond? Nowâ€™s your chance, because you and all of your friends can join the fight for the Nexus! Assemble the mightiest heroes from across Warcraft, Diablo, Starcraft, and more in the Heroes of the Storm Ultimate Fan Art Contest!