A look at the potential schedule for Season 2, and eventually patch 2.2.0 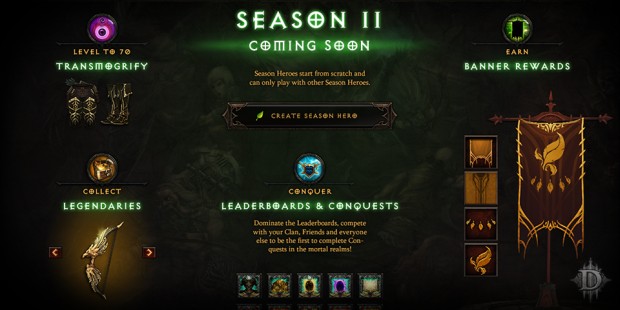 Diablo III Season 2 is expected to last only a few months, which is much shorter than Season 1. Recent Blizzard Blues discussions delved into the planned schedule for Season 2, and eventually the arrival of Patch 2.2. Here is a look at the likely dates for the upcoming Seasons and the next big content patch.

Season 2 Duration Scheduled for a Few Months
Season 1 started on August 29, 2014. Assuming it wraps up on February 3, Season 1 will have run for just over 5 months. The initial goal for Season 1 was to last only a few months, and that is still the duration that the Diablo team is looking to reach with Season 2. Nevalistis stopped by reddit to provide the details.
Post by Blizzard (reddit)
I hope season 2 doesn't last as long. I quit around early November. Diablo 3 isn't really a marathon game to me, something fun to play for a bit, but it gets really repetitive after awhile.
I am however ready to play some season 2!

We agree Season 1 was too long. We had originally planned on a few months, and things just didn't go as planned. We're aiming for the "few months" again with Season 2.

Planned Dates May Change
The dates listed above include scheduled dates that the Diablo III team wants to hit. As noted by Nevalistis on Twitter, the dates are targets, but at any point they can change based on technical issues that need to be dealt with.


The end of Era 1 has been announced; it will be coinciding with the end of Season 1: http://t.co/tUsbgDeLln pic.twitter.com/c551WmPZH3

@Narull The reason we use that terminology is in case technical issues arise. The date listed is our target date, though. :)


New Class Sets in Patch 2.2.0
At least 3 new sets will arrive in patch 2.2, including 1 new class set each for Barbarians, Demon Hunters, and Wizards.
Post by Blizzard (Blue Tracker, Official Forum)
The new sets - including Delsere's Magnum Opus, Wrath of the Wastes and Unhallowed Essence - are currently planned to arrive in patch 2.2.0, along with updates to existing 4 piece sets. While this could change depending on a variety of factors, and while we don't have a date to announce yet for that patch, the plan is for all of these to arrive at around the same time.

Hotfix for Goblin Loot
A hotfix went live last week that combined the massive amount of loot which drops from Treasure Goblins. This reduces the time needed to pick up everything, after slaying one of those tricky fellows!
Post by Blizzard (Blue Tracker, Official Forum)
The following hotfix has been applied: