Blizzard Blues on the latest progress in the patch 2.1.2 PTR 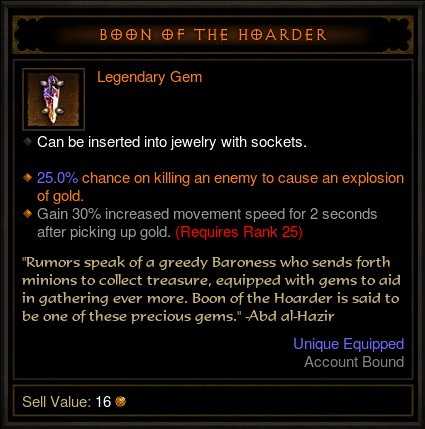 Not every copy of the Boon of the Hoarder will be found in The Vault, as replacements can be obtained in Greater Rifts. The latest Blizzard Blues topics discussed that, along with progress on the patch 2.1.2 PTR. More fixes were made for the Demon Hunter Marauder class set bonuses, as one of the class sets updated in patch 2.1.2. Other topics included Ancient versions of Hellfire Ring and Hellfire Amulet items, and saving Horadric Caches for patch 2.1.2.

This should only happen if you've previously found a Boon of the Hoarder. Primarily, we want to make it easier for Hardcore characters to reacquire one should they lose it to a Hardcore death.

So, in any event, you'll need to find the Vault at least once before you can acquire a Boon of the Hoarder.

Ancient Hellfire Amulets and Hellfire Rings
The new Ancient Items in patch 2.1.2 will be available for all Legendary items, including the crafted Hellfire Ring and Hellfire Amulet. It is already hard enough to get a Hellfire Amulet with great stats and a useful passive skill on it, so obtaining one of those that is Ancient will be a rare occurrence indeed.
Post by Blizzard (Blue Tracker, Official Forum)
Posted by: Coins11/20/2014 05:37 AM

I saw on a blue post that you could get ancient items from crafting. Can anyone confirm that we can get an ancient hellfire ring and amulet?

Any Legendary has a chance to roll as Ancient. This includes both the Hellfire Amulet and the Hellfire Ring (as well as Horadric Cache-specific Legendaries, like Ring of Royal Grandeur). It's worth noting, though, that the Ancient modifier does not alter Legendary affixes.

In short, an Ancient Hellfire Amulet won't give you additional passives. However, applicable stats, like Dexterity or Life on Hit for example, will benefit from the Ancient upgrade.

Hoarding Horadric Caches
The Horadric Cache from bounties can contain specific Legendary items. It won't help to hoard up caches before patch 2.1.2 arrives in the hopes of getting Ancient Legendary items, though, since only new caches will have those uber items.
Post by Blizzard (Blue Tracker, Official Forum)
Posted by: Riffmaster12/11/2014 06:00 PM

Hi Neva. Regarding cache servers... If we farm them now and open them when the next patch hits live, can the specific legendaries from these farmed caches roll as ancient items?

Focused Feedback for Patch 2.1.2
The latest PTR build brought more changes to the class sets that are being updated in patch 2.1.2. They are part of the focused feedback, that the developers are looking to obtain from players on the PTR. There was also a hotfix on the PTR specifically to take cace of a lingering issue with the Demon Hunter Marauder set.
The original post has been updated with our latest round of Focused Feedback topics. They are as follows:


Update to the Story of Diablo
The story for Diablo, in the official game guide, was updated with a new chapter. This expands the story to cover the events of Reaper of Souls. It is worth delving into if you wish to learn the overall history for the Diablo games.
Post by Blizzard (Blue Tracker, Official Forum)

We've updated The Story of Diablo with the events of Reaper of Souls! Learn the fate of the nephalem as they face Malthael and his army of Reapers.