Patch 2.1.2 PTR Planned for This Month

Clan improvements are part of the next big Diablo III patch

Diablo III patch 2.1.2 is on the way! The next major content patch is being worked on by the developers, to get it ready for public testing sometime this month. The latest Blizzard Blues posts detail changes coming in the patch, including news about Clans, new Legendary Gems, and powerful Ancient items.

Patch 2.1.2 PTR in November
The developers are working on getting the next patch stable enough to be tested publicly. It will likely roll out on the PTR over the next couple of weeks.
Post by Blizzard (Blue Tracker, Official Forum)
Posted by: Understray11/12/2014 02:41 PM

PTR isn't open.
That is correct!

The PTR for patch 2.1.2 is not yet available. We're looking to launch it sometime this month (which may change depending on our development schedule). When the PTR does go live, we'll post our usual "PTR Now Available" message on the front page and on the current set of PTR patch notes.

Clan Improvements Are Coming
The next patch will bring some needed improvements to the Clan social system in Diablo III. The ability to sort members by offline duration is one addition on the way. This will be useful for Clan leaders to weed out inactive players, to make room for more new members.
Post by Blizzard (Blue Tracker, Official Forum)
The ability to see how long a clan member has been offline is coming in the PTR for patch 2.1.2, along with the ability to sort clan members by offline duration (as well as some other social improvements). Keep an eye on the upcoming notes for patch 2.1.2, and let us know what you think of these new features on the PTR!
Posted by: MisterAjikko11/11/2014 05:29 PM

can you also make it so that we can pass our leadership to active members if the clan leader stopped playing the game for very, very long time too?
Posted by: chrisloup11/11/2014 08:02 PM

Clan join date would be nice aswell.
Good ideas. I'll pass them along to the team. Thanks, guys! 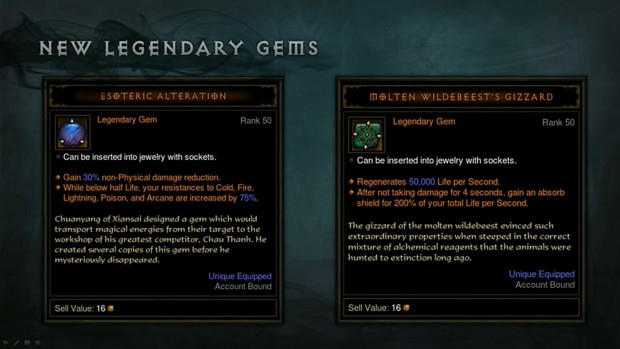 New Legendary Gems in Patch 2.1.2
Two new Legendary gems will be added in the patch. The stats for them are shown above, as they were presented at BlizzCon, and at level 50. Tyvalir noted that the gems are still being worked on by the developers, and may also change during the testing process on the PTR.
Post by Blizzard (Blue Tracker, Official Forum)
The new Legendary Gems are a work in progress, and the numbers you saw during our BlizzCon panels will likely change over time as players test them on the PTR server, and as we continue collecting feedback from the community.

It's great to hear your early insights into one of them, though. I'll be interested to see what new insights you have once you've sampled its powers on the PTR! :)

Ancient Legendary Items
One of the additions in patch 2.1.2 are Ancient Items, extra-powerful versions of Legendary and Set items. These are designed to be obtained through regular drops, crafting, and from gambling with Blood Shards at Kadala.
Post by Blizzard (Blue Tracker, Official Forum)
Great question!

While we can't say for sure how rare they'll be just yet (since they haven't been tested on the PTR), I can confirm that crafted Legendary and Set items will have a chance to roll as Ancient items, regardless of the difficulty in which you're crafting.
Posted by: UncleTouchy11/11/2014 03:33 PM

Good to hear. But how about Kalada and ancients?
Good question! The current plan is for Ancient items to also be obtainable from Kadala. The chance for this to occur has yet to be tested on the PTR, so (like all things) it could change based on player feedback and our internal data.

Testing Drop Rates on the PTR
The PTR is designed to be as accurate as possible a representation of the live Diablo III servers; because of that, there usually are not any special boosts in drop rates.
Post by Blizzard (Blue Tracker, Official Forum)
Posted by: Rigaudon11/11/2014 06:55 AM

As much as we like feedback on how it feels to finally wield powerful new items, it's just as important that we get feedback on whether an item feels too rare or too common. That said, we appreciate you all taking the time to find items on the PTR, take them for a spin, and tell us what you think!

Legendary Workshop Ideas for the Future
The recent Legendary Workshop community event at BlizzCon 2014 had a slew of interesting ideas for Legendary items. Although only one Legendary power was chosen at the workshop, more of those ideas may appear in future Legendary or Set items.
Post by Blizzard (Blue Tracker, Official Forum)
Posted by: vicious11/10/2014 12:48 AM

Can we have some feedback about the legendary worshop?
Hey there, vicious. The dev team reviewed the ideas submitted prior to the Legendary Workshop, and picked the best ones to jam on with our guest designers during the panel. In the end, they chose an item that buffs different Elemental damage types in a set rotation. You can find out more about the panel in our recent blog post.
Posted by: MasterSpark11/12/2014 06:58 AM

Only 1 item caught your eye, really?
Several items from the Legendary Workshop caught our eye, actually. Even though only one made the cut (because of how the workshop was designed), we realize the process used to pick the Legendary power wasn't as transparent as it could be.

The upcoming patch 2.1.2 will bring a huge amount of changes and additions to the game. Follow Diablo Somepage on Facebook, Twitter, or Google+ to keep up to date with all the news!
Recent News
Diablo III: Ultimate Evil Edition
The console Diablo III edition includes all of the Reaper of Souls content, and special social features!
PlayStation 3