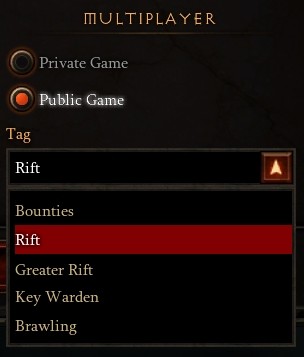 A bug in the multiplayer choices in Diablo III is causing confusion among players, since patch 2.1.1 arrived. That issue was confirmed in recent Blizzard Blues posts, along with a Legendary gem bug, and a preview of six new transmogrification designs that are included with the BlizzCon 2014 Virtual Ticket.

Bug in Multiplayer Game Settings Drop-Down
The drop-down menu for Adventure Mode public games was changed in patch 2.1.1, as seen in the image above. The top option that was a general Monster Slaying was renamed to a specific Bounties. This was to make an option for players who just wanted to do Bounties. Unfortunately, the entire drop-down menu has a bug at the moment. Players choosing one option are put into games for the next option down on the menu. So players choosing Bounties are put into games for Rift; choosing Rift puts a player into Greater Rift games, and all the way down the menu. This has caused confusion for players who chose one option, and found themselves in games where everyone else wanted to do a different activity! This bug has been confirmed and will be fixed by Blizzard. We do not know at this time whether the fix can be done as a hotfix, or if it will require a small client update.
Post by Blizzard (Blue Tracker, Official Forum)
Thank you for the report! The current functionality you described is not intended and indeed a bug we were able to reproduce on our end. We don't have an ETA for when it will be fixed at this time, but we'll be sure to provide an update when we can.

Thanks again for taking to the time to post, and apologies for any inconvenience this bug may cause in the interim.

More Gem Changes Coming
Patch 2.1.1 made it a little easier to Enchant rings and amulets, as the cost was reduced from requiring a Flawless Imperial gem to an Imperial gem. This change was just the first of multiple changes involving acquiring and using regular gems; bigger changes will be part of a future patch.
Post by Blizzard (Blue Tracker, Official Forum)
Posted by: Leviathan25/09/2014 01:16

If thats so, why did they changed it? if it's almost the same as you say, why would it change it?

The change was done as a precursor to future changes that are still in the worksâ€”We're planning to introduce more uses for any gem you have excess of, as well as a way to increase your ability to get specific gems that you are lacking. Since those future changes are further down the road however, we temporarily changed the cost to enchant jewelry in order to make it a little less punishing to add a socket to your rings or amulets

You can find more information about that in this post by Travis Day as well as in the change philosophy description in the 2.1.1 Patch Notes.

Bane of the Powerful Bug
There have been multiple bugs fixed since the Legendary gems were introduced in Patch 2.1. The latest issue being dealt with is a small one with the Bane of the Powerful. That Legendary gem currently activates when the illusion monsters are killed from an Illusionist elite. That is not intended, so it will be fixed in the future.
Post by Blizzard (Blue Tracker, Official Forum)
The damage bonus thatâ€™s applied by slaying Elite monsters with Bane of the Powerful functions differently depending on the Elite(s). In situations where there is a single Elite (like a Treasure Goblin or Act boss) then it's pretty straight forward in the sense that once you kill that Elite you get the buff. When the Elites are in some form of a pack, though, it gets slightly more complicated. The entire pack will need to be slain in order to trigger the buff. That includes every member of a Champion pack, or all of the minions along with their Elite master.

That said, there's currently a bug that allows Bane of the Powerful to apply its bonus damage after killing illusions, which is not intended. We'll be sure to let everyone know through the appropriate channel once that fix is implemented, so be sure to keep an eye out for it.

BlizzCon 2014 In-Game Goodies
BlizzCon 2014 is coming up on November 7-8, and the in-game bonuses were revealed for anyone joining in person or with the Virtual Ticket. The bonuses include 6 new transmogrification designs, inspired by the upcoming World of Warcraft: Warlords of Draenor expansion. See the BlizzCon announcement for another picture of these new styles, and the digital bonuses available for Blizzard's other games. 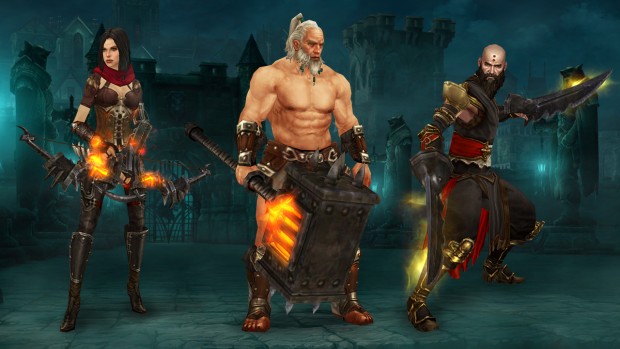