Talking about the 'Ultimate Evil Edition' and new content after patch 2.1 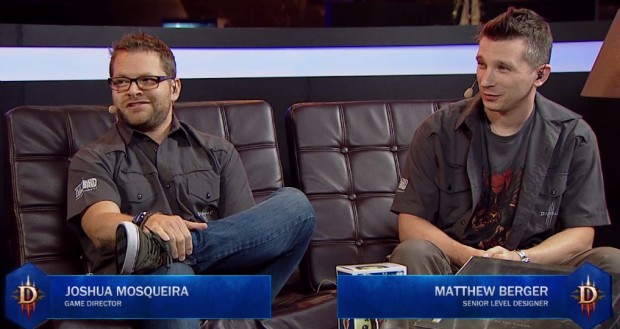 The European gaming convention gamescom 2014 was held on August 13-17, and Blizzard was there in full force. Diablo III developers Josh Mosqueira and Matthew Berger did a whirlwind set of interviews at the show, mainly promoting the Ultimate Evil Edition, which was released a few days after gamescom wrapped up. They also dropped some tidbits about future content for the game. Here are three interviews with the Diablo III team, from gamescom 2014.


In an interview with the Romanian site playtech.ro, there are lengthy discussions of the process of bringing the Ultimate Evil Edition from PC to console, and which is the "best" Diablo III version.


The French site JudgeHype also had an interview with the pair, which was published in French. Here is a translation of part of that interview, where the developers talk about about possible additions to Diablo III after patch 2.1.


Finally, the Diablo III duo stopped by to chat in the official Blizzard stream that ran throughout the show. Starting at 31 minutes into this video, Mosqueira and Berger chat about the Ultimate Evil Edition, and new features in PC patch 2.1.