Blizzard Blues on Patch 2.1 features: Greater Rifts and The Cesspools 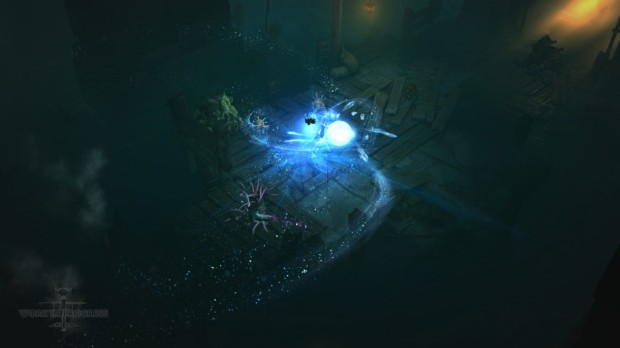 Diablo III Patch 2.1.0 will be arriving on the PTR in the near future, bringing many new features and changes to test. Recent Blizzard Blues posts filled in more details on the Greater Rifts, and a new environment called The Cesspools (shown above). The Clan and Community social aspect of the game will not be receiving major changes in patch 2.1, however.

Many of these details were first mentioned in the earlier Diablo III Patch 2.1.0 First Look and the comments by Travis Day during the Theorycraft Thursday livestream. These new posts fill in specifics, or provide another way of looking at that info.

Bear in mind that you might not need to play through every level of a Greater Rift as you gear up and complete them more quickly. The more quickly you complete a Greater Rift level, the larger a chance you'll have to "jump up" additional levels (and potentially multiple levels if your time is exceptionally fast). Of course, we're still tuning this system, so please be sure to hop on the PTR (once it's available) and let us know what you think!

Makes perfect sense. Tier 1 might be like 'normal', Tier 20 might be like T6, then harder and harder until it's no longer possible to finish before the timer runs out.
That's the gist, though there may not be a perfect comparison between X Rift Level = X Difficulty level. It may take some trial and error and exploration to suss out their measurements, and like Paragon levels, there isn't a cap to this scaling difficulty. Of course, with this feature still in development, bear in mind this all comes with the caveat of being subject to change.

My group "efficiently" farms T6 but we still die several times to certain combos of elites like 3 or 4 packs simultaneously. Those deaths don't really matter currently but in Greater Rifts it'll be game over.
Death in Greater Rifts doesn't end your journey completely (unless you're a Hardcore character, of course). However, it does negatively impact your time as you have to run back from your last checkpoint or wait for a friend to resurrect you. Death should, generally, be avoided, but that's kind of already a rule of thumb. :P

As usual, the normal caveat applies that this is still in development, and possibly subject to change.


Post by Blizzard (Blue Tracker, Official Forum)
Greater Rifts will be available to both Season and non-Season characters as well as the Legendary Gem rewards associated with them. This means everyone will be able to start working on these gems regardless if you choose to participate in a Season.

The standard caveat of this all currently being under development and subject to change still applies, though.

No Clan and Community Changes for Patch 2.1
The Diablo III developers have previously talked about wanting to improve the Clan and Community system that was added in patch 2.0. They view it as just the starting point for that social aspect of the game. But those type of improvements will have to wait for another patch, and won't be arriving in patch 2.1. There will be big class changes in 2.1, though, although only a few of those skill changes have been discussed so far. We'll learn details of the class changes when the patch 2.1 PTR patch notes arrive.
Post by Blizzard (Blue Tracker, Official Forum)
Posted by: Enkeria06/22/2014 12:01 PM

Any idea if the clan function over D3 battle.net will have an upgrade?

We're definitely interested in adding additional clan features in a future patch. Patch 2.1, however, is primarily focused on introducing Seasons and Greater Rifts, along with a few other changes you can read about in our preview blog.

Of course, it's never too early to hear what you'd like to see added to Clans & Communities. :) We've seen a lot of features requested, and we're actively collecting and passing them on to our development team for consideration. What kind of features would you like to see as a Clan or Community Member? What about as an Officer or Clan/Community Leader?
Posted by: adm0ni06/23/2014 04:12 PM

Class balance was something I called out pretty clearly in the preview blog.

Of course, with so many competitive elements hitting the PTR, we're also reviewing each class thoroughly to ensure no matter what you play, you have a fair chance at reaching your Seasonal goals. While we won't be getting into class specific details here, we wanted to share with you a few examples of overarching adjustments we plan on experimenting with during the Public Test phase.

Bold for emphasis. Class balance changes will be a big part of 2.1 as well, we're just not prepared to share the details on that at this time. There will be patch notes accompanying the PTR, though, so you'll be able to dig into them once the PTR is available.

The Cesspools
As mentioned in the patch 2.1 preview blog, the new area of The Cesspools will show up in patch 2.1 Nephalem Rifts and Greater Rifts. This is an additional game environment, but as with the rest of the Rift design, it will be randomly populated with any group of monsters.
Post by Blizzard (Blue Tracker, Official Forum)
The Cesspools are an additional environment that will begin spawning exclusively in Nephalem Rifts (including Greater Rifts). They aren't a new zone, however, so there aren't new monsters or bosses associated specifically with them. That would also run somewhat counterintuitive to one of the qualities of Nephalem Rifts in that they are always randomized. It'd be a bit odd to introduce a new environment to Rifts and then have them produce static results.

Adding the Cesspools in was an opportunity for us to toss in a sort of "bonus" for Patch 2.1, as well as feature the awesome artwork and animations that didn't make it into the launch version of Reaper of Souls that our environment team worked on.

That said, it does not mean that Blizz is not planning other things for rifts and Greater Rifts.

We shall certainly see! Let us know what you think of this new environment, and if you'd like to see more, once you get a chance to explore them on the PTR. We certainly want to sate your Greed for new content. ;)

That capitalized mention of Greed was also in the preview blog. Will we see some other new content, perhaps based around the realm of Greed? Only the PTR will show for certain!
Recent News
Diablo III: Ultimate Evil Edition
The console Diablo III edition includes all of the Reaper of Souls content, and special social features!
PlayStation 3