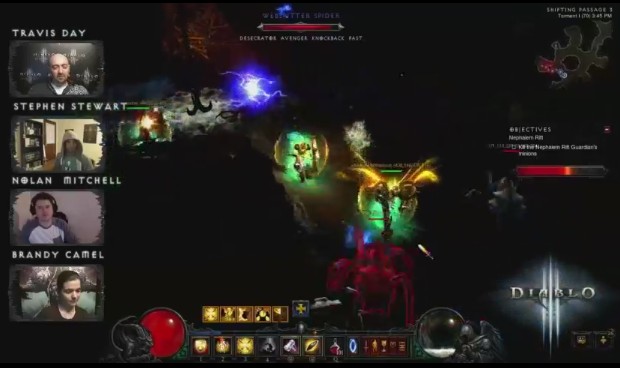 Diablo III Patch 2.1 is bringing a slew of new content, and developer Travis Day provided details about many pieces of it in the first Theorycraft Thursday playthrough livestream. There will be Legendary gems coming in patch 2.1, that will be useful in socketed rings and amulets. The patch will also bring a Hellfire Amulet that provides a random 5th passive skill, crafted up much like the current Hellfire Rings. Read on for the details of what was covered on the stream.

The livestream was run by community manager Brandy "Nevalistis" Camel, joined by Stephen "Leviathan" Stewart, Nolan "Monstrous" Mitchell, and developer Travis Day. They were all running Crusaders and went over the Crusader build that Leviathan had provided for a previous Theorycraft Thursday.

Watch the full video of the Twitch livestream, or check out the details below.

Here are the most interesting details from the livestream, grouped together by theme. Select the timestamp at the end of each topic to jump directly to that spot in the video.

Items and Crafting
Update: See the Legendary Gems guide for details on the powerful jewels added in patch 2.1!

Updated Friday, June 13 7:46PM EDT - This news was updated to more accurately reflect the discussion, filling in all the major topics along with video links. We'll cover further Theorycrafting Thursday livestreams, that are scheduled to continue every 6 weeks or so. Before that, Patch 2.1 will be arriving on the PTR, and we'll have all the details for it!

Catch all the latest Diablo III news as it happens, and useful charts and guides for the game! Follow Diablo Somepage on Twitter, Facebook, or Google+ for updates.
Recent News
Diablo III: Ultimate Evil Edition
The console Diablo III edition includes all of the Reaper of Souls content, and special social features!
PlayStation 3