An exploration of the design in the class-specific dungeons

Set Dungeons are a big new addition to Diablo III in Patch 2.4. A recent official blog provides insight into the development of this large new feature, and some of the ideas that the designers wrestled with when bringing it to life. The overview also provides hints at tweaks that may arrive for Set Dungeons in the future.

Patch 2.4.0 (and Season 5) introduces one of Diablo IIIâ€™s newest and most exciting features yet: Set Dungeons. These static realms test your skills with various class sets, each carefully tuned around specific play styles. You may have even found that theyâ€™re a little (okay, maybe a lot) more difficult than your average Rift or Bounty!

What was the design intent behind these formidable new challenges? To answer that question, weâ€™ve prepared this behind-the-scenes look at Set Dungeons, from their origin to what you can expect in-game.

What are Set Dungeons?

Senior Game Designer Alex Sulman, lead on the Set Dungeon project, explains that the gameplay experience for Set Dungeons will be way outside the norm. â€œThey give you a chance to measure your skill. A yardstick of sorts,â€ he prefaced. â€œIn a game like Diablo, thereâ€™s always something to do, so having something thatâ€™s more measurable and â€˜beatableâ€™ is different. Itâ€™s fresh.â€

Inside an early version of the Shadow's Mantle dungeon.

Why include a feature that plays so differently from the rest of the game? Some players need an end goal where they can say that theyâ€™re done. Similar to the Season Journey, Set Dungeons accomplish this by giving a definitive goal to work towards. Class sets take effort to put together, but thereâ€™s no clear â€œcelebrationâ€ of this accomplishment. Set Dungeons are the light at the end of that journey.

As an auxiliary goal, Set Dungeons also provide a sense of competition, though not formalized in the same manner as leaderboards. Since Set Dungeons are timed, thereâ€™s always an opportunity to go back and beat your time, or share your times with your friends and compare whoâ€™s truly the greatest among you.

We intentionally avoided formalizing leaderboards for Set Dungeons for a few reasons, in part because it would have significantly delayed the development of the feature. However, it also combats behavior where, when a leaderboard fills up, players may be discouraged from participating. Allowing the competition to remain more free between friends or clan mates makes the feature more approachable. It may feel insurmountable to compete with a top player, but when all you want to do is beat your buddies, it doesnâ€™t seem so impossible a task.

Every so often, a game team might need to take a step back and go off the rails â€“ take an opportunity to stretch their imaginations and see what kinds of crazy ideas they can make work. Several months ago, the Diablo III development team did just that, working on any creative passion project they wanted before pitching it to the rest of the team. For Alex, that meant fleshing out Set Dungeons.

One of the slides from Alex's original pitch deck.

The initial pitch is pretty much what you see in game todayâ€”a finish line for sets. The first set dungeon designed was Delsereâ€™s Magnum Opus, and the response from the team was huge. There was a definite desire for greater challenge and testing oneâ€™s limits. Aside from some basic logistical questions, the team was ready to get this concept in game.

There wasnâ€™t much iteration on the idea. â€œIâ€™d brewed on it for a long time,â€ Alex says, indicating the idea was well formed from the start. However, no matter how great an idea may be, there are bound to be challenges you would never anticipate.

The biggest complexity was the introduction of multiplayer. Originally, Set Dungeons were designed as an exclusively solo experience. However, the multiplayer experience is an important part of Diablo III, and it just didnâ€™t feel right to leave it out.

Playing Diablo with your friends should always be an option, no matter your goals.

When adding a new feature, our designers not only ask the question, â€œhow well does this play?â€ but â€œhow well does this play on PC versus console?â€ When we looked at Set Dungeons from a console playerâ€™s perspective, we saw a situation where, in local co-op, one of you sits on the couch flipping through your phone while the other challenges themselves in a Set Dungeon. That didnâ€™t make for a great multiplayer experience, so it was clear a resolution was needed.

â€œI didnâ€™t think it would work at first, but my teammates really helped that part come together,â€ Alex acknowledges. Everything from how the game would handle multiple players opening different Set Dungeons simultaneously to how the UI would look upon entry was tricky, but accomplished with group effort.

Of course, this brought both internal (and, later, community) concerns. Does the inclusion of multiplayer imply that Set Dungeons are designed to be conquered in this manner? Not at all. Players will conquer each dungeon on their own terms. For some, that might be piecing the puzzle together solo, reveling in a sense of fulfillment and personal achievement. For others, it might be getting by with a little help from their friends. Ultimately, thatâ€™s a choice each player should make for themselves, in the way that best suits their gameplay style.

As with most design projects, there were bound to be pitfalls. Some class sets and their objectives proved more difficult to design while others came much more naturally, and each had their reasons.

For example, the Thorns of the Invoker set was in the middle of a full rework at the time Alex was putting together each Set Dungeon outline. Senior Technical Game Designer Wyatt Cheng, who was tasked with redesigning the Invoker set, came to the rescue. He helped Alex define objectives and ensure the dungeon would capture the heart and essence of the setâ€™s new powers.

Tackling the Thorns of the Invoker dungeon head on!

On the other end of the spectrum, the Barbarian Set Dungeons came naturally. Wrath of the Wastes was considered one of the best examples, and not because itâ€™s touted as one of the more difficult. Its objectives really get at the heart of what the set is all about, which was the goal for every set. With objectives that encourage you to consider aspects like crowd management and utilizing Whirlwind to avoid taking damage as much as dealing it, it encourages a unique experience and highlights playing the game differently. That approach to objectives would become the expectation for other dungeons.

While not all the objectives came out perfectly, we want to avoid making too many changes. For example, there are a few objectives that may be too easily trivialized in multiplayer that we would like to address. We do, however, want to limit which aspects of the game we tune after release. For game elements that have a sense of achievement, we try to avoid revisions that could make players feel as though their accomplishments have been lessened.

Getting in Tune â€“ The PTR Process

During the PTR, Alex was poring through player feedback every day. â€œI was mostly looking for tuning, but I paid a lot of attention to general feedback to what people liked and didnâ€™t like as well,â€ he mentions, pleased with the overall reception. â€œThe general response was exactly what Iâ€™d hoped for. It showed that the content is compelling enough to pursue and a great challenge.â€ 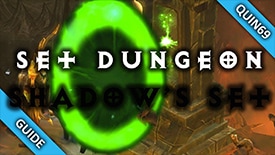 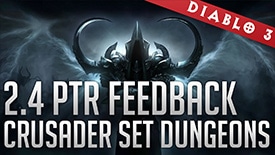 Some contributors, like Quin69 and Deadset, did thorough testing and shared their results.

Bugs were certainly another high priority. Set Dungeons were a large feature that came in hot, and the faster and larger a feature is, the more bugs itâ€™s going to have. The PTR was invaluable in this regardâ€”we canâ€™t thank you enough for your participation and incredible feedback!

We hope that Set Dungeons provide a refreshing new challenge in Diablo III. They may not be for everyone, and thatâ€™s okay. Divisive content can be good for the long-term health of any game, ensuring that there really is something for everyone. Set Dungeons are meant to be tough and deviate from the traditional slay-and-loot gameplay. Are they too tough? Perhaps for some, but youâ€™re not alone in the struggle! Even our designers feel the pressure.

â€œThe irony is that there are several that I canâ€™t master on live, so maybe Iâ€™m not the best to give advice!â€ laughs Alex. However, he does have a few tips. â€œThe number one tip is to check your corners. Donâ€™t blast through everything expecting to win. Thereâ€™s a certain playstyle that works in each, so pay close attention to them.â€ Attention to detail is important, especially if youâ€™re looking to master each set.

Finally, if youâ€™ve conquered every Set Dungeon, donâ€™t forget to congratulate yourself! Thatâ€™s no small feat. â€œIf you see someone running around with those beautiful green wings, bow down at their feet! They have mad skills . . . no matter which way they chose to tackle the challenge.â€
Recent News
Diablo III: Ultimate Evil Edition
The console Diablo III edition includes all of the Reaper of Souls content, and special social features!
PlayStation 3