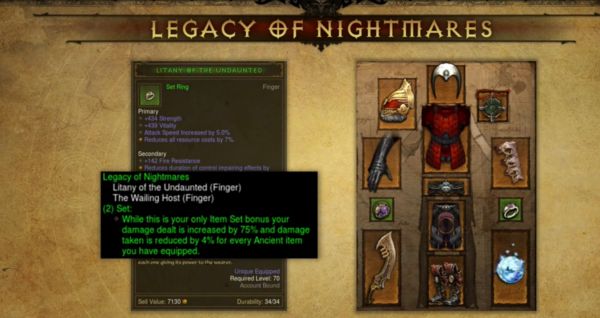 The testing for Patch 2.4 on the Public Test Realms has swept into high gear. After a handful of initial bugs getting the PTR up and going, enough gameplay has occurred for the Diablo III developers to decide on further changes for the massive patch. The Legacy of Nightmares Set bonus is being reined in, and more changes are likely for the attack speed scaling for the Whirlwind and Strafe skills. The PTR currently is not working at all for the Mac client, which will also be fixed in an upcoming build.

Legacy of Nightmares Set Overhaul
The Legacy of Nightmares dual ring Set is made up of The Wailing Host and Litany of the Undaunted. The set bonus is being overhauled in patch 2.4. The new Set bonus presented at BlizzCon 2015, as seen above, was listed as: The bonus per Ancient item was boosted to a whopping 800% per Ancient item, when patch 2.4 arrived on the PTR. This brought about much discussion of the revamped Set's power among the community, and on Twitter from the Diablo III developers.


@gahddo Legacy of Nightmares is intended to be comparable to other sets.

I want to re-iterate. Yes we will turn down LoN if it is too strong. It is put out deliberately high so it gets lots of testing.


After a few days of testing on the PTR, the developers went ahead and lowered the damage bonus. In an upcoming PTR patch, the bonus will go down to 100% per Ancient item. Wyatt Cheng took to the forums to explain the rationale behind the changes.
Post by Blizzard (Blue Tracker, Official Forum)
Hi everyone,

I wanted to pop in and let everyone know that our next PTR patch is changing the bonus damage from Legacy of Nightmares (aka the new â€œno setâ€ set) from the current 800% to 100%. Please form an orderly queue for pitchforks on the left.

One of the things that we use the Public Test Realm for is to test ideas outâ€”sometimes even crazy ideas. In our original images and communication, we had listed the bonus at a decidedly not-crazy 75%. But in the spirit of crazy ideas, we went live with 800% to give us a chance to gather data at radically different values and, eventually, find the value thatâ€™s best for the greatest number of our players. We need a lot of creative players testing the limits and the best way we could accomplish this was to turn it way overboard. Of course, drastic changes like this are inherent to what a PTR is used for, and players need to be prepared for these outcomes.

So why 100%? Well consider the way greater rifts scale. Every greater rift tier the monsters have 17% more health than the previous. If we were to lower the amount from 800% to say, 700%, this is basically equivalent to dropping by a single greater rift tier. One look at Legacy of Nightmares on PTR will show that this isn't nearly enough. Even dropping from 800%=>400% only represents a change of 4-5 Greater Rift tiers â€“ such is the nature of exponential growth (4.41 GR tiers to be exact because 1.17^4.41 = ~2). The reduction to 100% represents about 13 Greater Rift tiers in raw damage. Once you take into account further optimization and exploration that will happen this seems like the appropriate amount for LoN to come down.

We donâ€™t want Legacy of Nightmares to become required for top-tier builds. We want it to be a viable option among many. We think Legacy of Nightmares is really going to shine in allowing lots of build variety for â€œfunâ€ builds. The last few patch cycles have seen a massive number of builds emerge that are focused on activities other than pushing Greater Rifts. We've seen creative uses for In-Geom, a resurgence of builds that incorporate Sageâ€™s set, the use of Manajumaâ€™s to run around as an Angry Chicken and many others. It is becoming increasingly clear to everybody that items and builds are not just about what can clear the highest rift possible. What is good for speed runs? Whatâ€™s good for public games? Or at the end of the dayâ€”what do YOU think is FUN? The hope for Legacy of Nightmares is that it will open up space to allow players to explore lots of Torment X-viable builds that play differently than the status quo. We hope to see you invent something of your own that you know might not be the best in the world, but rocks in public games or is a style of play you can call your own.

So, I want to call on you, the brave PTR tester, to continue to experiment alongside us and find the most fun, most powerful builds and help make the Legacy of Nightmares the best it can be. Thanks for your willingness to work alongside us in this whole crazy process.
Btw, hypothetically speaking, would you consider changing other items/skills, to allow Legacy of Nightmares to become better balanced across the board?

As it currently stands each class gets a different proportion of it's power from the 6-pc sets vs. complementary legendaries. The classes performing the best with LoN right now are the ones who draw the largest proportion of power from the orange items vs green. We have talked about shifting the damage for the "set-oriented builds" which, if done properly, would allow LoN benefit more classes and builds since it will always be tuned around the high water mark. Unfortunately these types of adjustments need to take a back seat to trying to get all 24 existing sets to a good place, which already has enormous complexity as it is so I can't imagine we will realistically be able to do much of this reallocation of power among the 6-pc sets.

Whirlwind and Strafe Changes
There are a multitude of skill changes coming in patch 2.4. The Whirlwind and Strafe active skills are being updated to reduce the server strain from those skills. The changes in patch 2.4 so far: This brought up concerns from players that the skills aren't as powerful with the change. Nevalistis explained the changes on the forums; there may be further tweaks, as the developers try to improve the server load without weakening these skills.
Post by Blizzard (Blue Tracker, Official Forum)
Let's start with clearing some basics up:

We're currently discussing how we can get server performance gains without affecting the power level of Barbarians. This might mean reverting our optimizations, or it might mean providing alternative complementary options for Barbarians to compensate for the change. While we haven't made a decision yet, it's possible you'll see a couple iterations or different approaches throughout the PTR.

.@Kengax I see positives and no real negatives with this idea. We'll add Seismic Slam into the Might of the Earth 6pc bonus.


.@Conan1354 Bane of the Stricken snapshotting was a bug which we fixed in 2.4. Using Potion to snapshot ICD was definitely not intended...


No Crit Damage for Thorns
In patch 2.4 the Thorns item affix will be getting big boosts, primarily for Crusaders. Critical Hit is not active for Thorns damage. The designer intent is for Crusaders to use other item affixes, and the guaranteed Critical Hit Chance on the gloves of the Invoker's Set has been removed.
Thorns CANNOT Critical hit so CC / CHD will not benefit many of the Invoker bonuses. This is intentional so you don't automatically want those two stats on your rings/amulets. We also want Thorns Crusaders to be using a Topaz in their weapon and will make changes as needed so this happens.

@BoKjaerholt a lot of other multiplicative bonuses DO benefit thorns. Such as +% physical.


PTR Not Working on Mac Client
The PTR is currently not working for the Mac Diablo III client, even after the small client update. That will be fixed in an upcoming PTR build.
Post by Blizzard (Blue Tracker, Official Forum)
[Update]: Update: This issue has been resolved in the newest build of 34669. Thanks for your patience, everyone!

[Update]: The newest build (2.4.0.34591) is currently displaying a corruption message, and is not able to be resolved at this time. Although the error will direct you to run Scan & Repair, this will not currently resolve the issue with PTR.

Our Development team continues to work on a more stable Mac release, and we'll have new information to provide for a future patch update.

We are currently aware of an issue causing instability with the Mac Client for the above PTR Build. Our technicians are working to improve stability for our Mac in the next PTR build for 2.4.0. We'll be sure to update this thread once a stable client version has been released.

In the meantime, while you will be able to download and install the 2.4.0 PTR client, your game will hang indefinitely or crash on launch.