Another PTR patch 2.3 build is on the way, and patch 2.4 design begins 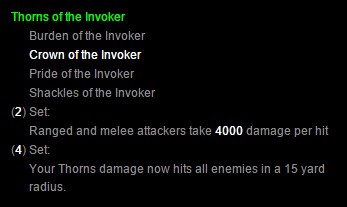 The development continues at a fast pace for Diablo III Patch 2.3 on the Public Test Realm. Another PTR build is on the way, with more changes to Crowd Control, and a lag-reducing refinement to the power on the Legendary Carnevil. The developers are already working on features for Patch 2.4, the next major patch down the road. It will bring a full overhaul of the Thorns of the Invoker set, which has never worked well in the game. Here is what we know so far about these upcoming changes.

On the patch 2.3 PTR, the community buff has been turned on and off regularly, depending on the testing needs. Major bugs found in testing brought about PTR hotfixes, and a related leaderboard wipe. There are still other bugs on the PTR to be squashed as the work continues. That is all part of the testing process, with a patch like 2.3 that brings substantial changes and additions to the game. The latest PTR work involved 4 hours of downtime, which will lead to another PTR patch.

Invoker Set Revamp in Patch 2.4
In patch 2.3 the Thorns of the Invoker set is being changed to only drop for Crusaders. That is in preparation for a major overhaul to the set that is planned for patch 2.4. The current minimal Thorns damage bonuses will be updated to a more useful set power. Developer Wyatt Cheng took to reddit to discuss the early thoughts that the development team has about revamping the set. The Invoker set will likely be expanded to a full 6-piece set, with new set bonuses to create another solid high-end gearing option for Crusaders.

We work on multiple patches in parallel and work is already underway to give Invoker's a redesign for patch 2.4. I would love to hear more about what players have in mind. Here is what we have so far.

(Please note - this is all VERY early in design it is all subject to change. Most people would be shocked to see how many times an idea changes during the development process.)

Anyways - as mentioned above, this is all in early stages so nothing's nailed down yet - which makes it the best time to invite ideas!

I'm hesitant to dedicate an entirely new 6-piece set for what we internally call "overgeared farming". In a perfect world we want to move towards a place where every class has multiple high end options and I'd want to make sure that Invoker's is made high end viable the same way Helltooth is being targeted at high end viability in the coming 2.3 patch.

That said I think some of the ideas with respect to herding up monsters for greater benefit and having a stacking aspect to Thorns are both interesting.

I agree Crusaders could use overgeared farming options . Rather than devote an entire 6-piece set maybe we can maybe take a similar approach we've used in other cases such as a single legendary with a solid movement effect (Aether Walker) or 2-piece sets (Danetta's, upcoming re-worked Manajuma's) that enable high speed when you overgear the content.

Crowd Control Changes
Crowd Control on monsters is being reduced in patch 2.3, to keep players from "locking down" creatures. The first big pass of that is already on the PTR, and it will be refined further in the next PTR patch. Mr. Cheng provided details about those changes in another reddit discussion.

It is not intended for Charm to be excluded in CC resistance. I'm not in the office today but we'll look at it this coming week. Thank you so much for bringing this to our attention!

As long as we're on the topic of CC resistance I want to share some changes coming in the next PTR patch. We've received lots of feedback that the 20% minimum penalizes short CC's too much, as well as feedback that the interaction with knockbacks and the new CC rules need additional iteration.

As a footnote, some people have suggested we separate "hard CCs" from "soft CCs" and that knockbacks and slows should not be in the same diminishing returns as stuns and charms. In a sense, we already do this. Slows are treated separately - they have no effect on the DR experienced by stuns. Regarding knockbacks we classify it as a hard CC because it is every bit as effective as a stun when it comes to disabling the monster's ability to act. Of course it has a number of differences from stuns but for the purposes of DR it's important that it share a CC category or you could combine repeated knockbacks (such as from Halcyon's Ascent) with carefully placed stuns in order to CC an enemy indefinitely.


No Diablo III Team at gamescom
Gamescom 2015 is coming up in Cologne, Germany this week. Blizzard will be making a big presence at the gaming convention, including the unveiling of the next World of Warcraft expansion. Diablo community manager Grimiku noted that the D3 team will not be part of the Blizzard group, this year. New World of Warcraft expansions have traditionally been announced at BlizzCon, but this year that's getting moved up. Perhaps that will free up more time at BlizzCon for some major Diablo III news; we will see in November!

@theangzt @cm_nevalistis @tyvalir D3 won't have a presence at gamescom, and none of us are going. WoW is gonna rock, though!


Carnevil Power Change
The Witch Doctor Voodoo Mask Carnevil is a potent Legendary, that currently makes the Witch Doctor's fetishes all shoot a Poison Dart at once. That creates a lot of spam in the game, so the Legendary power will be redesigned a bit. Developer John Yang explained how there will be fewer darts being shot by fetishes, but the overall power should remain the same.
Post by Blizzard (Blue Tracker, Official Forum)
We've made a design change to Carnevil with the goal of reducing lag caused by the build without changing the overall power level. To clarify, the lag is primarily caused by the high number of Poison Darts being fired (20+ piercing projectiles) at a high attack speed (2+ times per second) with the build. The change is as follows:

Carnevil
Instead of "Every one of your up to 23 Fetishes shoot a Poison Dart every time you do", Carnevil is now "The 5 Fetishes closest to you will shoot a powerful Poison Dart when you do."

Our internal testing showed performance improvements while maintaining the general feel and playstyle, and we hope you all will feel the same when you see the changes next PTR patch.

UI Improvements for Lengthy Items
Wyatt Cheng mentioned a nice improvement in the user interface in the game, coming in patch 2.3. Items with very long tooltips can be fully viewed, by scrolling down to see the rest of the tooltip. (That will fix the display in game; here on the web, we still have item tooltips that may run off the screen, given the display provided by battle.net.)


Season Journey Pet Easily Available
The new Season Journey feature in patch 2.3 is a guide of sorts, to help players reach fun goals while leveling up a character in a Season. Finishing chapter 4 of that journey provides a cosmetic pet. Community manager Tyvalir explained why that reward is easily obtainable, while other cosmetic bonuses come later, after the more difficult chapters.
Post by Blizzard (Blue Tracker, Official Forum)
Posted by: MissCheetah07/27/2015 09:02 AM

The first 4 chapters are designed to be accessible to everyone, with a bit of work, so everyone can get the basics. The fancy cosmetic portraits on the other hand are going to be a lot more work.
Pretty much this.

We want the cosmetic pet obtained through the Season Journey to be within reach of most players, so we placed it at the end of the Chapters part of this new feature.

If you love to test your mettle, that's where Tiers and their exclusive portrait frames come in. These provide a degree of prestige not found elsewhere, meaning other players who see your character portrait will immediately know what you've achieved.

(Also, just as a side note, we'll be detailing more of the philosophy behind the Season Journey in an upcoming blog post, so keep an eye out for it!)

The major development work on patch 2.3 is coming to a close, with minor tweaks ahead before the patch hits the live servers later in August. As with other recent Diablo III patches, it will arrive at the same date for the Xbox One and PlayStation 4 Ultimate Evil Edition, as the PC release. Before then, the final testing needs to be completed on the PTR, to get the patch as bug-free and balanced as possible by release.
Recent News
Diablo III: Ultimate Evil Edition
The console Diablo III edition includes all of the Reaper of Souls content, and special social features!
PlayStation 3