Diablo III recently entered open beta in China, and is already setting sales records there. The positive news was part of a mixed earnings report from Blizzard, for the Blizzard-Activision first quarter of 2015. World of Warcraft subscriber numbers took a nose-dive during the quarter, dropping 3 million subscribers in the quarter to end at 7.1 million. The quarter exacerbated the shift in Blizzard's revenues away from the MMORPG, to their other titles.

Diablo III has been in development for the Chinese language and cultural requirements by NetEase, as announced last July. The Chinese version of Diablo III: Reaper of Souls entered open beta on April 23, 2015, and three million Chinese players signed up for it. In one week the pre-order sales exceeded 1 million copies, a new record for Chinese sales of a PC computer game. The Chinese edition of the game is unlike the game in other regions; it is free-to-play, with certain content available for purchase in two different packages.

Here are highlights from the Activision-Blizzard Q1 2015 earnings report and conference call. 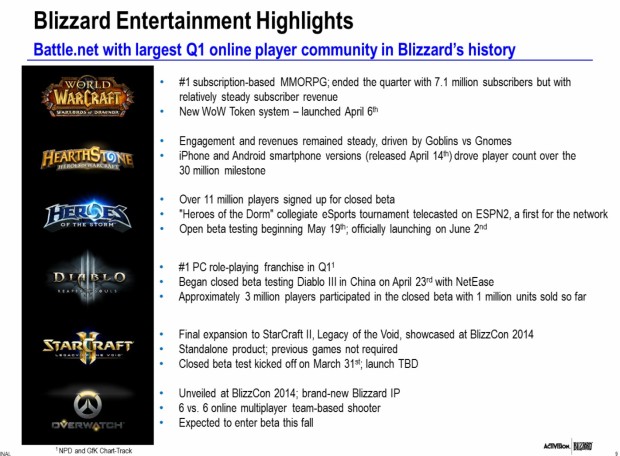 Heroes of the Storm

China is a large part of Blizzard's expected growth beyond World of Warcraft. Blizzard-Activision as a whole now has six franchises in the Chinese market: World of Warcraft, StarCraft, Hearthstone, Heroes of the Storm, Diablo, and Call of Duty Online. That is up from two at the beginning of last year. Diablo III is starting strong in the Chinese open beta, and will boost the bottom line further when it is fully released there.
Recent News
Diablo III: Ultimate Evil Edition
The console Diablo III edition includes all of the Reaper of Souls content, and special social features!
PlayStation 3