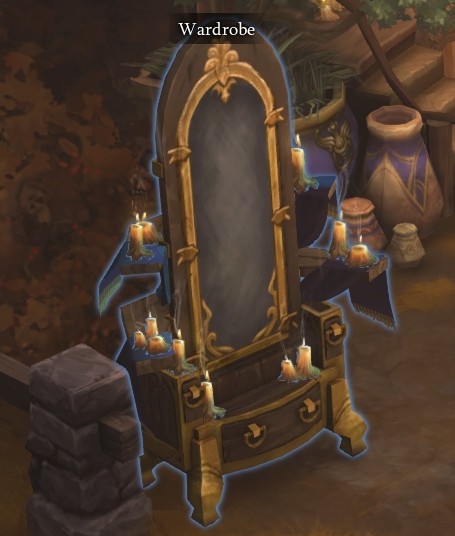 The fourth PTR build for Patch 2.2 has arrived on the Public Test Realm. Many class skills and Legendary/Set items have been adjusted. A new addition is to Set weapons and off-hand items like Natalya's Slayer, Inna's Reach, Zunimassa's String of Skulls, and Tal Rasha's Unwavering Glare - they each now have a 5th primary stat that boosts a skill. Another change on the PTR is the placement of Wardrobes to handle the new cosmetic features. Here are the latest patch 2.2.0 PTR patch notes, along with developer comments.

The Wardrobe is now found by the Mystic in each Act, as seen above. Selecting the Wardrobe provides access to the cosmetic settings added in patch 2.2, including Wings, Pets, Portrait Frames, and Pennants. These options can also be accessed in the Cosmetics menu, selected with an icon in game or [F1] function key.

This PTR update includes both buffs and nerfs to skills and items, as the developers try to find the proper game balance for them. Developer John Yang mentioned one point to keep in mind when looking at the power of the updated items.

On item/set tuning: a starting point to gauge the impact is to remember that Greater Rift monster HP is currently 17% higher per tier.


Read on for the new patch notes, and other developer thoughts.

Below you'll find the preliminary PTR patch notes for patch 2.2.0. Please note that this isn't the final version of the patch notes and that some changes may not be documented or described in full detail.

To provide feedback on patch 2.2.0, please visit the PTR Feedback forum.
To report any issues you experience while playing, please visit the the PTR Bug Report forum.
For additional information about the PTR, click here.


Roland's Legacy Set and Sweep Attack
The Crusader set Roland's Legacy is one of the sets getting revamped in patch 2.2.0, as listed above. John Yang mentioned yesterday that the developers want to boost Sweep Attack to be more useful like Shield Bash. The result of this can be seen in the latest PTR patch notes - the shield Denial now has the Legendary power Each enemy hit by your Sweep Attack increases the damage of your next Sweep Attack by 30-40%, stacking up to 5 times.

@walkintall93 Roland's with Sweep Attack improvements are coming. We definitely want Sweep Attack to be more viable like Shield Bash.


Ancient Weapons
Diablo III developer Wyatt Cheng also took to Twitter recently to discuss the power of Ancient weapons. The ultimate goal of the developers is to have Legendary weapons with a lot of interesting powers that players enjoy choosing between, instead of fixating on "stat sticks" like The Furnace.

@Raz_Matt Getting a specific legendary ancient weapon is rare, but I believe the root cause is the power gap between weapons.

Rather than make a specific ancient weapon easier to get, we'd rather improve underperforming weapons so it's not as much about "the one"

We will learn more about the developer goals for patch 2.2.0 and the PTR coming up on Monday, in the Tavern Talk livestream.
Recent News
Diablo III: Ultimate Evil Edition
The console Diablo III edition includes all of the Reaper of Souls content, and special social features!
PlayStation 3