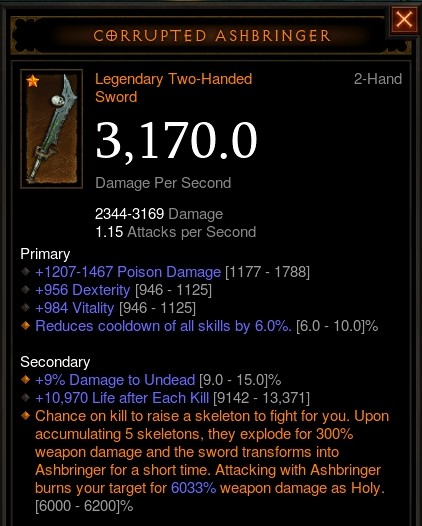 Testing of Diablo III Patch 2.2 is in high gear on the Public Test Realm. Getting on to the PTR can take a while sometimes, as so many players fill the test server to take advantage of the temporary Legendary drop buff. Hotfixes on the PTR have already arrived, along with info on future PTR patches.

Ashbringer Arrives in Diablo III
The weapon Ashbringer is coming to Diablo III with patch 2.2.0, as seen above on the PTR. This is another classic weapon from World of Warcraft. As detailed in a reddit thread, the sword changes appearance when it shifts from the Corrupted Ashbringer to the fully powered Ashbringer. The weapon's transformation was temporarily disabled by a hotfix on the PTR, due to performance issues.
Post by Blizzard (Blue Tracker, Official Forum)
Posted by: Manscaping02/25/2015 04:06 PM

Tell me about it...
http://imgur.com/gallery/4hQCfOS
Congratulations on finding this! Looks pretty cool, huh? :)

Bringing Corrupted Ashbringer (which transforms into Ashbringer) to Diablo III was a direct result of our internal Design A Legendary project. Just as our players helped create a Legendary item to be added to the game, we held an internal contest where our employees did the same, with an emphasis on bringing over an item from one of our franchises. In the end, they chose one (two, really) from World of Warcraft.

Although this item isn't currently listed in the patch notes for the PTR, we'll be tuning its power based on your feedback as usual, so try it out and let us know what you think!
Posted by: spectr302/25/2015 08:00 PM

Considering your suggestion though, I think a new addition of the Harlequin Crest Shako would be a cool as an added Legendary since it was first implemented in Diablo 1 as a crappy Unique item, and then became godly in D2, and now nowhere to be seen in D3.
Wow, I totally just geeked out for a moment thinking about my old Shako back in D2. :)

In the interest of continuing this discussion, which of the items you love from Diablo I and II that are not currently in Diablo III would you like to see make a return? And what Legendary powers would you give them that would fit the skills and mechanics that are available in the current game?

Just to get us started, here's a list of old items which were brought back in Diablo III as new or updated Legendary items (courtesy of Alex above):

Patch 2.2.0 PTR Hotfixes
Hotfixes have been rolling out on the Public Test Realm, to deal with issues on the server. This includes fixes for the new class sets that weren't dropping properly, and temporarily disables some Legendary powers that were causing performance problems.
Post by Blizzard (Blue Tracker, Official Forum)
Below you will find a list of hotfixes recently applied to the PTR that address various bugs and mechanic tweaks.

These hotfixes should not require you to download a new patch for the PTR. Some of the hotfixes below will go live the moment they are implemented while others may require a restart of the game to go into effect. Please keep in mind that some issues cannot be addressed without a client-side patch.

Last Updated - April 1. Items are denoted by the date they were applied.


Raiment of a Thousand Storms Set Bonuses
Developer Don Vu took to the forums to discuss the revamped set bonuses in the Monk set Raiment of a Thousand Storms, which will be changed further in an upcoming PTR patch. Many class set bonuses are getting updated in patch 2.2, to give more interesting gearing options for the end-game.
Post by Blizzard (Blue Tracker, Official Forum)
Hey all,

I wanted to take the time to thank you all for the feedback as well as give a little insight on our design intent for Raiment of a Thousand Storms.

When we think about the Monk, we think about a fast punching, hard hitting, quick and agile fighter. Raiment of a Thousand Storms aims to fulfill this fantasy by increasing the damage and attack speed of his Spirit Generators and turning Dashing Strike into a Spirit spender that does quite a bit of damage. The playstyle that has worked well internally is to pool up Spirit and do considerable damage with your Spirit Generators, then dump your Spirit and do a huge burst of damage by dashing back and forth until you cannot Dashing Strike anymore (or the enemies are dead). To better support this playstyle, we are going to be swapping the 4 and 6 piece set bonuses in a future PTR patch. We may also make further tweaks to the set.

I also wanted to thank everyone for pointing out that the 2 piece set bonus was additive. That was an oversight on my part and, as Xuen pointed out, has been hotfixed on the PTR as of this morning.

I look forward to hearing your feedback on the playstyle that Raiment of a Thousand Storms is supposed to bring, as well as any feedback about other clever playstyles with the set that may be more effective.

Obtaining a Ring of Royal Grandeur
It can be a bit annoying after getting a new Diablo III hero to level 70, to go through the process of obtaining a solid Ring of Royal Grandeur. Going through Bounties in Act I over and over is tedious, and the developers are looking at other possibilities for obtaining that ring. The goal is to make it so players can experience other types of gameplay, and not be stuck doing the same content.
Post by Blizzard (Blue Tracker, Official Forum)
Posted by: Wilson02/24/2015 01:50 AM

You do realize there are dozens of threads on how sick people are of just farming act 1 bounties over and over again for RoRG.
That’s a fair point.

Wyatt mentioned in our Tavern Talk livestream that playing Adventure Mode is fun when you're just beginning, but that players can get burnt out quickly if they spend all of their time just trying to farm the Ring of Royal Grandeur.

With that said, we’re currently considering ways we could alleviate the focus on just doing Bounties in one act over and over again. To get the conversation rolling, here are a few of the ways we could achieve this:


These are only three ideas, of course, so you can imagine there are lots of ways we could go about achieving our goal of encouraging more diversity when doing Bounties. With that said, how would you change Adventure Mode to incentivize doing a variety of Bounties across all five acts of the game?

Focused Feedback for PTR Patch 2.2.0
Since there is so much going on with the new patch on the PTR, the community team has a thread devoted to feedback focused on specific topics. If you are testing out these items on the PTR, be sure to drop by and let them know what you think.
Post by Blizzard (Blue Tracker, Official Forum)
Last Updated: March 10

This upcoming patch features numerous quality of life and item revisions for Diablo III: Reaper of Souls. For more information on the full scope of Patch 2.2.0, please check out our latest PTR patch notes here and our Patch Preview here.

We want to make the most of your testing efforts, so while we welcome any and all feedback, we are currently looking for focused discussions on the following topics:


To help guide your feedback, we ask that you use the following format:


With that said, thank you to all our PTR participants. Your feedback is appreciated and continues to be integral to our design and iteration process. Happy testing!

Please Note: In order to facilitate focused feedback, posts in this thread that are not relevant to the topics listed above will be deleted. Please create a new thread for your concerns if they are outside the above topics. Thank you!

There have been frame rate issues on the PTR that are being looked into, along with other bugs like the wrong quality of gems dropping from new Treasure Goblins. There will no doubt be many more PTR patches as the development continues for patch 2.2.0.
Recent News
Diablo III: Ultimate Evil Edition
The console Diablo III edition includes all of the Reaper of Souls content, and special social features!
PlayStation 3