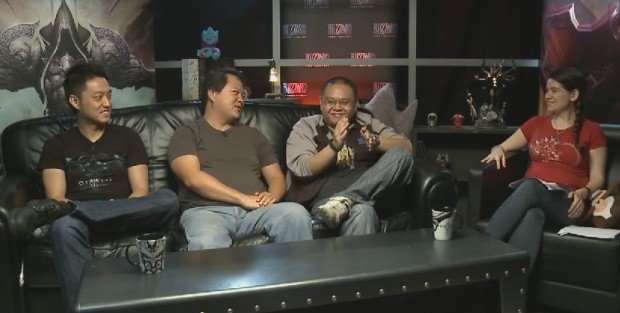 The first Diablo III Tavern Talk ran today, providing information about the upcoming Diablo III patch 2.1 and future patches. Community representative Brandy "Nevalistis" Camel chatted with Diablo III developers Wyatt Cheng, John Yang, and Don Vu for over an hour about the future of the game. They touched on the new features in patch 2.1 such as Seasons, Legendary Gems, and Greater Rifts. There was also discussion about changes and additions that might come in the patches beyond 2.1. Here are the highlights of all the important topics discussed, along with the full video.

Keep in mind that Diablo III Patch 2.1 is already feature complete. Any ideas for the future that are mentioned by the developers will be part of a later patch. After patch 2.1.0 lands, small tweaks like class balance issues or rewards from the Greater Rifts may be adjusted with a minor update like patch 2.1.2. Major additions such as new items are generally part of major content patches, so perhaps will be added in patch 2.2.

At the end was an announcement about a temporary Gold Find bonus this weekend for all Diablo III PC characters. In preparation for the release of patch 2.1.0, a 50% multiplicative bonus in Gold Find will run until maintenance on Tuesday.

Here is the full 90 minutes video of the developers chatting, followed by highlights of their discussion.


Item Properties
Q: What is changing with Dexterity and Dodge?
Q: Any changes to Block on shields?
Q: What about Critical Hit Damage (CHD) and Critical Hit Change (CHC) being so overwhelmingly powerful?