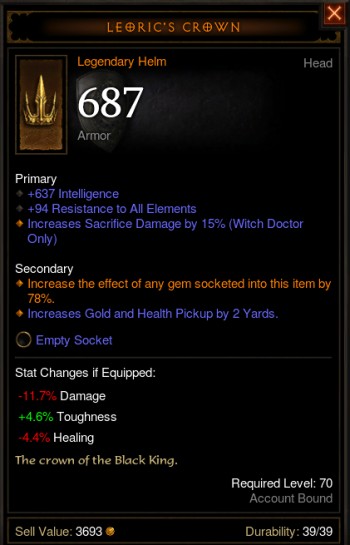 Along with Legendary items improvements, the sweeping buffs to 2-handed weapons will provide new weapon options for many classes. As with everything on the PTR, all of these changes are still in flux and may be changed further as the development process continues.

Leoric's Crown
The helm Leoric's Crown is currently not a very interesting Legendary item. That will change in patch 2.1, as the helm is one of the revamped Legendary items. New drops of the crown in patch 2.1 will have the Legendary power: As listed on reddit, this can be seen in the screenshot above of a new drop of the crown on the PTR. There are certain specs that will find this very useful, when trying to stack a lot of Cooldown Reduction (CDR). With the helm, a character can gain up to 25% Cooldown Reduction when using a Flawless Royal Diamond.

Remorseless - One-Hand Barbarian Mighty Weapon
One of the new Seasonal Legendary items is a Barbarian 1-handed Mighty Weapon named Remorseless. Details were provided on reddit about the weapon, and how the summoned Ancients work. The weapon provides for a large number of followers for a Barbarian, when combined with the Ancients from Call of the Ancients.

Krelm's Buff Bracers
A new Seasonal Legendary that can be used by any class are the Krelm's Buff Bracers, part of a new 2-piece set. The bracers provide the Legendary power:
As confirmed by Nevalistis, the bracers do not help against the Jailer or Frozen monster abilities, since those are not considered Knockbacks or Stuns.
Post by Blizzard (Blue Tracker, Official Forum)
Posted by: Neidbau07/18/2014 05:18 PM

Probably not, as Jailer and Frozen are not stuns, they are immobilize and freeze effects.

Neidbau's got it on this one. Krelm's Buff Bracers grant immunity to Stuns and Knockbacks, neither of which apply to the Jailer or Frozen effects.

Seasonal Legendaries for Season 1
As listed in the PTR 2.1 patch notes, this is the current list of new Legendary items for the first Diablo III season. Once patch 2.1 goes live, the first season will start. During the season, these items will only drop for Seasonal characters. After the season is over, all items on Seasonal characters will be transferred over to the standard characters, including any of these Seasonal Legendary items that have been obtained. At that point, these Seasonal items will drop for all characters.

These items just started dropping in the latest PTR patch. They are still being heavily developed, and many of them have not even been given names.
New Seasonal Legendaries

These items will continue to be polished in upcoming PTR patches, before finally going live once patch 2.1.0 is completed.
Recent News
Diablo III: Ultimate Evil Edition
The console Diablo III edition includes all of the Reaper of Souls content, and special social features!
PlayStation 3