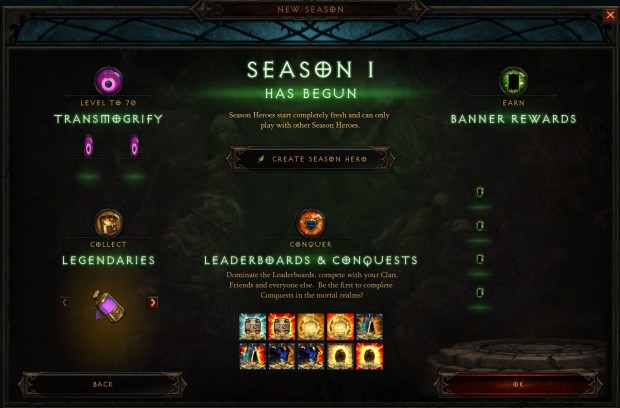 The first test of Seasons in Diablo III is available on the Public Test Realm. Players can start a Seasonal hero, that is entirely new and not connected to the other characters on the account. This is the very first test of Seasons, from the PTR build that went up this past Thursday, and brought many other changes! We're still waiting for the official patch notes to be updated with the changes in the last build, but here's a look at some of the new features.

Testing of Seasons on the PTR
As seen in the image above, even the introductory info for Seasons is still a work in progress. The functionality is not complete, but players can start testing out this "clean slate" approach to the game. As noted in a post by Lylirra, the Seasonal Legendary items are also not fully implemented, although a handful of them have shown up.
Post by Blizzard (Blue Tracker, Official Forum)
Our first Seasons test begins today! To create a Seasonal hero, simply check the "Seasonal Hero" box located below the class selection list.

Please note that over the course of the patch 2.1.0 PTR, we may periodically "end" a Season to test the rollover process and ensure that Seasonal character data migrates correctly. To get the most out of this PTR, we will likely start and end a Season several times before our public test phase concludes.

If you have any feedback to share regarding Seasons (including, but not limited to Conquests, Leaderboards, Seasonal Legendary items, character creation, and data roll over), be sure to post in this forum. Any and all feedback is welcome. :)

Thanks for your support and participation, and good luck with those Conquests!
For feedback on Seasonal Legendary items, please post here: http://us.battle.net/d3/en/forum/topic/13241704325

Two-Handed Weapon Changes
As reported previously, the patch also brought a big buff in the damage to 2-handed weapons. Developer John Yang jumped back in to reply to further comments, about the effort to make those weapons appealing to more classes than just Crusaders.
Post by Blizzard (Blue Tracker, Official Forum)
Posted by: jkcheng12207/17/2014 02:51 PM

The only thing left unanswered is the extra socket, which is such a large DPS boost, does warrent concern.
Posted by: AriÃ¢el07/18/2014 03:36 PM

Increasing the stat rolls on 2-Handed weapons so they are equal to two stat rolls of a 1-Handed weapon is a common suggestion and one weâ€™ve definitely considered. Unfortunately, this solution would have the undesirable consequence of enabling only one class â€“ Crusaders â€“ to have the highest possible amount of certain stats from gear (e.g. Cooldown Reduction) when using both a 2-Hander and a Shield.

Adding an extra socket to a 2-Hander effectively translates into more DPS. Yes, we could do that, but as some players have begun to point out, Critical Hit Damage is a problematic stat for us. Because it multiplies with Critical Hit Chance, it causes both of those stats to feel overly mandatory. We would much rather further increase 2-Hander base damage than give out more Critical Hit Damage.

To give an extreme example for this topic, if we increased the base damage of 2-Handers by 10x, 2-Handers would definitely not need an extra socket or higher stat rolls in order to be competitive. That example tells us that we can continue making the distinction that 2-Handers hit harder and make more efficient use of resources while 1-Handers generate more procs and have more of certain stats, and not have to settle for a solution that unfairly gives a higher cap of certain stats to Crusaders or exacerbates the issue with Critical Hit Damage.

The current 2-Hander buff is a safe first approach. We donâ€™t want to swing the pendulum in the other direction and make 2-Handers the only option, so we are moving carefully. Thanks for all of your feedback, suggestions, and number-crunching â€“ keep it up. 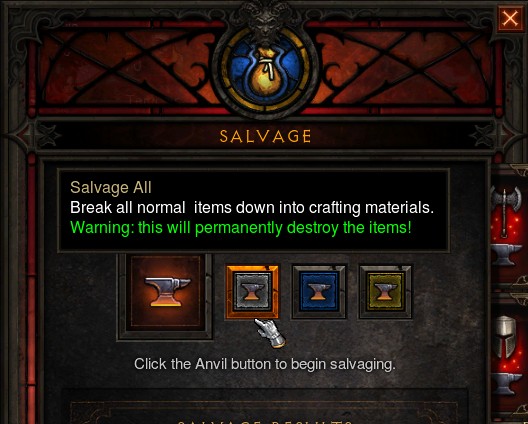 There are new options at the Blacksmith, to salvage all White, Blue, or Yellow items in a character's inventory. This screenshot shows the Salvage White Items option being selected. The feature is only available once the Blacksmith artisan has been upgraded to level 12.
Post by Blizzard (Blue Tracker, Official Forum)
The ability to Salvage All is a perk that's unlocked once your Blacksmith reaches level 12. So while this feature is available in Seasons, it may take you some time to reacquire it.

Energy Twister Changes
One change in this PTR patch was to the fiendishly difficult Wizard active skill Energy Twister. Developer Don Vu stopped by the forums to talk about a mechanical change made to the skill in the patch.
Post by Blizzard (Blue Tracker, Official Forum)
Posted by: maSu07/17/2014 04:00 PM

Energy Twister actually received a significant change (in addition to the AP cost reduction on Mistral Breeze) in the latest PTR patch that Iâ€™d like some feedback from you guys on. The change didnâ€™t show up in datamining, so Iâ€™ll leave this tidbit of information here:

The goal here is to retain Energy Twisterâ€™s unpredictability, while still allowing you to hit the target youâ€™re aiming for.

We'll get the PTR patch notes updated shortly. In the meantime, give ET a whirl and let me know what you think! Thanks!

Patch 2.1.0 PTR Known Issues
There is a lot of work still to be done on patch 2.1.0, and the current build on the PTR has a number of bugs. Here is the often-updated list of major issues that are being tracked by the Diablo III Quality Assurance team. These will be cleared up over time, in future PTR patches.
Post by Blizzard (Blue Tracker, Official Forum)
Hello everyone, and welcome to the Patch 2.3.0 Public Test Realm! Below you will find the Known Issues list for our current 2.3.0 build - 33174. Please do not report bugs that you see on this list, as we already know about them, and please help out other players reporting bugs by referring them to this list.

As a reminder, this list will not list every bug that is active on the 2.3.0 PTR. What it is listed here are a select few issues -- chosen due to visibility and impact -- that are active and confirmed as bugs by Quality Assurance with verifiable steps and (in most cases) an expected fix. Just because a bug is not on this list does not mean we don't know about it! In addition, potential exploits and the like will never be listed here.