Other current issues include a broken power on Carnevil 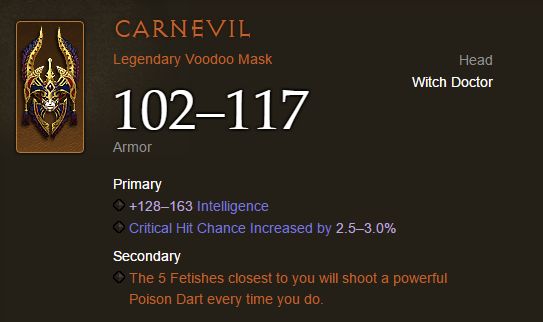 Diablo III has been busy since Patch 2.4 landed last week, as players jump back into the game and make Season 5 heroes. One of the issues since then has been that so many players online have overloaded the European Diablo III servers, with regular lengthy queues in that region. That is being taken care of, along with other issues. An upcoming hotfix will take care of the Carnevil Legendary Voodoo Mask not working.

Extra Hardware for EU Servers
The queues on the European Diablo III servers have been popping up regularly since patch 2.4 arrived. Extra server hardware has been put online to help get rid of those pesky queues.
Post by Blizzard (Blue Tracker, Official Forum)
Hi everyone,

As you may know, some players have been experiencing brief queues when creating new games in Europe over the past few days. These queues can be necessary during times of high demand to ensure that all players have a smooth gaming experience, but they are obviously no fun.

We wanted to let you know that we’ve been working to reduce the queues by making additional resources available for players in Europe, and we’re continuing to monitor the situation and add more hardware as needed.

Thank you all for your patience, and we hope you enjoy Patch 2.4.0 and Season 5.

Hotfix in Progress for Carnevil
The power of the Witch Doctor Voodoo Mask Carnevil is not currently working. A hotfix is being tested that will fix the issue.
Post by Blizzard (Blue Tracker, Official Forum)
Hey all,

I really appreciate your patience with us while we investigate this issue. Wanted to pop in with a quick update.

We do currently have a fix in testing, and our QA team is putting it through the ringer to make sure it's good to go (and of course, doesn't negatively impact anything else). I don't have an ETA for it's arrival, but I want to confirm it is actively being worked on and we're trying to get this hotfix to you as soon as we can.

This issue affects only the Achievement Toast itself. The achievement will still be earned and can be viewed elsewhere in the game.

We are currently investigating a fix and hope to have it ready soon.

Console Performance Issues in 2.4
The Quality Assurance team is asking for more feedback, from players on a PS4 or Xbox One who are seeing frame lag and game stutters since patch 2.4 arrived. After the earlier feedback requests, QA would like to see videos of the problem, which can be posted in the feedback thread.
Post by Blizzard (Blue Tracker, Official Forum)
We're continuing to investigate these issues and want to thank everyone who has contributed reports so far. We've been able to check a number of potential causes off of the list, but getting this to happen reliably on our end has proven difficult.

We'd like to make another request from players who are experiencing frame rate issues. Videos posted by players in this thread are giving us a much clearer picture of the different ways players are being affected, so we'd like to get a larger set of videos to analyze.

So, if you're affected and want to help us keep these investigations moving forward, please upload a video of the issues using the platform-specific share features for your console. Then, please post a link to that video in this thread.

Please also make note what type of game you're playing (Adventure Mode, Greater Rift, etc.), if you're in an offline or multiplayer game, and what difficulty your game is set to. If you've identified any other items, abilities, or circumstances that make the issues especially evident, please make note of those as well.

Thank you again for helping us gather information.

Patch 2.4.0 Known Issues List
The main issues list has been updated with more areas of concern. One newly listed issue is that the Custom Engineering passive on a Demon Hunter Hellfire Amulet will stop working after a few minutes of play.
Post by Blizzard (Blue Tracker, Official Forum)
Hello everyone, and welcome to Patch 2.4.1! Below you will find the Known Issues list for our 2.4.1 patch. Please do not report bugs that you see on this list, as we already know about them, and help out other players reporting bugs by referring them to this list.

As a reminder, this list will not list every bug that is active in the 2.4.1 patch. What it is listed here are a select few issues -- chosen due to visibility and impact -- that are active and confirmed as bugs by Quality Assurance with verifiable steps and (in most cases) an expected fix. Just because a bug is not on this list does not mean we don't know about it! In addition, potential exploits and the like will never be listed here.