Big changes for group composition and playstyles in the upcoming patch 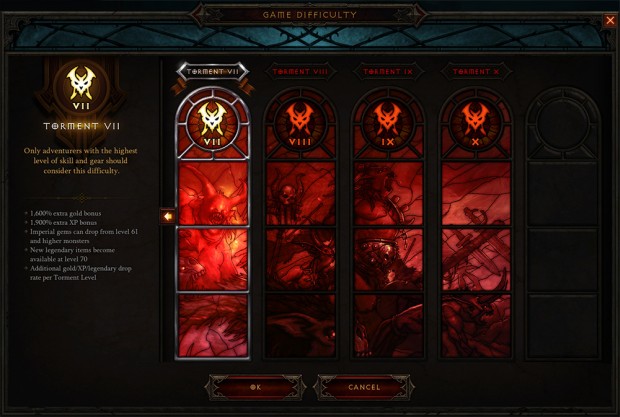 Diablo III patch 2.3.0 is burning up the Public Test Realm, as the upcoming patch starts the testing process. One major change in the patch involves how experience bonuses are handled for players. All experience gains and bonuses will be averaged across the players in a group, instead of divvied up individually. That is one of the changes that will dramatically shift group composition and gearing in the new patch.

Experience Gains & Bonuses Averaged
The big change regarding experience bonuses was edited into the patch 2.3.0 patch notes, and mentioned by developer John Yang:

Also in Patch 2.3: Experience gains and bonuses are now averaged across all players in the group (this should now be in the PTR patch notes)
This means that the experience bonuses from items like Leoric's Signet will be averaged across everyone in the party, instead of individually applied. This will prevent the groups that have become popular, with a few heroes doing all the damage, essentially carrying the other heroes who stack a lot of +Bonus Experience % equipment.

Between that change and the reduction in the ability to crowd control monsters in patch 2.3, the overall gameplay and composition of groups at the high end will shift in the new patch. There won't be the sort of popular group setups that includes a zDPS (Zero DPS) character, who often stacks that +experience gear and provides crowd control on monsters. There will likely be a change towards all players providing at least some amount of damage, along with utility buffs to help the entire group perform as well as possible.

As seen above, there are also new Torment levels coming in patch 2.3, as the difficulty system expansion to add Torment VII (7) up to Torment X (10). In the standard Adventure Mode outside of Rifts, this will impact public groups. Fewer players will be able to adequately handle Torment X compared to Torment VI. There will not be many highly geared players in games of the lower Torment difficulty levels, since they will all be hanging out with other extremely well geared players at Torment X.

Skill of Nilfur Issues
The new Kunai's Cube artisan in patch 2.3 provides multiple recipes, that each changes items in some way. The Skill of Nilfur recipe allows one Set item to be changed into another item of that same Set. Right now there is a bug that makes the new Set item tradeable between players. The recipe also makes it easy to keep rerolling items from 2-piece sets back and forth, such the Focus and Restraint rings, until the player gets a powerful Ancient version. Developer Travis Day stated that both of those issues will be dealt with, as the Kunai's Cube recipes are tweaked during the PTR process.
We are going to be changing this recipe. The intent of the convert set item recipe is to help players who are trying to finish a set and getting redundant pieces. The intent is not to get 2 focus and reroll 1 repeatedly until it's perfect. As such changes will be coming before the feature launches to directly address this.

Season 4 Features and Items Not on PTR
The new features for Seasons, and the Season 4 items, are not yet available for testing on the PTR. That will all be available to try out, further into the testing process.
Post by Blizzard (Blue Tracker, Official Forum)
As the PTR is currently still running Season 3, the following Patch 2.3.0 Season 4 exclusive items will not be dropping until we roll over to Season 4.


We apologize for any confusion this may have caused and we'll keep you updated as the PTR Season rollover draws nearer. Thanks as always for your diligent reports and testing!

Known Issues in PTR Patch 2.3.0
Here is the current list of major issues already known about by the Diablo III Quality Assurance team. These will be dealt with, mainly in upcoming PTR patches.
Post by Blizzard (Blue Tracker, Official Forum)
Hello everyone, and welcome to the Patch 2.3.0 Public Test Realm! Below you will find the Known Issues list for our current 2.3.0 build - 33174. Please do not report bugs that you see on this list, as we already know about them, and please help out other players reporting bugs by referring them to this list.

As a reminder, this list will not list every bug that is active on the 2.3.0 PTR. What it is listed here are a select few issues -- chosen due to visibility and impact -- that are active and confirmed as bugs by Quality Assurance with verifiable steps and (in most cases) an expected fix. Just because a bug is not on this list does not mean we don't know about it! In addition, potential exploits and the like will never be listed here.

Mac Access to PTR
As seen above, right now the Mac Diablo III clients cannot properly access the PTR. The official posts note that an updated PTR build, which is likely arriving in the next few days, will take care of the issue. There is a player-created workaround for the issue, but that could potentially cause issues down the road.
Post by Blizzard (Blue Tracker, Official Forum)
Greetings Heroes,

As mentioned in our Known Issues list for the 2.3.0 PTR release, the Mac version of our current PTR release (Build 32496) is not currently functioning properly and will not launch. We are aware of this issue, have it working internally and will have the build updated on the PTR soon. We appreciate your patience while we are working towards that goal.

Thanks again, and we hope to see you all on the 2.3.0 Public Test Realm soon!
Post by Blizzard (Blue Tracker, Official Forum)
After discussing with our engineers, it looks like this is not a fix that can be pushed via a hotfix. As there are multiple other code changes ongoing, this fix can't be picked up until those tasks are completed and a new build is generated for public release. Currently we hope to have a new build out early next week.

In the meantime, please note that player-supported fixes may not be supported by Blizzard if there are code changes. If your build should encounter an issue once the next build is released, try uninstalling and reinstalling the build.

I know this isn't fantastic news (in fact it can be quite frustrating), but I wanted to try and set some clear expectations based on the information I've been able to collect from our Development teams. This was on an active in-progress PTR build, so the good news is that we'll have this fixed well in advance of the live build release.

As the next PTR patches arrive for patch 2.3.0, the early noted oddities and bugs will be ironed out, and testing will arrive for the next Season. We are still early in the test process for patch 2.3, and the patch will solidify over the next couple of weeks of testing.
Recent News
Diablo III: Ultimate Evil Edition
The console Diablo III edition includes all of the Reaper of Souls content, and special social features!
PlayStation 3