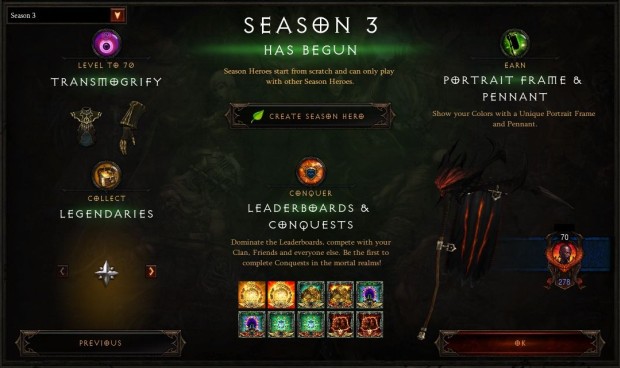 Season 3 will arrive on Friday, April 10, a few days after Patch 2.2 goes live on the Diablo III servers. Patch 2.2.0 will bring many new Legendary and Set items, and a handful of them are exclusive to Season 3. Here's a look at the items designed specifically for Season 3, and the bonus pennant and portrait frames that can be earned by Season 3 heroes.

Season 3 Class-Specific Equipment
The new class-specific exclusive items for Season 3 include revamps of two older Legendary items that did not have a special power. The rest of the new class Season 3 items are entirely new. 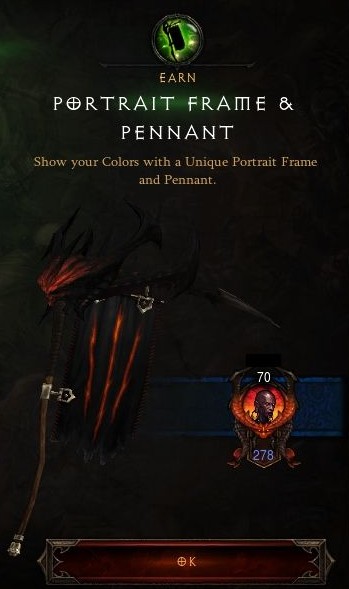 Season 3 will also include exclusive pennants and character portrait frames. They are obtained by gaining Season 3 Achievement Points: the pennant is provided for reaching 100 Seasonal Achievement Points, while the portrait frame is rewarded for reaching 400. The Seasonal achievements have all been custom redesigned for Season 3, so players will find new goals to reach for with their Season 3 hero.

The character portraits are a new addition in patch 2.2.0 for all players. All the portrait frames from character levels and Paragon levels can be chosen from, along with new frames, such as reward from Season 3 Achievement Points.

The Season 3 pennant is another cosmetic reward that makes a hero more noticeable. This is another fun bonus for Diablo III players who participate in the next Season.