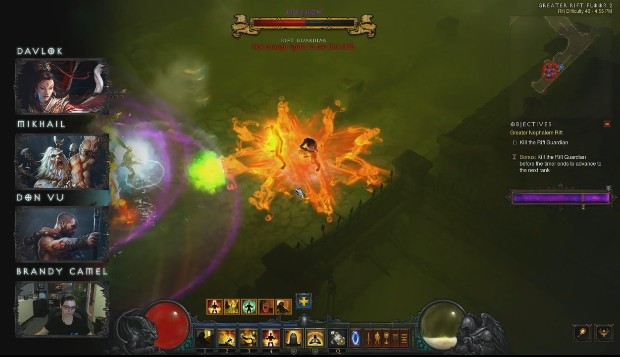 There were many Monk deaths and plenty of interesting Diablo III discussion in the latest Play Your Way Twitch livestream, on Thursday night. The stream featured community manager Brandy "Nevalistis" Camel talking with game designer Don Vu, and players Meathead Mikhail and Davlok. Topics discussed include current and future class Sets, and the upcoming revamp to Adventure Mode. Read on for thoughts from Don Vu, or watch the VOD for all the fun!

Keep in mind that many of the changes currently being worked on "for a future patch" will be coming in patch 2.3, the next major patch that will bring Season 4. Other updates won't arrive until later patches, depending on the vagaries of the game development process. You can watch the VOD below or on Twitch, for the full experience. It includes plenty of fun banter, along with many deaths of Nevalistis' Monk. Below is a rough transcript of the statements made by Don Vu about many topics of interest in Diablo III.