Another item will be added to each original set, in a PTR patch next week 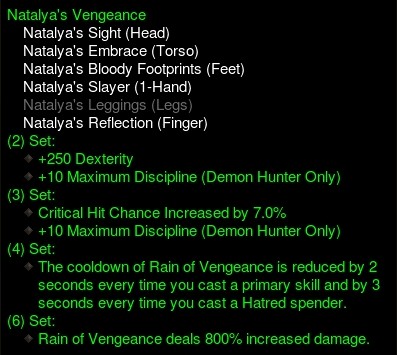 The oldest class Sets in Diablo III are getting more upgrades in Patch 2.2, with a 7th piece being added to each set. That change will arrive in the next PTR build, which is scheduled to land next week. It will also bring more updates to the brand new Barbarian set, and a big change for the immunity skills in Diablo III. Here are all the latest details.

7th Piece for Vanilla Sets
The five original class sets are getting a lot of attention in patch 2.2.0. Those sets are: The set bonuses were reworked and the sets expanded in the first patch 2.2.0 PTR build, to give 6 pieces to choose from. Many of those sets include a weapon or jewelry item, making it difficult to get the 6-piece set bonus that is a new potential end-game goal with the patch. A new 7th item will be added to each of those sets in the next PTR patch, to give more flexibility when going for all the set bonuses on these sets in patch 2.2.0. Diablo III game developer John Yang announced the new items on Twitter.

The 5 vanilla class sets will get a 7th piece in the next PTR patch. Should help w/ gearing/power issues since the sets have weapon/jewelry.


Wrath of the Wastes Barbarian Set
An entirely new Barbarian set is being added in patch 2.2.0, the Wrath of the Wastes set built around using Whirlwind. The set bonuses have changed multiple times since it was first introduced back at BlizzCon 2014, and most recently were based on swapping between Whirlwind and Rend. The set will change again in the upcoming PTR patch, and now will be focused more specifically on using Whirlwind.

@itsNobbie WW Set has changed and should feel more like WW. WW won't require Rend on target for dmg. You'll see it next PTR patch in a week.


Immunity Skills in Patch 2.2
Skills that provide damage immunity are getting changed in patch 2.2. It has been a constant concern that stacking Cooldown Reduction and certain items could allow for permanent immunity. Skills such as Smoke Screen and Serenity have been changed back and forth multiple times since the release of Diablo III to prevent being able to play with permanent immunity, going all the way back to the first hotfixes for the game!

The topic came up again in relation to the Legendary item Obsidian Ring of the Zodiac being updated in patch 2.2. The ring's new Legendary power is:
Reduces the remaining cooldown of one of your skills by 1 second each time you spend resource.
To deal with the issue across the board, in patch 2.2.0 four skills will be changed so that their cooldown starts after the skill buff ends: Smoke Screen, Serenity, Spirit Walk, and the rune Laws of Hope - Stop Time.
Post by Blizzard (Blue Tracker, Official Forum)
Posted by: Heisenberg02/26/2015 09:21 AM

The concept of permanent immunity has actually been on our radar since we introduced Cooldown Reduction in Reaper of Souls. Since then, we’ve seen many players who have been able to skirt the edges of permanent immunity using this affix. Frankly, we think that’s awesome, since we love it that players can customize their characters in different ways.

While it’s our goal for CDR to be a desirable affix, and while we’re okay with players greatly reducing the cooldown of their immunity skills, we also want to avoid a scenario where permanent immunity is possible. For instance, in patch 2.1.2, we put a cooldown on Smoke Screen to mitigate permanent immunity builds for the Demon Hunter so that you couldn’t chain this skill back-to-back.

Starting in the next PTR patch, we’ll be applying this philosophy to the following immunity skills.

Previously, we may have decided against adding an item power to the game that might lead to permanent invulnerability. However, with these new changes, we’ll have much more freedom in designing new and powerful items, since there will be a stop gap to ensure that permanent invincibility is no longer a concern.

We wanted to let you all know about the above changes in advance, so that you’ll be prepared for them in the next PTR patch. I'll be eager to hear everyone's thoughts once these changes actually go into effect.

Jade Harvester Set Updated for Spirit Walk
The change listed above for Spirit Walk will impact most Witch Doctors; as seen in the Popular Witch Doctor Skills, it is easily their most used skill. The Witch Doctor set Raiment of the Jade Harvester will see set set bonus updates, along with another Legendary item, to help mitigate the skill cooldown change. John Yang also mentioned this on Twitter, along with a discussion of a new cat Mojo graphic. There won't be a Mojo with that graphic in patch 2.2, but hopefully it will arrive in another patch down the road.

Jade Harvester will get new 2pc/4pc bonuses and a new complementary item to make up for the Immunity changes that affect Spirit Walk.

@thheller What you're really asking for is Jade to perform/play better against 3 or less targets. I hear you. Stay tuned.


Patch 2.2.0 for Consoles
As with other recent patches, the next Diablo III patch will be released simultaneously for PC/Mac, and the PlayStation 4 and Xbox One consoles.
Post by Blizzard (Blue Tracker, Official Forum)
For clarity, patch 2.2.0 is not live at this time, and currently can only be explored on the PTR for PC. So far, we haven’t posted any information about when we expect to release 2.2.0; however, as a general rule, we don't typically announce patch dates ahead of time since they’re subject to change.

That said, our current intention is to release patch 2.2.0 for Xbox One and PlayStation 4 at the same time that it's released for PC. Of course, this plan might change as we get closer to actually releasing the patch. We'll be sure to post patch notes on the console forums when that happens, though, so you’ll have all of the juicy details on what the update entails.
Recent News
Diablo III: Ultimate Evil Edition
The console Diablo III edition includes all of the Reaper of Souls content, and special social features!
PlayStation 3