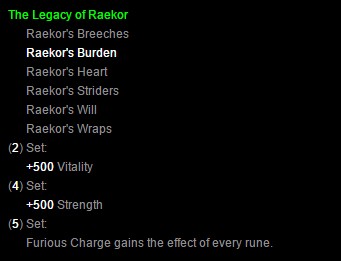 Diablo III Patch 2.1.2 continues in development, and will bring even more changes to class sets, beyond the previously announced updates to Demon Hunter and Monk sets. The Barbarian Legacy of Raekor set bonuses are being changed in the patch, along with a Furious Charge - icon rune that was bringing about unhelpful gameplay. The latest Blizzard Blues detail the set bonus changes for Barbarians, and more tweaks to the Monk Sunwuko set.

Raekor Set Overhaul
The currently live set bonuses for the Barbarian Raekor's set can be seen above, on items like Raekorâ€™s Breeches. Among the softcore Most Popular Barbarian Armor, the Raekor set is currently the most-used Barbarian class set. The problem comes when Barbarians are using the set in a party, specifically because of the rune Furious Charge - Dreadnought. A Barbarian using the set will pull monsters to him and often away from the group, causing problems for other players in the group. That particular rune will be revamped in the next Public Test Realm patch to deal with the issue, and the Raekor's set bonuses will be overhauled.
Post by Blizzard (Blue Tracker, Official Forum)
Posted by: Starbird11/27/2014 08:17 PM

Sets should provide synergy within a party, not troll the party.

This is actually pretty offensive to us as well, but we don't think the problem is with the concept of Raekor's. When you observe the gameplay as a teammate, it kind of reminds you of that kid on the playground who would take the ball and run with it rather than passing it around and letting the other kids play with him.

That's not a great feeling, especially for the rest of the party. It doesn't live up to the spirit of multiplayer or create good teamwork opportunities. We're looking to fix this by redesigning the Dreadnought rune and the Raekor's set. Here's the current plan:

The gameplay of zipping back and forth across the screen and dealing huge amounts of damage is a lot of fun, and we want to preserve that. What we want to combat is how this gameplay was downright incompatible with multiplayer. Rather than charging forever forward, it should feel good to charge through existing groups before moving on to the next pack, and it'll be even better if your buddies line 'em up for you to knock back down. This change should be in the next PTR patch, which we're hoping to get to you shortly. We look forward to seeing your feedback!

Sunwuko Set Change
Another class set already being changed in patch 2.1.2 is the Sunwuko for Monks. That will be tweaked further in the next PTR patch, with a boost to the damage done by a Monk once the set decoys explode.
Post by Blizzard (Blue Tracker, Official Forum)
We've got another update coming regarding the Sunwuko set. A slight change will be coming to the 4-piece bonus in the next PTR patch:


This should help make this damage boost feel a little less clunky and more reliable to use in practice. As always, thank you so much for your feedback and we look forward to hearing your thoughts as we move on to the next phase of PTR testing!

Why Set Changes Are Retroactive
The changes to these set bonuses (and the major revamp of the Demon Hunter Marauder's set bonuses) are all retroactive; they will change for each of the set items that are already in the game. Once patch 2.1.2 goes live, players will log on and automatically have updated set items. That is not true for most other changes to Legendary items; the addition of new Legendary powers will only be on entirely new versions that drop after patch 2.1.2 is live. Nevalistis explained the thought process that goes into those decisions.
Post by Blizzard (Blue Tracker, Official Forum)
We're very careful about retroactive changes. We try our utmost to avoid them, especially because we know some folks get attached to their build. However, in cases where the gameplay can be genuinely improved, there are exceptions we're willing to make.

Set items are one of those exceptions, particularly because of their "sticking power." Once you get a full set, you're very reluctant to move away from it, because it did take time to acquire and put together. On the flip side of that is putting in a new version of the set, which then requires players to reacquire it all over again. It also doesn't solve issues that are created by sets with unhealthy gameplay. When defining unhealthy gameplay as something that's either unengaging or legitimately painful (emotionally or physically) to play, it's something we need to address.

Both the Sunwuko and Marauder's changes fall under that category of unhealthiness, though for different reasons. We want gameplay to be engaging (which Marauder's wasn't accomplishing) and enjoyable to play (which Sunwuko's offered, but in a way that was physically painful to execute).

These changes are both quality of life fixes, though it may be hard to discern that at a glance. Marauder's still revolves around Sentries, but now in how they make you better and more powerful. Sunwuko's is still the set where you generate clones, but now they make your spenders more powerful. The path on how we accomplish those goals has changed, but the intent is to make sure that the level of power is the same (or better), even if the journey there is a little different.

The massive test buff on the patch 2.1.2 PTR was removed this week, as the developers ready the next build for testing. That build will bring changes to all these sets, and many fixes, for further testing of patch 2.1.2 and Season 2.
Recent News
Diablo III: Ultimate Evil Edition
The console Diablo III edition includes all of the Reaper of Souls content, and special social features!
PlayStation 3