A look at the next season, which will arrive in patch 2.1.2

News from BlizzCon 2014 unveiled info about the next Diablo III PC patch, which will be patch 2.1.2. The patch will include Season 2, and a preview of that upcoming season provides an early look at what we can expect. There will be more Seasonal Legendary items, and new Conquests and transmogrification rewards for participating in the season. Here's the official preview of the next Season!

Season 1 has been a great opportunity for us to introduce new gameplay mechanics to Diablo III, and we explored adding new challenges and content for you to tackle. We learned a lot from our first Season, and today, we've got some details on our next Season to share that reflect on those lessons.

As we mentioned when we first introduced Seasons, plenty of new items and rewards are coming with Season 2. But that's not all! Patch 2.1.2 will introduce new features that will certainly have an impact on your Seasonal experience. 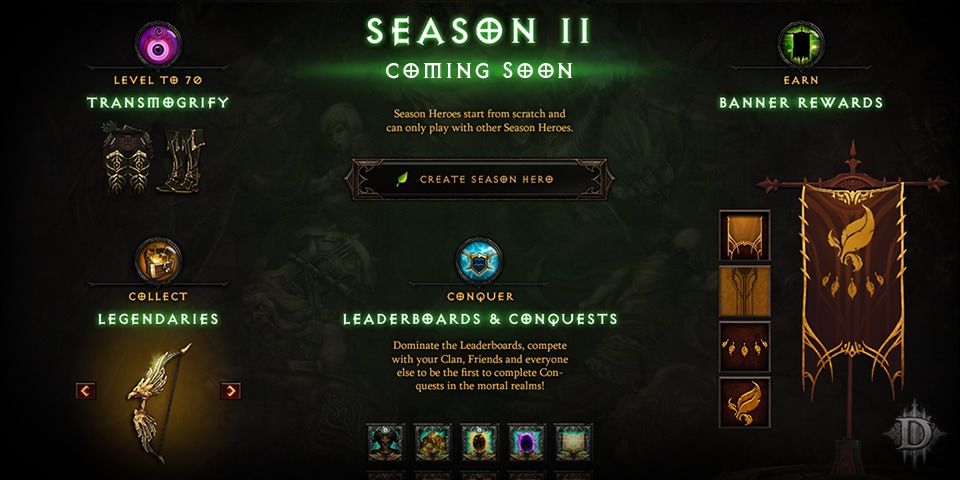 For now, let's focus on what the Season itself is introducing and go over what you can expect from the first day of Season 2.

As we announced with our very first Season preview, weâ€™ll be introducing several new Legendary items with each Season. What would a Season preview be without a look at of a few of these upcoming goodies? 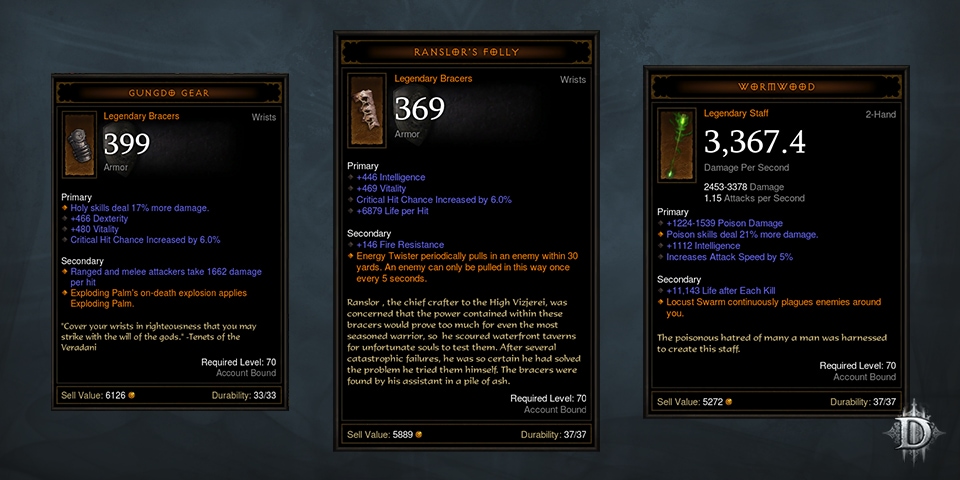 Note that some of the new items we're implementing are previously-existing Legendary items that lacked powerful, game changing affixes. As we add affixes to them and they become Seasonal Legendaries, these items will no longer drop in non-Seasonal games. Once the Season ends, these items will roll over to the regular loot pool for all game types, complete with their shiny new Legendary affix!

Some Conquests in Season 1 provided great gameplay experiences. On the flip side, some also drove gameplay that was less than desirable and, more importantly, not very fun. In Season 2, this observation has guided which Conquests are returning, which are not, and how we implemented new Conquests.

You'll see the return of Conquests that encourage long-term goals, such as Itâ€™s a Marathon and Sprinter. Reaching a specific Greater Rift level or rushing through Campaign mode from Act I to Act V are activities that encourage a variety of gameplay, some of which is outside the norm.  In addition, while they offer a clear goal, they also encourage you to push harder for better results.

You can see this ideal in our new Conquests: Avaritia, Worlds Apart, and Language. These are difficult tasks to achieve and might take some out-of-the-box thinking. Be prepared to challenge yourselfâ€”not just through a quest for gear, but through experimentation and trial and error. We hope you're looking forward to taking a crack at these Conquests just as much as we are! 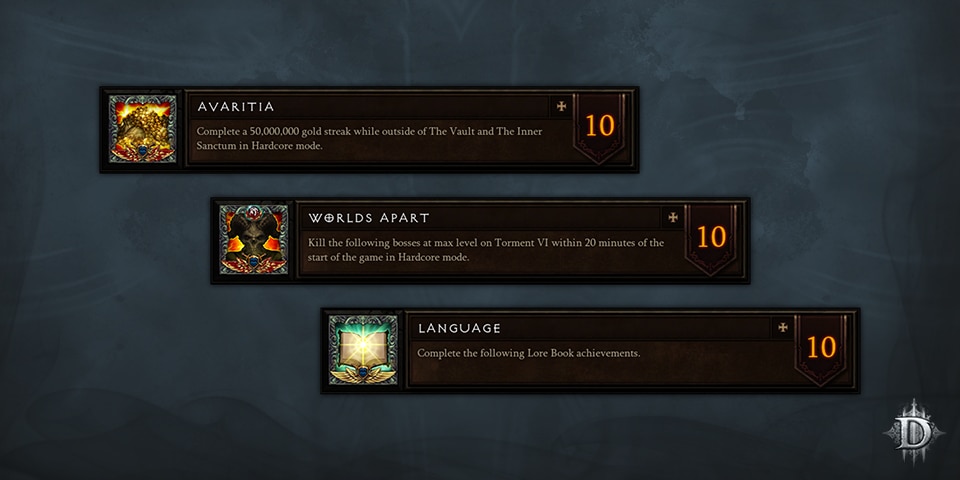 For the same reason we haven't provided Paragon leaderboards, we'd like Seasonal gameplay to be interesting and varied. Leveling achievements encourage the exact opposite style of play. We found that Race to the Top and Living Dangerously produced these unwanted results, so these Conquests will not be returning in Season 2.

Participants of Season 1 might be familiar with our Conqueror's transmogrification set. Reaching level 70 in any Season will award you with two pieces of these exclusive accoutrements. Season 1 introduced transmogrifications for Helms and Shoulders, and for Season 2, you'll be closer to completing the set with Boots and Pants! 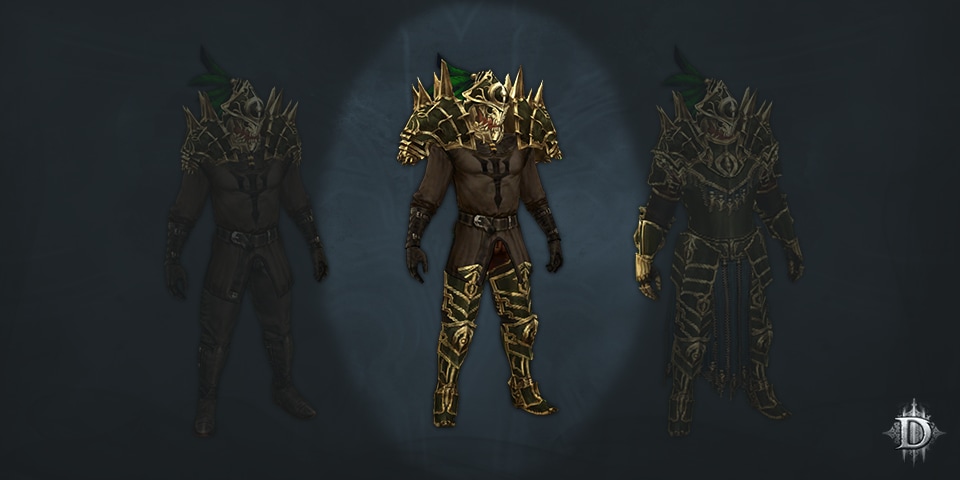 That's not all. We've raised the bar this Season by introducing a new Seasonal reward. Players who participate in the Season will also receive an exclusive full Banner set, including Shape, Pattern, Sigil, and Accent. Each piece of this set is unlocked by acquiring Seasonal achievement points. For each 100 points you acquire, you'll unlock a new piece as follows:

As always, any rewards you earn during the Season are immediately unlocked for use in both Seasonal and Non-Seasonal play.

Q: When does Season 2 start?
A: While we donâ€™t yet have a date to announce for Season 2, we will be notifying the community of the end of Season 1 no less than 30 days in advance. Season 2 should start shortly thereafter. Stay tuned for more information in the future!

Q: How long will Season 2 last?
A:  While we donâ€™t have a specific time frame to share at this time, weâ€™ve heard a lot of feedback on the length of Season 1. Weâ€™ll be taking this feedback into consideration going forward.

Q: When are the non-Seasonal Leaderboards being wiped?
A: Non-Seasonal Leaderboards are tied to what we call â€œEras.â€ We have not yet determined when the end of our first Era will be, but we currently anticipate it coinciding with changes for the next Season.  Weâ€™ll provide an update when we announce an end date for Season 1.

Q: Will Seasons be coming to console?
A: Some features on console are best designed for that platform, and the same is true for the PC version of the game. A large part of the fun of Seasons is the entire community rerolling heroes together at the same time. The offline and disconnected nature of console does not support this style of play.  As a result, we do not currently have plans to implement Seasons on console.

The Season is Coming...

We have a lot in store for Season 2, as well as Seasons to come. We hope you've enjoyed this peek at what lies ahead! Season 2, as well as features coming in Patch 2.1.2, will be available for testing very soon on the PTR. We look forward to sharing these changes with you and hope you'll join us to test them thoroughly!

What aspect of Season 2 has you the most pumped? Are you eager for another fresh start, or did a new Seasonal Legendary catch your eye? Is there a Conquest you canâ€™t wait to tackle? Let us know in the comments and get readyâ€”the new Season will arrive before you know it!