Diablo IIINews10% Chance of a Legendary Item From Kadala

10% Chance of a Legendary Item From Kadala

Details on Blood Shard gambling, and issues in Patch 2.1.1 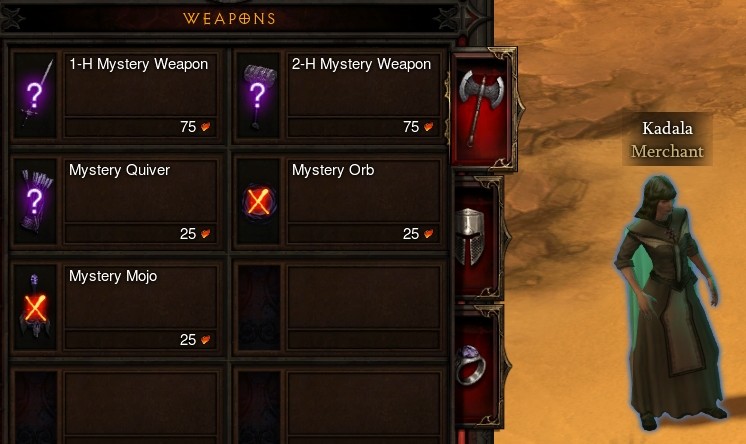 Diablo III patch 2.1.1 was a small patch that included big changes. One of the biggest was the dramatic price increase for Blood Shard purchases at Kadala. Developer Travis Day took to the forums to explain the cost increase, and why players will now get more Legendary and Set items with gambling. Other Blizzard Blues posts include explanations of patch note specifics, and a lingering Legendary gem bug that will take another patch to fix.

Travis Day on Blood Shard Gambling
The cost for buying mystery items at Kadala jumped substantially in patch 2.1.1, as seen above. Blood Shard purchases cost 5 times more than before. Diablo III developer Travis Day took to the forums to detail the change indepth. The chance of obtaining a Legendary or Set item from Kadala was increased more than 5 times, giving players a better chance of seeing those items. There is now a 10% chance of obtaining a Legendary or Set item as a Kadala purchase.
Post by Blizzard (Blue Tracker, Official Forum)
Hey there I see a lot of threads popping up on this topic so I wanted to stop in for a visit and explain the changes. The Kadala change is primarily meant to be a quality of life change for players. Having to fill up your inventory and run back and forth to the blacksmith could be a mildly cumbersome experience and we wanted to improve that. All items on Kadala had their cost increased, when this was done the chance for her to give you items was also increased but by more than the cost justified. For the same number of shards as before players will now walk away with 1/3 more legendary items.

Since we wanted this change to be purely better for players and we know that many people get their crafting materials from Kadala we also decided to add a lot of extra crafting reagent drops to Greater and normal Rift Guardians. The overall impact should be that you are getting roughly the same amount of crafting materials, except instead of getting primarily yellow mats like Kadala gives you, the mats on the Guardians could be white, blue, or yellow. This should help even out the quantities of assorted material types instead of flooding players with just one type like Kadala was inclined to do.

We will continue keeping on eye on all the effects of the changes. If we find that these changes had any meaningful negative impact on the ability for players to generate crafting materials we will make further tuning adjustments to the amount of material dropped by Rift Guardians.

TLDR - You get more items than you used to!
For clarity since my phrasing is losing people. Blood shard costs are 5x higher, to keep the same reward per shard I raised drop rates by 5x as well. Then after that I further raised the legendary chance by another 33%. The chance to get a legendary from Kadala is now 10%. Since the system is random players will inevitably go on streaks but over the course of time all players move towards the average and that average is now 33% more items than before.

On the crafting mat side, the material drops are random so its possible for players to find white, blue, or yellow mats in varying quantities. If you see 1 Veiled Crystal on a kill that doesn't mean every kill drops 1.

Shield Bash Change
In the patch 2.1.1 patch notes, the Crusader Shield Bash skill was given a fix detailed as: Can now be interrupted during the hit animation. This was an improvement for the skill, so that Crusaders can interrupt it to cast another skill if they need to.
Post by Blizzard (Blue Tracker, Official Forum)
Posted by: Acronen09/23/2014 03:18 PM

Second, this change to shield bash is a very minor and quality of life good thing actually. It makes it so you can use your abilities now while in the middle of holding down shield bash, whereas before you couldn't. That means you can pop your defensive cooldown, or shield glare, or bowmen and it will actually go off now when you need it to instead of ending up dead because you were pushing it but unable to have it take effect. Mostly noticeable the higher you go in GRifts.

The wording on the change makes it sound like a bad thing, or a nerf, but in play it really isn't. I have already noticed the change and it is a good thing overall.

Dead on assessment. I understand how the wording in the patch note could be misinterpreted. The intent of this change is to allow the Shield Bash animation to be ended early by the player in order to allow for more fluid play. All attacks in the game currently work this way, and Shield Bash was an outlier, so we've fixed that.

We've had a lot of feedback on Shield Bash "feeling clunky" and this was an issue we identified to smooth it out. Give it a try and let us know how it feels. We're eager to know!

Infernal Machine Keys All Group Drop
Another patch note that could be misunderstood was that the Key of Bones, Key of Gluttony, and Key of War are all now group drops. That was already the case for the Key of Evil, so all those keys for the Infernal Machine now have a group chance to drop.
Post by Blizzard (Blue Tracker, Official Forum)
Posted by: Jaetch09/23/2014 01:05 PM

The Key of Evil is apparently already a group drop to begin with, so it's not included amongst the other three described in the patch notes.
This is correct (and thanks to Jaetch for jumping in to answer).

The Key of Evil was already a group drop, and this change just brings the other key drops in line with that one. I understand the confusion, though, as it's been a while since the change to Key of Evil, and most people will have forgotten about it at this point.

Bane of the Trapped Not Fully Fixed
The Legendary gem Bane of the Trapped had multiple issues, one of which was fixed in patch 2.1.1. The gem still does not work properly with item procs. That will be fixed in a future patch, like a patch 2.1.2 or patch 2.2.
Post by Blizzard (Blue Tracker, Official Forum)
Bane of the Trapped's bonus damage does, as the patch notes indicate, now appropriately extend to monsters affected by Frozen. However, the fix for item procs didn't quite make this patch. I talked a little about this yesterday, so to reiterate:

This particular bug is proving somewhat stubborn, but weâ€™re working to get a fix implemented as quickly as possible. Right now, thatâ€™s looking to be a client-side patch, though depending on testing, it may not make the next one.

We were unable to implement this particular fix in Patch 2.1.1, but we are working on one for a future patch.

Bugs with Salvage All Buttons
There are a couple of bugs with the Salvage All buttons at the Blacksmith since patch 2.1.1. One bug is that those buttons can still show as being usable even if there is nothing in a character's inventory that can be salvaged by them. This happens when there is an Bind on Account item in inventory that should be able to be salvaged. The Salvage All aren't working on those BOA items at all right now, which is also a bug.

Update: It was initially stated as an intentional change, that the Salvage All buttons no longer salvaged BOA items. That has been clarified and both issues are considered a bug, that will be fixed in a future patch. This article has been corrected with the updated information.
Post by Blizzard (Blue Tracker, Official Forum)
We've identified a bug that prevents account-bound Rare items from being broken down when players use the Salvage All option at the Blacksmith. We are looking to fix this bug at a future date, but don't have an ETA to share at this time.

Thank you all for the reports, and good hunting out there!

Diablo III Patch 2.1.1 Known Issues
The known issues documented so far with the patch include the bug with the Salvage All buttons, and the lingering issue with Bane of the Trapped. Those will likely be dealt with in another small patch, at some point in the future.
Post by Blizzard (Blue Tracker, Official Forum)
Hello everyone, and welcome to Patch 2.4.1! Below you will find the Known Issues list for our 2.4.1 patch. Please do not report bugs that you see on this list, as we already know about them, and help out other players reporting bugs by referring them to this list.

As a reminder, this list will not list every bug that is active in the 2.4.1 patch. What it is listed here are a select few issues -- chosen due to visibility and impact -- that are active and confirmed as bugs by Quality Assurance with verifiable steps and (in most cases) an expected fix. Just because a bug is not on this list does not mean we don't know about it! In addition, potential exploits and the like will never be listed here.