Blizzard Blues on getting in The Vault, and Legendaries not coming to console patch 2.1 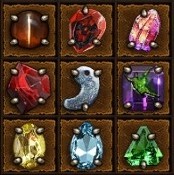 The Legendary Gems currently in Diablo III are just the start! There will be more of those powerful jewels added in a future patch, including some that are oriented towards defense. The latest Blizzard Blues posts covered that, and a request for feedback about Nephalem Rifts that do not have enough monsters to complete.

New Legendary Gems in a Future Patch
The first group of Legendary Gems were added in patch 2.1, and mainly provide offensive effects. A future patch will bring new Legendary gems, including more with bonuses that are related to defense. These gems are a terrific method for the developers to add interesting effects to the game, that all classes can share without having to use an item slot that might be needed for a set or Legendary item.
Post by Blizzard (Blue Tracker, Official Forum)
Great discussion going on here, guys.

Regarding Chrono's second point, we do have plans to add more Legendary Gems to the game in the future, including those that are more defense-oriented. We don't have a time frame to share for when the next batch of Legendary Gems will be added just yet, though.

In the meantime, we've been keeping a close eye on your gem suggestions, so if you've got an idea...let us know!

No Seasonal Legendaries for Console in Patch 2.1
The console group in the Diablo III team is working to bring patch 2.1 to the next-gen consoles, adding the new content to the Ultimate Evil Edition on the Xbox One and PlayStation 4. Seasons will not be part of the content copied from the PC Diablo III patch 2.1 to the consoles. Because of that, the Seasonal Legendary items will also not be included in the patch. Those Legendary items might be added (without Seasons) in a future Ultimate Evil Edition patch, however.
Post by Blizzard (Blue Tracker, Official Forum)
Because the Seasons will not be included in patch 2.1.0 for next-gen consoles, the Seasonal Legendaries will also not be included. We haven't released information for plans beyond 2.1.0 yet; however, as info becomes available we'll be sure to share it with all of you.

The Vault Spawn
Getting into The Vault is a rare occurrence, since only the very occasional Treasure Goblin leaves behind the portal to Greed's Domain when it is killed. Anyone in the game when the goblin is defeated can take the portal into The Vault, even if they aren't in the area at the time of its death. Good luck getting into this gold-filled heaven!
Post by Blizzard (Blue Tracker, Official Forum)
Posted by: Krazymagic09/18/2014 01:16 PM

The vault will start to spawn when the goblin dies. You will see a little swirl animation and then the portal pops up. Anyone that was in the game at the time of the goblins death may enter the portal. You do not have to be near the kill either. You could be in town or in another location farming and someone could kill a goblin and spawn a portal then you could zone to him and enter. Anyone who enters the game after the portal has spawned can NOT enter, though they can see it in the world.

A very accurate description! To reiterate, the portal to the Vault can spawn in both solo and group setups in Adventure Mode (though not inside of Nephalem or Greater Rifts). In addition, any players who were in the game at the time the portal spawns are eligible to enter it, though they need not have been part of the goblin kill itself.

Chat Box in the Way
The user interface of Diablo III is a static setup, with few options for customization. Because of the positioning of the chat box, it can get in the way when trying to interact with the interface for the Rifts.
Post by Blizzard (Blue Tracker, Official Forum)
Posted by: Hysteria09/16/2014 06:26 PM

Every time I open a rift, great rift or trail run, I have to battle my way through a wall of messages to click accept.

I've encountered this when I'm playing, and agree that it's an inconvenience. I'll be sure to bring this up in our next meeting.

Furthermore, whenever there is a battle going on in the lower left hand side of my screen I always seem to click on something in the chat that screw up my hotkeys which usually results in my death. Blizz please look into fixing this.

I'm not as familiar with this issue, though, but I'm interested in hearing more about it. Thanks for the feedback, everyone!

Not Enough Monsters in Rift - Feedback Requested
There are occasional issues with some Nephalem Rifts and Greater Rifts not having enough monsters, so that even once all the monsters in the Rift are killed, the progress bar doesn't complete. Tsarnis from the Diablo III quality assurance team posted to ask for feedback on this issue, that can be posted in the battle.net thread. This only relates to there not being enough monsters to complete the Rift, not monster density in general.
Post by Blizzard (Blue Tracker, Official Forum)
Hi Everyone,

In recent weeks we have seen reports of players encountering Nephalem Rifts or Greater Rifts that seemingly cannot be completed due to lack of monsters. If possible, we would like to gather a little bit more information from you about the circumstances in which you encountered an issue like this.

If you have encountered a situation where you could not complete a Rift due to a lack of sufficient monsters left to fill your progress bar, please reply to this thread with answers to the following questions:

Lastly, if you can, posting links to screenshots of yourself in the rift, the monsters in the rift, and of the open area map is greatly appreciated as it helps us better identify any remaining potential problem areas.

We really appreciate you taking the time to read this and add your replies. Thank you!

I just want to note and clarify that we are not soliciting opinions on density, suggestions for balance improvements, or any other type of feedback. We are looking for additional information to help us identify any remaining situations in which you could be put into a position to not be able to complete a rift at all, specifically because there are not enough monsters remaining in the Rift to fill the progress bar. Reports of instances where you simply ran out of time, or were forced to explore more of the map to find additional monsters are not what we are looking for.

That said, this is not to say that this kind of feedback isn't appreciated. The bug report forum is simply is not the place for it. I hope that helps clarify what we are looking for. Thank you for your understanding and assistance in this.

Server Maintenance on Tuesday
There will be regular Tuesday Diablo III server maintenance this week, scheduled to run for 10 hours, from 1AM Pacific to 11AM.
Post by Blizzard (Blue Tracker, Official Forum)
We will be performing maintenance beginning on Tuesday, September 23 at 1:00 AM PDT and we expect the service to be available again at approximately 11:00 AM PDT. During this time the game and many web services will be unavailable.

Thank you for your patience.
Recent News
Diablo III: Ultimate Evil Edition
The console Diablo III edition includes all of the Reaper of Souls content, and special social features!
PlayStation 3