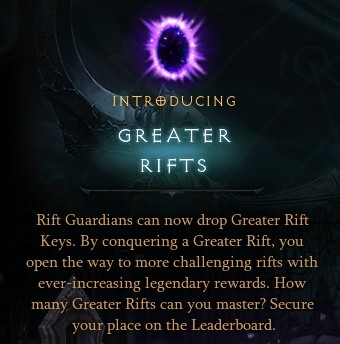 In the three weeks since Diablo III Patch 2.1 was released, players have been putting in a lot of time with the new features like Greater Rifts and Legendary Gems. The Diablo III developers are reviewing the data from all those players, to iterate the design of those systems. The latest Blizzard Blues posts include areas that will be improved in the future, including Greater Rift monster density, fixing bugs in multiple Legendary gems, and providing more ways to acquire and use regular gems.

Greater Rift Monster Density
Much like regular Nephalem Rifts, Greater Rifts have widely varying amounts of monsters. This doesn't matter much in a normal Nephalem Rift as long as there are enough monsters around to finish it. But in the highly competitive Greater Rifts, lower monster density can make it difficult to quickly kill enough monsters to get the Greater Rift Guardian to spawn. This will be addressed by Blizzard in an upcoming patch, along with other parts of the Greater Rift gameplay.
Post by Blizzard (Blue Tracker, Official Forum)
Hey guys, thanks for your ongoing feedback on density in Greater Rifts. Finding the ideal density for every map for every player is not something we're likely to perfect in one fell swoop, but we are listening and will indeed be making adjustments to Greater Rift monster density in future patches.

I realize it may be frustrating for some not to have an exact deadline for when monster density will be "just right," but it's going to be an ongoing process, and we'll continue to iterate on density (and the Greater Rift experience as a whole) with help from your feedback.

Simplicity's Strength Bug
The level 25 bonus on the Legendary gem Simplicity's Strength provides a heal when using a Primary skill. Currently there are multiple skills and rune combinations where that gem does not activate when it should. The skill reported was the Wizard Electrocute - Chain Lightning, but the issue has cropped up with other skills. Blizzard is working on fixing the bug, so that all Primary skills and their runes will properly activate the gem.
Post by Blizzard (Blue Tracker, Official Forum)
Posted by: icebeam09/15/2014 08:03 AM

I have found a bug with the Electrocute skill. When using the Legendary Gem "Simplicity's Strength" at rank 25 the "Primary skills heal you for 2% of maximum health on hit." does not work with the rune "Chain Lightning" all other runes work just fine.

You're correct about this being a bug, and thanks for bringing this up. I'm sure you're not the only one who has noticed. Right now Simplicity's Strength doesn't always proc its healing effect when it's supposed to. The good news is that it's something we're not only aware of, but something we're currently working on correcting, too. I don't have any more details on that to share just yet, but it is in the works.

Also, I'd like to confirm that Simplicity's Strength is meant to work with all Primary skills, which includes Witch Doctor and Wizard Signature skills.

Bane of the Powerful Bug
Another Legendary gem with a bug that prevents it from activating properly is the commonly used Bane of the Powerful. When elite Corpse Raiser monsters are killed, the gem currently does not provide the buff. That issue is also being investigated, to likely be fixed in an upcoming patch.
Post by Blizzard (Blue Tracker, Official Forum)
We've found a bug with Bane of the Powerful that prevents it from activating when killing elite Corpse Raisers. We're planning on implementing a fix for this bug in the future, but we don't have any information to share at this time about when that will be. Thanks for the report, Lockewarden!

Farming for Gems
As mentioned previously by developer Travis Day, new options for regular gems are being considered for an upcoming patch. Community representative Grimiku expanded a little on those ideas. There will likely be two separate features added: one to help acquire a specific type of gem, and another that provides a way to use up extra gems that you currently don't need.
Post by Blizzard (Blue Tracker, Official Forum)
Posted by: Sollan09/15/2014 05:06 AM

But why can't i use my other Gems to keep rolling for a socket (ive got thousands just sitting there, not ever going to be used), I want to play your game blizzard with its brand new features, but you wont let me with your bad game mechanics. pls, pls, pls fix this. This is the biggest problem with the game right now.

you've gone and made leg gems a major part of the game. but we cant enjoy it because we need to use the worst iterated mechanics in the game to do so.

Any kind of crafting done in large amounts (for example, rolling for a socket on Rings and Amulets) is going to consume resources to the point where they risk being depleted, which is fine on its own and an intended result. After all, nothing adds value to a resource like running out of it.

That said, we agree that this is an issue and feel the root of it—in this case, never having enough Amethysts or Topazes—lies in the fact that there isn't a reliable method of replenishing the particular resource being consumed. To address that, we’re currently looking at ways we can allow players to increase their ability to obtain specific gems they need.

On the flip side, we’re also aware that some players wind up stockpiling certain kinds of gems because there aren't a lot of compelling reasons to use them. We want to implement more uses for those gems, and are looking at various ways to achieve that too.

Boon of the Hoarder Gold Explosions
Grimiku also clarified how the Boon of the Hoarder Legendary gem works. As the gem is leveled, "gold explosions" appear more often. Increasing the stat Gold Find, from items or Paragon Points, will increase the amount of gold from those explosions.
Post by Blizzard (Blue Tracker, Official Forum)
Posted by: eVo09/16/2014 11:13 AM

Does the amount of gold dropped scale with the % chance to cause the explosion?

Leveling up the Boon of the Hoarder will cause more frequent explosions of gold, but does not influence the actual amount of gold per explosion. Having a higher gold find percentage will yield more gold per proc, though.

Battle.net Diablo III Forum Cleanup
The official Diablo III battle.net forums are getting cleaned up, with some lesser used forums being retired, and a new one added. Forums being closed include Looking for Group [PVE], Quests, Crafting and Artisans, and Followers forums. There are suggested other forums in the announcements, to take those respective topics.

The Clans & Communities forum now offers a single spot to look for or chat about those social features in the game. If you are looking for a new Community or Clan to join, look no further than the official battle.net forum for that, in the Americas or European region.