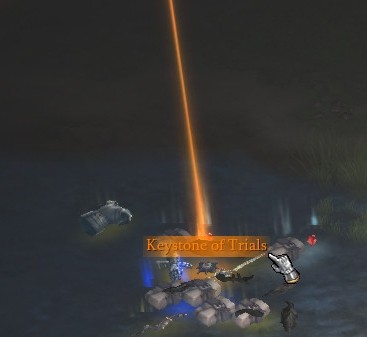 The official Diablo III forums have many comments daily from the community team. Occasionally one of the Diablo III developers will also stop by and offer thoughts on specific topics in the game, and announcements about upcoming changes. Diablo III game designer Travis Day had multiple posts that are detailed in this Blizzard Blues posts roundup: he discussed the Keystone of Trials drops and the beam of light for it, as well as changes in a future Diablo III patch for gems.

He also noted that the orange beam of light that shoots up from a Keystone of Trials, seen above, is going away. This is in line with other non-equipment Legendary items that previously had beams of light when they dropped, and no longer do. The keystone is a common enough drop that it doesn't need that light beam, dubbed the "beam of disappointment" in the thread asking about it.
Post by Blizzard (Blue Tracker, Official Forum)
The keys are not part of the legendary drop table, they are entirely separate entries in the table and have no impact of any kind on whether or not you will get legendary items.

Also I'll be removing the beam from the keys in a future patch.


Post by Blizzard (Blue Tracker, Official Forum)
Yeah Blizz should totally pull those beams so they stop trolling me. Someone should do something about this!

*Removes the beam in a future patch*

Getting the Gems You Want
Travis Day also jumped into a discussion of having enough gems - the normal kind, not the new Legendary Gems. Enchanting jewelry rings and amulets uses up specific gems, based on the item being enchanted. Because of that, many players run low on specific gems (most often Topaz) even while they may have an abundance of other kinds.

In a future Diablo III patch there will be new features to deal with this. It sounds like there may be two different types of changes for gems - one that provides a way to somehow "farm" a specific type of gem, and the other that lets a player get rid of excess gems. Or it may all be part of the same new system - we will see once that patch arrives!
Post by Blizzard (Blue Tracker, Official Forum)
This is a topic that comes up with some frequency both internally and externally. We have plans for a future patch that will introduce more uses for any gem you have excess of as well as a way to increase your ability to get specific gems that you are lacking *read Topaz*.

As a general philosophy point, anytime we introduce mechanics that are intended to consume limited resources this is something that players will encounter. Whether it's gold, gems, or a specific crafting material, these are all meant to be gathered and consumed at varying rates. Inevitably, and intentionally, there will be times when you need more of some material than you have. The problem isn't that you are running out, the problem is when there is no mechanism for you to alter your gameplay to gather more of the thing you need. When you run out of blue material you start picking up blue items you were ignoring before, when you run out of gold you equip your Boon of the Hoarder if you've found one etc. The problem isn't that people are running low on Topaz from enchanting, the problem is that you have no way to increase the rate of Topaz you find when you want to. This is what we will be addressing in the future.

Achievements from Seasons
Even with the lengthy list of details on exactly how Seasons work and what is transferred over after a Season is done, there were still a few questions about achievements in Seasons. Community representative Tyvalir clarified how achievements work, both for obtaining new achievements in a Season, and also the rollover of progress towards big achievements.
Post by Blizzard (Blue Tracker, Official Forum)
Posted by: Glacius09/05/2014 10:40 PM

I saw there is two new stuff in seasons for achievements, the ''seasonal only'' achievements and the ''conquests''. Will these two ''new tabs'' roll over to my non-season achievements after? Will they be transfered to feat of strenght? What's gonna happen with these?
Great question. Conquests and Seasonal achievements are handled differently:

One last thing, what happens to the achivements like ''complete 10,000 bounties''. If I complete a bounty in season, does it count towards my non-season achievement? If it doesn't, here is my question, will the number of bounties I complete be transfered to my non-season number after season? Let's say I have 4,000 in non-season and I do 2,000 in season.. at the end of the season is my number of bounties done gonna be 6,000?
Yup! All progress you earn toward an achievement during Seasons should count toward your non-Seasonal achievements as well. (In the example you gave, you should have 6,000 bounties after your Seasonal progress carries over.)

UPDATE: ITS POSSIBLE! I JUST got Leonine Bow of Hashir from gamble :)
Congrats on getting the Seasonal bow from Kadala! As you yourself discovered, it's absolutely possible to gamble Seasonal legendary items from her, so long as you are playing a Seasonal character.
Recent News
Diablo III: Ultimate Evil Edition
The console Diablo III edition includes all of the Reaper of Souls content, and special social features!
PlayStation 3