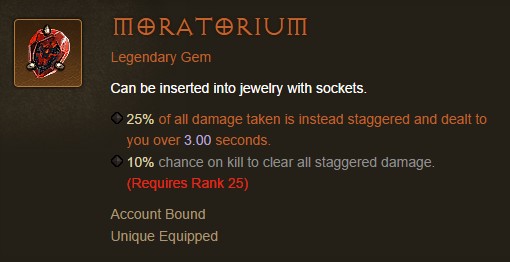 The new Legendary gems in Diablo III are a fun part of the Greater Rifts process, with awesome powers that can be upgraded over time. At least two of the Legendary gems have bugs right now, the Moratorium and Bane of the Trapped gems. Hardcore players should not use the Moratorium gem until a hotfix goes in, since it can kill characters that would otherwise be safe! Here are the details on those gems, and other recent Blizzard Blues posts.

Hotfixes for Moratorium and Bounties
The Legendary gem Moratorium, seen above, was designed to help smooth out the damage received by a Diablo III character. This can help staying alive, which is of utmost importance for hardcore characters, who often use skills such as Indestructible to avoid dying. Right now there is a bug with the gem that prevents those type of skills, and similar item powers, from activating when damage is being spread out by the gem. Any characters who use these death-prevention skills or items should skip the gem until the hotfix goes live to take care of that bug! See a related reddit thread for more discussion on the items and skills that do not work properly with the Moratorium gem.

Other hotfixes recently went live that disabled four no-kill Bounties, which will be retuned and added back in a later patch.
Post by Blizzard (Blue Tracker, Official Forum)
A new hotfix has gone live. One additional hotfix has been added.


Bane of the Trapped Gem
Another Legendary gem has an issue that is being looked into. Bane of the Trapped is a powerful gem that provides a damage bonus to enemies affected by Slow, Cold or other control-impairing debuffs, with a secondary effect that generates just such a debuff. However the gem is not interacting properly with item affects, so that is being investigated to be fixed.
Post by Blizzard (Blue Tracker, Official Forum)
Posted by: d2JUNKIE09/05/2014 08:33 AM

Does the reduces movement speed counts as a control impairing effect?
In other words does the gem proc itself at melee range?
Thank you in advance for your reply

The secondary effect of Bane of the Trapped does trigger the primary effect. So, all enemies within 15 yards automatically suffer 30% movement reduction once the gem is level 25+, and receive increased damage, too. It's generally a pretty sweet gem for most melee characters.
Can you toss this info to the appropriate dev please!!! <3

This has already been done! :) There's an investigation pending on Bane of the Trapped and its interaction with item procs, but we don't currently have an ETA for a resolution just yet. Definitely a bug, though!

No Time For Losers Achievement
The No Time For Losers hardcore achievement is currently bugged. It does not give credit if the champion kills were completed before patch 2.1 went live, although players who get the kills now will activate it. The achievement should be fixed in a future patch.
Post by Blizzard (Blue Tracker, Official Forum)
Ashi,

I can confirm for you that it's a known issue. I believe they intend to address it in a future patch/update but I couldn't say when that might occur.

Tuesday Server Maintenance
The common Blizzard server maintenance is running this week, scheduled from 3:00 AM Pacific Time to 11:00 AM.
Post by Blizzard (Blue Tracker, Official Forum)
We will be performing maintenance beginning on Tuesday, September 9th at 3:00 AM PDT and we expect the service to be available again at approximately 11:00 AM PDT. During this time the game and many web services will be unavailable.

Thank you for your patience.

Read on for more Blizzard Blues posts, including a lengthy discussion of what will happen when the first Diablo III Season ends.

I am guessing rifts are based on the highest character in game then?

Monsters that already exist will not have their levels changed in this manner, but any monsters spawned after a higher level character enters (or leaves) a game will. What this means is a monster that you're already fighting won't have a sudden level change just because someone enters or leaves the game, but the next set of monsters you find should.
Posted by: Boomstick09/05/2014 11:36 AM

Does this apply to paragon levels as well, or does that level stay in the 1-70 range?

It sticks to the 1-70 range, and Paragon levels do not influence monster levels. Good question!

Season Ending Transfers
The first Season is running right now in Diablo III. Lylirra gave extensive details to clarify just exactly what the process will be, once Season 1 ends and (nearly) everything is transferred over to the non-Seasonal side.
Post by Blizzard (Blue Tracker, Official Forum)
During a Season roll-over (which occurs after a Season has ended), your Seasonal heroes, inventory, shared stash, and Paragon experience will be transferred to your non-Seasonal profile.

What I want to know is what happens when the blood shards from seasons puts you over your cap for non seasons, will those extra vanish or will they go over the cap.

Info's linked above, but here's a quick quote:

So basically after the season is over we will have two of every gem? I thought blizzard didn't want this.

We don't want players to lose out on progress gained during a Season, if possible. In this case, we feel it's a fair compromise to let Seasonal players have more than one gem type. We'll be keeping a close eye on your feedback, though, and may make changes for future Seasons.
Posted by: Draconum09/04/2014 03:12 PM

Why is the blood shard cap even there in the first place?

Because we want to encourage players to actually spend their Blood Shards. Without a cap in place, or with a cap higher than 500, the tendency we've observed is that players will hoard their shards rather than spend them at a regular frequency.

As we make changes to Blood Shard drop rates, Kadala, and/or both, the cap may change too, but we're okay with it being 500 right now. Thanks for the feedback, though! Will certainly pass it along.
Regarding the non-Paragon experience note, what does that mean, exactly?

If I have a lvl 69 seasonal character at the time the season ends, will that character lose all of its experience in the rollover and become a lvl 1 non-season character?

Your hero itself won't really change in any way. All that'll happen is that its Seasonal "flag" will go away. It'll stay level 69, and any items on that hero at the time of the roll-over will remain.

What "Non-Paragon experience will not transfer" means is that any sub-70 (non-Paragon) experience earned during a Season will not roll-over and merge with your non-Seasonal Paragon pool.
Posted by: Necro09/04/2014 03:43 PM

What about the Transmoggs I found in Season, I don't acuired in non-season?

I am maining a Wizard, and found most of the Wizzy stuff. In the season however I play a WD and found a couple of Zuni / Jade Harvester already.

Unlocked appearances will transfer over as well (this include the Season-exclusive appearances).
Posted by: MaxMind09/04/2014 02:54 PM

After the end of the current Season, that Season's achievements will be wiped. However, you will still be able to view your Seasonal achievement point total and completed Conquests in your hero Profile.

Also, under current design, if you unlock an achievement on a Seasonal hero that you haven’t already unlocked on a non-Seasonal hero, you’ll gain credit for both at the same time.
Posted by: Fireball09/04/2014 04:38 PM

season characters will be transfered to regular ones after seasons end - what if i have no free character slot left?

If your stash is full I am guessing you wont be able to transfer? Are you planning on adding more stash tabs?

Shared Stash: Items in your Seasonal heroes’ shared stash will be mailed to your Normal/Hardcore non-Seasonal profile. These items can be retrieved by entering a game on any non-Seasonal hero and clicking on the mail icon located in the lower left of your screen.

These items aren't automatically placed in your non-Seasonal stash, so you can wait and make room first before claiming them (if needed). Under current design, mailed items from your Seasonal stash will remain available for 30 days after a Season has ended.
Posted by: Stan09/04/2014 04:42 PM

New Seasonal Legendary items will be added to the non-Seasonal loot pool after the current Season has ended. It's not yet decided if those Legendaries will be added as soon as the current Season ends or when the next Season begins. Still TBD!
Recent News
Diablo III: Ultimate Evil Edition
The console Diablo III edition includes all of the Reaper of Souls content, and special social features!
PlayStation 3