Plus all the details for BlizzCon 2014 Virtual Tickets

A treasure goblin giveaway from Blizzard has started that gives a chance at winning 1 of 20 cute goblin packs. Sign up now for a chance to win! Blizzard has also opened up the sales for BlizzCon 2014 Virtual Tickets. For fans who can't attend the event in person, it is a great way to watch all the panels and learn about what's happening next across all of Blizzard's games. We expect Diablo III news about upcoming patches at this year's BlizzCon, including some fun new content.

To celebrate the arrival of patch 2.1.0 on PC, we're giving away some seriously epic loot! Join in on the party and enter to win 1 of 20 Treasure Goblin Packs today.

What's in a Treasure Goblin Pack, you ask? Each prize pack contains an adorable Treasure Goblin plush as well as his recent bounty: an exclusive 15'' x 22'' Treasure Goblin print illustrated by Oliver Chipping at BlizzCon 2010. (Note: You don't need to kill this goblin to claim his haul!) 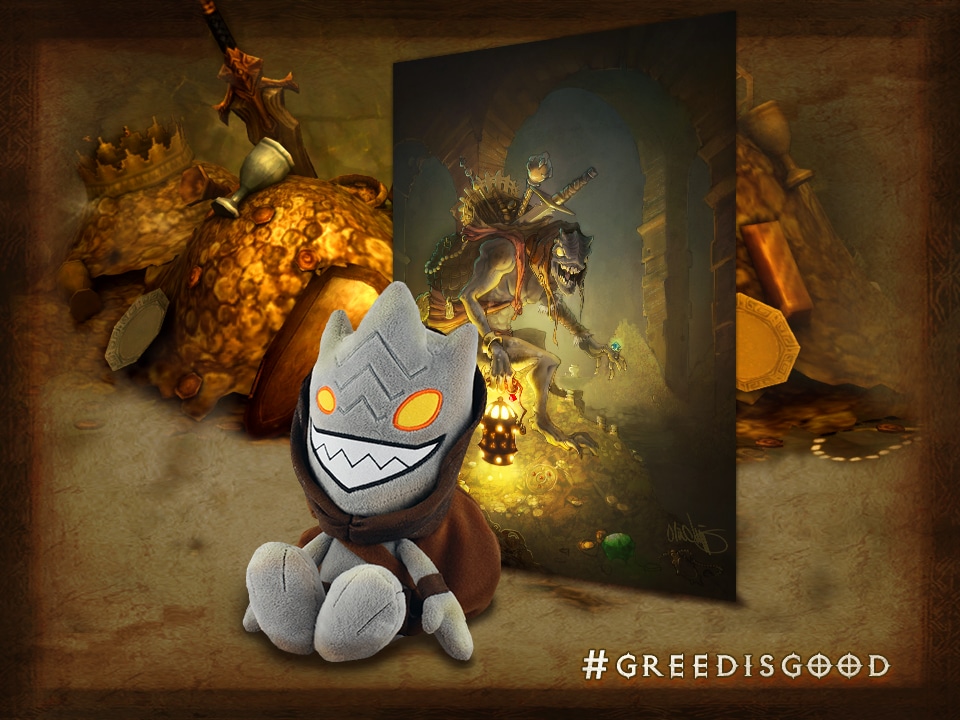 Entering the giveaway is easy—just click the image above, fill out a form, and you're done!

For more information and to enter the giveaway, click here.


Read on for all the details about the BlizzCon 2014 Virtual Ticket, including an extensive FAQ.

This BlizzCon, get the best seat in the house—your own! You can watch Blizzard’s two-day community celebration online this November 7 and 8 with the BlizzCon 2014 Virtual Ticket, available for purchase now in the Battle.net Shop.

The Virtual Ticket lets you be a part of the biggest Blizzard universe mash-up this side of Heroes of the Storm—right from the comfort and convenience of your own home. The Virtual Ticket provides access to two days of live HD BlizzCon coverage across two streaming online channels, along with on-demand replays and DVR functionality so you can catch any of the action you might have missed. Here’s what you get:

Get the latest news and developments on World of Warcraft, StarCraft II, Diablo III, Hearthstone, and Heroes of the Storm, straight from the people who make ’em. The Virtual Ticket gets you access to all of the panels on the Main and Panel stages, along with in-depth interviews you won’t see anywhere else.

Bear witness to the full creative force of the Blizzard community in the Costume and Talent contests, held live onstage Friday night. Guiding us through this year’s evening of inspired insanity will be comedian Chris Hardwick (@nerdist), host of shows like Comedy Central’s @midnight and AMC’s Talking Dead, and overmind of Nerdist Industries—home base for a horde of geek-minded podcasts and other multimedia pursuits.

The Virtual Ticket also gets you a front-row seat to the epic closing ceremony on Saturday night. Acts like The Offspring, Ozzy Osbourne, Foo Fighters, Tenacious D, and Blink-182 have closed out BlizzCons past—we’ll unveil our plans for this year’s finale closer to the show.

Every BlizzCon, attendees and Virtual Ticket holders receive a treasure trove of commemorative in-game loot to mark the occasion. This year, the development teams are crafting goodies for World of Warcraft, StarCraft II, Diablo III, Hearthstone, and Heroes of the Storm—but that’s all we’re going to say about that for now. . . .

You’ll also get early access to a limited-time online BlizzCon merchandise sale featuring a selection of commemorative items that will be available for purchase at the show.* This special sale for BlizzCon attendees and Virtual Ticket holders is scheduled to take place from October 17 through November 11, and will be followed by a public sale offering a more limited selection of items. We’ll have more details on the sale in the coming weeks.

Even if you don’t purchase a Virtual Ticket, you’ll still be able to catch plenty of BlizzCon action free online. Coverage of the BlizzCon opening ceremony and this year’s BlizzCon eSports tournaments—including the StarCraft II World Championship Series Global Finals, World of Warcraft Arena World Championship, Hearthstone World Championship, and Heroes of the Storm exhibition matches—will be streamed free in HD at www.blizzcon.com. The StarCraft II finals will also be available to watch at the official WCS website.

*While supplies last. All orders placed in the online BlizzCon merchandise sale will be shipped from the United States; international shipping rates may apply.

What is the BlizzCon® 2014 Virtual Ticket?

When you purchase the Virtual Ticket, you’ll  be able to switch freely between multiple high-definition (720p) channels dedicated to different areas of BlizzCon, allowing viewers expanded access to the content they're most interested in. The Virtual Ticket grants you complete access to the Main and Panel Stage channels, featuring the following BlizzCon content:

Yes, Virtual Ticket holders will also receive the commemorative BlizzCon 2014 World of Warcraft, Diablo® III, StarCraft II, Hearthstone, and Heroes of the Storm™ in-game goodies (details to be announced at a later date). The goodies will be linked to the Battle.net account used to purchase or redeem the Virtual Ticket, and will be available in-game after the show begins. Stay tuned for more information.

Please note that in-game goodies associated with the Virtual Ticket can only be claimed on realms/servers in the following regions: the Americas (including those serving players in Latin America, Australia, New Zealand, and Southeast Asia), Europe, Russia, Taiwan, and Korea.

Will replays of Virtual Ticket content be available after BlizzCon is over?

Yes! Anyone with a Virtual Ticket will be able to access on-demand replays of the Main and Panel Stage streams for up to two weeks after the end of the event. Replays of the eSports events will also be available for free.

Will you be hosting a BlizzCon online merchandise sale this year for Virtual Ticket buyers? How will I access the sale?

Yes—we’re setting aside a stash of BlizzCon merchandise for BlizzCon attendees and Virtual Ticket holders to be sold in an online merchandise sale scheduled to take place October 17, 2014 through November 11, 2014.

After purchasing or redeeming a code for a Virtual Ticket, your Battle.net account will automatically be flagged to get access to the merchandise sale when it begins. Visit www.blizzcon.com closer to the sale for more information.

We’re also planning a post-BlizzCon sale that’s open to the public after show concludes—we’ll have more details to share at a later date. Please note that items purchased in all of these sales will be shipped from the U.S., so international shipping rates may apply.

How do I order the Virtual Ticket?

In what languages will the Virtual Ticket Internet stream be available?

The BlizzCon 2014 Virtual Ticket Internet stream and DIRECTV broadcast will be available in English only.

Free eSports streams will be available in multiple languages through a variety of external channels—visit www.blizzcon.com/tournaments/ closer to the show to find out if localized streaming eSports coverage is available in your preferred language.

In which regions is the Virtual Ticket available for purchase?

The BlizzCon Virtual Ticket is available in the Americas, Europe, Russia, Australia, New Zealand, Taiwan, and Southeast Asia (pricing and availability varies by region). Keep in mind the Virtual Ticket stream will be available only in English.

We’ll have more information on the system requirements and minimum bandwidth requirements to view the stream closer to the event.

Do I need to purchase a Virtual Ticket if I’ve already purchased a ticket to attend BlizzCon in person?

Note that the DIRECTV Pay Per View broadcast is not included with purchases of the Virtual Ticket made through the Battle.net Shop. More information on the DIRECTV BlizzCon 2014 Pay Per View event, including how to order through DIRECTV, will be available at a later date.

For those who choose the option to purchase the BlizzCon 2014 DIRECTV Pay Per View, the Virtual Ticket Internet stream will be included with your order. After ordering through DIRECTV, you will receive an email containing a code that will grant one Battle.net account access to the Virtual Ticket Internet stream, the BlizzCon 2014 in-game goodies, and online merchandise sale. You can redeem your code here at any time—just make sure to redeem the code using the Battle.net account on which you wish to receive the in-game goodies.