Witch Doctor builds, and comments from Wyatt Cheng on Patch 2.1.0 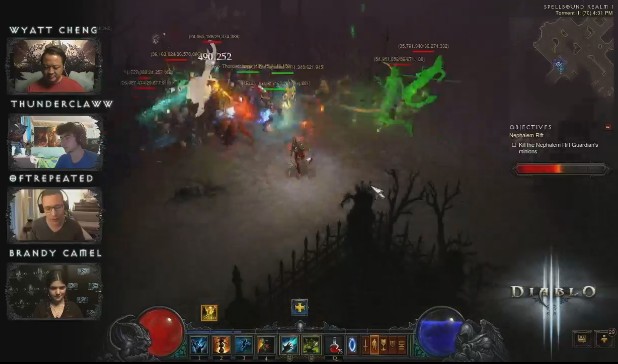 The second Diablo III Theorycraft Thursdays Livestream featured developer Wyatt Cheng, in a full group of Witch Doctors. They discussed builds based around the Carnevil Voodoo Mask for Witch Doctors, at length. Mr. Cheng also commented on topics such as what the developers are hoping to create for new Legendary rings, and upcoming skill changes on the Patch 2.1 PTR. Community Manager Lylirra covered the fast-moving Twitch chat during the livestream, providing extra details.

As mentioned in comments by Lylirra, this was technically the last Theorycraft Thursday event. The series will be renamed starting with the next round, to a more appropriate Play Your Way Thursday. Whatever the name, it's an enjoyable time of focus on builds for a specific class, and hearing from one of the Diablo III developers.

You can watch the VOD at Twitch, or in the YouTube video here.


Wyatt Cheng Livestream Discussion
Among the lengthy discussion of Witch Doctor builds, there were comments from Wyatt Cheng about a variety of Diablo III topics:

Lylirra Comments in Chat
Community Manager Lylirra was commenting in in the Twitch chat stream, gathering feedback and discussing concerns with the people there. Here are some of the direct text comments from her, with questions from chat members listed in italics.

That's all for the comments from this livestream. We look forward to seeing what builds are part of the next round, in the rebranded Play Your Way Thursday event.
Recent News
Diablo III: Ultimate Evil Edition
The console Diablo III edition includes all of the Reaper of Souls content, and special social features!
PlayStation 3