Plus fixes in patch 2.1, that buff weapons like Thunderfury and Maximus 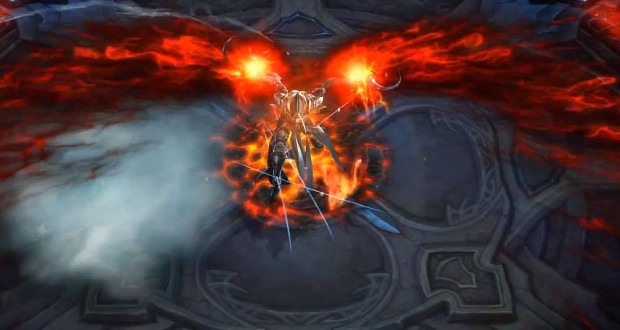 One change from Diablo III Patch 2.1 has made its way back to the live servers. A new hotfix reduces the amount of experience provided by the Malthael boss fight, since it was incorrectly too high. That is part of the Blizzard Blues posts, along with details on a bug fix in patch 2.1 that will boost the potential damage of many weapons. Here are all the latest blue posts.

Hotfix Reduces Experience on Malthael
A long-standing bug with Malthael providing double experience has been fixed on the live servers, via a hotfix. It had already been fixed in Patch 2.1 on the PTR.
Post by Blizzard (Blue Tracker, Official Forum)
Hotfixes have been updated with the following changes:

Patch 2.1 Fixes Items with Elemental Effects
In the comments for the Theorycraft Thursday Suckerfred1's "Lead Foot Lacerator" Barbarian build, Nevalistis provided information about weapons that have elemental effects. Not all of those weapons are currently gaining the damage increase that they should, from items with +%elemental bonuses. One example is the Lightning special attack on Thunderfury, Blessed Blade of the Windseeker, which currently is not boosted by +%Lightning elemental damage. All of those sort of items are being reviewed and fixed for patch 2.1, which should provide a nice damage increase for characters with that gear.
You do know that the Bul-KathosÂ´s Oath WW effect doesnÂ´t benefit from any elemental skill damage bonuses including Physical, right?
@Nubtro: Interesting. If that's the case, which was not the impression I was under, I'll make sure I have bring this point up. It's possible it's a bug, either way I'll look into it.

Thanks for the constructive feedback. Comments like this are helpful not only to myself and our developers, but budding theorycrafters and new players as well. :)

I'll address this quickly, but let's otherwise keep the focus on this build and Patch 2.0.6 rather than 2.1. The PTR just launched and this is just our first iteration (neither Seasons nor Legendary Gems are accessible yet). We're still hard at work on additional class changes, tweaks to Legendaries, and responding to player feedback. There's more to come, so please just be sure to let us know what you'd like to see in the PTR Feedback forum! Keeping your feedback in the appropriate place will allow us to gather and pass it on much more quickly and efficiently.


@Nubtro: Fun fact - after asking about this, I've discovered this is actually a bug and the Oath set *should* be benefitting from +% Physical damage - as should all other Legendaries with specific elemental effects, such as the Fulminator or Maximus.

We're doing a pass on these Legendaries and making sure they interact properly with bonus elemental damage. It's possible you'll see this fix on a future PTR build, so keep an eye out for it and let us know how it feels once you can give it a whirl (pun totally intended).

Ultimate Evil Edition Patches
The upcoming Diablo III: Ultimate Evil Edition will arrive on August 19 for the PS3, PS4, Xbox 360, and Xbox One consoles. It will ship with all the content up to Diablo III PC patch 2.0.5, and will likely be patched on the first day to the changes in patch 2.0.6. Any potential further console patches are still being planned out.
Post by Blizzard (Blue Tracker, Official Forum)
We're still working out all the details regarding if and how Ultimate Evil Edition will be supported post-launch (e.g. will we patch the game after it ships? if yes, should we only patch to fix bugs and address critical game issues, or should we patch in new content as well? at what frequency should we patch?), so we donâ€™t have an answer for you right now. That said, I can confirm that UEE will ship on all platforms with all updates included up to patch 2.0.5, and that there will likely be a â€œDay 1â€ patch to add in patch 2.0.6 content, too.

As we move closer to ship and finalize our post-launch patching plans, weâ€™ll be sure to keep you updated. Great question, though!

Read on for more posts, including details on stocking up on the materials for the Hellfire Amulets, which is coming in patch 2.1.

Stock Up for Making Hellfire Amulets in Patch 2.1
In the current design, the same materials that are used to craft Hellfire Rings will also be used in patch 2.1 to make the powerful new Hellfire Amulets. Players can go ahead now and stock up on those materials from the Infernal Machine bosses, to have a head-start at crafting the amulets once the patch lands.
Post by Blizzard (Blue Tracker, Official Forum)
Right now our plan is that crafting a Hellfire Amulet will require the same Demonic Organs that a Hellfire Ring currently does. Assuming nothing changes, then you could gather Demonic Organs right now, and save them to craft a Hellfire Amulet once patch 2.1 arrives.

Actually, I should probably start doing this, too. Of course, everyone should keep in mind that this is still in development, and potentially subject to change.

Greater Rift Fragment Drop Rates
Right now on the patch 2.1 PTR, the drop rate for the initial Greater Rift Fragment is not very high. That may be adjusted in future PTR builds, if the developers feel that players need to have a better chance of getting to Greater Rifts.
Post by Blizzard (Blue Tracker, Official Forum)
Posted by: Rollyy06/30/2014 02:23 PM

help would be appreciated.

It sounds like you're doing everything the right way, but have had a streak of bad luck. Rift Guardians have a chance to drop a Greater Rift Fragment, which is a physical item that will need to find a home in your inventory. So, if you don't have at least 1 free inventory square when it drops then you might accidentally leave it behind. They're kind of easy to miss in the midst of all the loot dropped by the Rift Guardian, too.

With all of that said I still want to point out that there are changes and fine tuning still in store for patch 2.1. We're keeping a close eye on things that are happening on the PTR, and we'll make adjustments as needed when things fall outside of design intent. So, for example, if Greater Rift Fragments are dropping less frequently than we'd like, then you can bet that we'll tweak the numbers until they are. Your feedback helps us with this process, so it's very much appreciated!

Maximum Stacks for Sacrifice - Provoke the Pack
The Witch Doctor skill Sacrifice was redesigned for patch 2.1, as detailed in the Patch 2.1.0 PTR Patch notes.. The buff from Sacrifice - Provoke the Pack was incorrectly listed in the PTR patch notes as going up to 10 stacks. It is actually designed to go up to 5 stacks, so the patch notes have been fixed to reflect that.
Post by Blizzard (Blue Tracker, Official Forum)
Great catch!

We've looked into this and discovered that this isn't actually a bug. The 10 stack limitation was from a previous internal build, and the change to 5 stacks prior to the PTR release and during the patch note process went missed. Apologies for the confusion, but Sacrifice (Provoke the Pack) is intended to stack up to 5.

As this is both the way the 2.1 PTR launched and the intended design (and essentially makes it a typo), I've updated the Patch Notes accordingly.

Thanks for the report!

Fix in 2.1 for Nvidia 700 Series FPS Drop
As previously detailed, there has been an ongoing problem with many Nvidia 700 series graphics cards. The cards have a serious FPS drop when running Diablo III. That should be fixed in patch 2.1.
Post by Blizzard (Blue Tracker, Official Forum)
GGgalf,

Have you tried the 2.1 PTR yet? I've seen reports that the fps issues with 700 series Nvidia cards seems to have been alleviated.

Is that while in a 4-player group or solo? I tried the bridge with my 780 and set the sound channels to the max 128 channel setting, which in the live game gives me trouble, but it seemed to be working fine on the PTR. This was solo though.

Our QA guys have done a lot of testing with 700 series card on 4-player games and have reported no issues in 2.1. It's possible though that the build they tested under is not the same as that released for the 2.1 PTR.