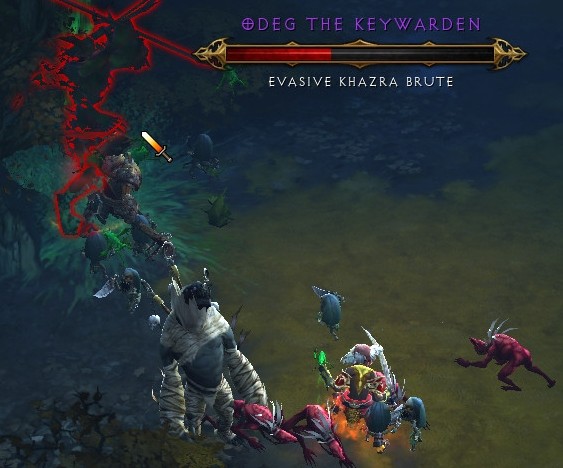 The pets in Diablo III can currently act brain-dead at times, standing around doing nothing while their master is fighting for her life. Many pets also have a tendency to charge off and attack some tiny monster elsewhere, instead of the big elite right in front of them. That will be changing in the upcoming Patch 2.1, as the pet AI will be vastly improved! This was one of the topics in the recent Blizzard Blues posts, along with discussions of Seasons and Tiered Rifts, and fixes coming in that major patch.

Patch 2.1 continues to be developed and is "coming... sort of like summer", according to a recent teasing tweet from Diablo III game director Josh Mosqueira. Here are the recent posts about the fixes and changes arriving in that patch!


AI Improvements for Pets
The discussion about pets standing around and not attacking started with a notice about improvements coming to the Barbarian skill Call of the Ancients. The fixes will improve the actions of many pets, across multiple classes. This should reduce the times when pets like the Witch Doctor Gargantuan stand around when they should be fighting, as seen above.
Post by Blizzard (Blue Tracker, Official Forum)
We’re planning to make several bug fixes to Call of the Ancients in patch 2.1 that should address some of the concerns we’ve seen players reporting with the skill. So, make sure you keep a hold of that Immortal Kings set!

Again, these bug fixes are currently expected to arrive with patch 2.1, but we don’t have an estimate to share for the date of that patch at this time. Thanks for all of the reports!
Posted by: DemonPowDuh06/03/2014 04:28 PM

I find that the idle thing happens often with WD pets too. Mostly the Zombie dog w/ tall mans finger and Gargantuan

I did some digging and found out that these changes will update multiple pets, and not just Call of the Ancients. I'll go over what those changes are, and what pets it should affect. I also want to emphasize that we don’t have an estimate to share for when we expect patch 2.1, but we’re definitely working on it and are looking to provide a PTR.


Seasonal Legendary Details
The Seasons and ladders coming in patch 2.1 will be a big change for the game, providing ongoing competition. Nevalistis discussed the Seasonal Legendaries that are planned for Seasons: the specific Legendary items that will start out as only available for Seasonal characters, and after that season will drop for all characters.
Post by Blizzard (Blue Tracker, Official Forum)
Posted by: AudioCG06/05/2014 10:50 AM

Its been a pain trying to link this info, as it has never been directly stated in a Blue post, so I totally understand why you had no idea. ;)

I suppose I can fix that. :P

Just to confirm our current plans with Seasons, as we've stated in earlier interviews/livestreams (though bear in mind that as with any current plans, this is subject to change):

To be very clear here, that means that we'll be able to find Seasonal Legendaries on regular (softcore/hardcore) characters after that season has expired, correct?

Not just that we'll be able to keep the Seasonal Legendaries we found during the season.
That too!

Leaderboard Competition Coming
The other part of the competition coming in patch 2.1 involves Leaderboards. They will be coming for both Seasonal characters and the characters who do Tiered Rifts (or Greater Rifts, as they're referred to here.)
Post by Blizzard (Blue Tracker, Official Forum)
This is a very nice thread and I would love to hear your feedback on such 'leaderboards'. Right now I can see some options there that seem like a summary of a 'Rift run' as well.
With Greater Rifts and Seasons slated for patch 2.1- it would be great if you could share how you feel about potential rivalry in Rifts with those features in place and how would you see the 'leaderboards concept' taking these 2 features into account.

Apart from Diablo ladders I have also played a lot of StarCraft II and even Brood War back in the days and personally cannot wait to see how seasons/ladders will work out in Diablo III - there is definitely great potential for fun there if competition is your thing!

We're happy to see that you like Rifts and are interested in ways to make them even more entertaining in a competitive way!

Haunt and Locust Swarm Item Boosts
There is a bug with items that are supposed to provide a damage percentage bonus to the Witch Doctor skills Haunt or Locust Swarm. The bonus is currently not being applied, so the damage from those skills does not increase. This bug is being worked on, and will likely be fixed in patch 2.1.
Post by Blizzard (Blue Tracker, Official Forum)
Hi Everyone,

Thanks for all of the reports about this. I just wanted to pop in here and let you all know that we are aware of this issue and have a potential fix in place internally that should resolve this. I obviously can't make any promises about when this fix may appear on live servers, but we are hoping to include it with our next game patch.

Thanks for your patience and all of the reports about this!

Rename for a Mask of Jeram
Witch Doctor helms are a bit confusing right now, because there are two entirely different items that are both called Mask of Jeram! The Legendary Mask of Jeram item is easily the most popular head item for Witch Doctors, as seen in our Best Witch Doctor Legendary & Set Helms charts. There is a much less popular Set Mask of Jeram item, that is part of a Witch Doctor class set. (Here at Diablo Somepage we temporarily flagged the Set version as (Legacy) in our charts, because our system isn't designed to deal with the possibility of two current items both having the exact same name.) Fortunately it appears that one of those helms will be renamed, likely in patch 2.1. That change will make our own item charts clearer, and many new Witch Doctors will no longer be confused when looking for equipment.
Post by Blizzard (Blue Tracker, Official Forum)
Reaper,

There are currently two items in the game with the name Mask of Jeram. One is a legendary while the other is a set item. They are not the same. I believe the devs are planning on changing one of the names in a future update but I'm not sure which will be changed or when that might be.

Hotfix for Public Game Matchmaking
A single new Patch 2.0.5 Hotfix went in recently, fixing an issue with matchmaking for Nephalem Rifts in public games.
Read on for more Blizzard Blues posts, including details about the bonuses for the upcoming console Ultimate Evil Edition of Diablo III.

Bonuses for Ultimate Evil Edition
Diablo III is expanding to four consoles with the Ultimate Evil Edition, arriving on August 19, 2014. Grimiku provided details about pre-order bonuses for that edition. They include the Infernal Pauldrons, and the Spectral Hound and Reaper of Souls-themed transmog plans that were previously in the higher end editions of the PC Diablo III expansion.
Post by Blizzard (Blue Tracker, Official Forum)
We agree that any details about possible console pre-order bonuses are good to share as early as possible, but we don't have any information to share about it just yet. But you can bet we'll be sure to let you know as soon as we're able!
I should clarify something about the Wings of Valor in particular while we’re on the subject, though. The Wings of Valor were a PC-exclusive pre-order item for Reaper of Souls (for players who picked up the expansion prior to a specific date), and will not be available to those who purchase Ultimate Evil Edition. However, I left out some important information about console pre-orders for Ultimate Evil Edition in my previous post, and I want to address that now. So, sorry about the hiccup!

As I noted earlier, though, there are still some bonus trinkets we have yet to reveal for Ultimate Evil Edition. I hear that E3 is next week; you may want to tune in. ;)
Wait, did you just mix up console and PC pre-order content? <_<"

A good question, but we didn't mix them up. :) The Spectral Hound and Reaper of Souls-themed transmog plans were included in the Reaper of Souls Digital Deluxe package, but were not exclusive pre-order items.

For Ultimate Evil Edition, these items will be offered as pre-order bonuses for all console platforms (in addition to the Infernal Pauldrons).
Posted by: Neese06/04/2014 05:29 AM

So potentially dumb question, these will only be available to the console, correct? So if I buy Ultimate Evil Edition for my PS3, I cannot use a code to get the xmog/item on the PC?

Correct, any pre-order bonuses you get from Ultimate Evil Edition will not transfer to PC version.

Fixes for Crash in Rifts
There is a long-standing issue involving crashes when entering Nephalem Rifts, especially on certain Mac computers. The last few patches contained code updates and fixes to help with it, and it sounds like patch 2.1 will have more changes. Since patch 2.1 will go through the PTR testing process, it is possible that the engineers will be able to get feedback and make further changes during the PTR.
Post by Blizzard (Blue Tracker, Official Forum)
Hey all,

Thank you for everyone who has been providing the crash logs to the email address and in this thread. Our Mac Engineers have been parsing through everything that's been submitted and are working toward another round of fixes in an upcoming build. As we get closer to a new resolution, we'll provide additional updates and check in to test it's successes. Thank you for hanging in there with us as we work together on a fix!

Chiltara Legendary Drops
Grimiku clarified the Legendary drops from Chiltara. The Legendary crafting materials that can drop from Chiltara do not compete with a drop of the Gibbering Gem item, that is needed for the Whimsyshire recipe; they are on separate drop tables.
Post by Blizzard (Blue Tracker, Official Forum)
Posted by: dar05/19/2014 04:48 AM

Yes chilltaras spawns more often,but because he also drops the crafting mat frozen blood,i think the drop rate for the gemstone is too low. Need to change so the that the same monster is not dropping two different unique items.

The Gibbering Gemstone does not compete with the Legendary crafting materials that Chiltara can drop, so finding a Frozen Blood (or an Urn of Quickening) won't keep you from having a chance at finding the stone.

No Magic Find for Crafting Materials
On a related topic, it was reiterated that the Magic Find item stat does not help at all with getting crafting materials.
Post by Blizzard (Blue Tracker, Official Forum)
Posted by: TAO03/31/2014 10:19 AM

But, what's happen when crafting materials, it's the same rate as Legendaries or have differences?

Magic Find does not influence crafting materials in any way. It is a good question, though, and a great thing to remind people about.

Be sure to keep up to date with the latest Blizzard Blues posts, in our Blue Post Tracker or the RSS feeds!
Recent News
Diablo III: Ultimate Evil Edition
The console Diablo III edition includes all of the Reaper of Souls content, and special social features!
PlayStation 3