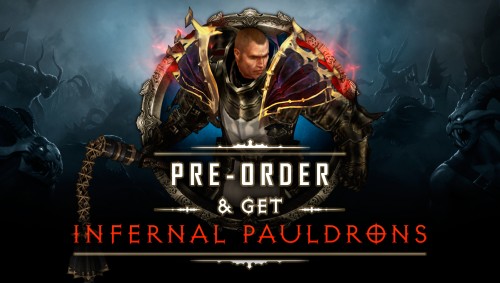 The next big release for Diablo III on the console is Diablo III: Ultimate Evil Edition. It arrives on August 19, 2014 and is now available on all four consoles for pre-order at Amazon.com. All pre-orders of the game will receive the in-game item Infernal Pauldrons, seen above.

The Ultimate Evil Edition includes the content from the Reaper of Souls Expansion, and the updates through PC Diablo III patch 2.0.4. It also includes special social features specific to the console version of Diablo III, action combat, co-op loot, and touch pad & light bar support. Any characters from the older standard version of Diablo III on the console will be able to transfer to the new edition: PS3 characters from the original game can transfer to either the PS3 or PS4 version of the Ultimate Evil Edition, and Xbox 360 characters can be transferred to the Xbox 360 or Xbox One version.
Recent News
Hot Topics