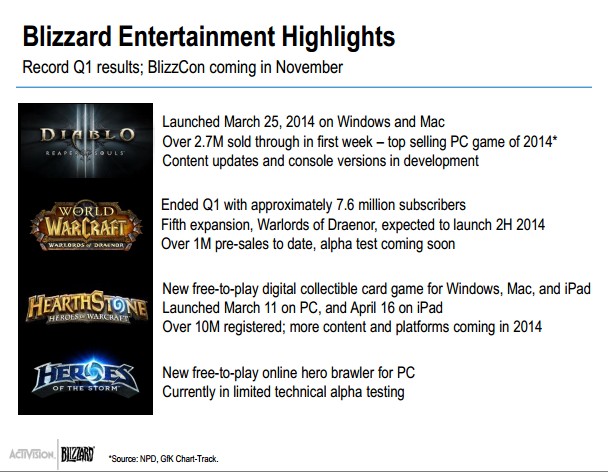 The Diablo III: Reaper of Souls expansion was the best-selling PC game in North America and Europe combined, for the first quarter of 2014. That was one of the announcements from Activision-Blizzard in the earnings call for Q1 2014, as part of a record-setting quarter. Blizzard Entertainment itself had record results, based on strong sales of the Diablo III expansion, better-than-expected Hearthstone card sales and World of Warcraft subscriptions. Here are details from the earnings report regarding Blizzard's games, and quotes from Blizzard CEO Mike Morhaime.


Diablo III
Morhaime: The Reaper of Souls launch was the definite highlight of Q1. The game sold through 2.7 million copies as of the first week alone making it the top-selling PC game of 2014 so far, based on the internal estimates and reports from key distribution partners.

The press reaction has been extremely positive and players are really enjoying the new contents and features, such as Adventure Mode, that enhances replayability. We attribute a lot of the game's access to a focused effort, on listening to player feedback and making improvements to the game based on that feedback. The result was a smooth global launch, as well as strong sales and ongoing engagement.

Looking ahead, we're already working on a content update that will add new features, like Tiered Rifts, where players can unlock increasingly more difficult dungeons for greater rewards. We also expect to launch the Diablo III: Ultimate Evil Edition, which will bring the Reaper of Souls content to console later this year.

World of Warcraft
Morhaime: On the World of Warcraft front, we ended Q1 at approximately 7.6 million subscribers, slightly below the prior quarter. We also began taking pre-sales for the next expansion, Warlords of Draenor. We have seen strong interest in the pre-sale offer with more than 1 million sold so far, and believe that the included character boost played a role in motivating players to make an early commitment to Warlords of Draenor.

Players who participated in the pre-sale were granted immediate access to a character boost to level 90, which is part of the Warlords of Draenor package. Character boosts are also available as a separate service. The boost make it easier for players to return to the game and rejoin their friends, or to just try out a new class. We believe that Warlords of Draenor offers a compelling package for players.

The story takes Warcraft back to the setting of some of the original games, and reintroduces classic heroes and villains. Warlords of Draenor also includes the innovative new Garrisons feature, which allows players to further customize their experience in the game. Each player’s garrison acts as a home base, that allows players to leave a personal footprint in the world, tailored to their taste and gameplay preferences. Overall, we're pleased with the ongoing stability in the player base, but look ahead cautiously given the seasonality and a late-expansion cycle dynamics. We expect to launch Warlords of Draenor in the back half of the year. 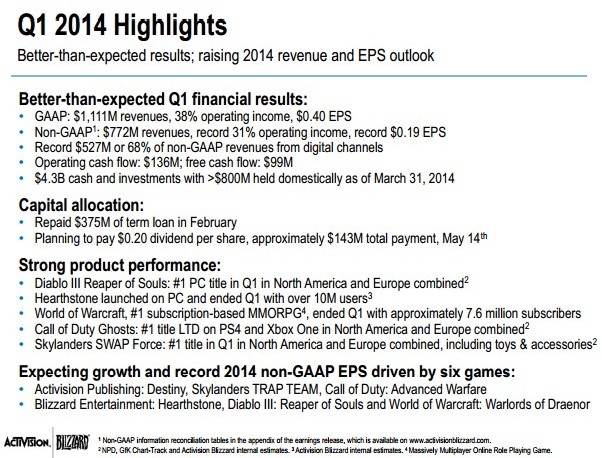 Hearthstone
Morhaime: Hearthstone officially launched on Windows and Mac on March 11 and is currently one of the top-rated iPad and PC games of 2014 on Metacritic.

At the time we launched on PC, more than 10 million players had already tried Hearthstone. More have joined since we launched the iPad version a few weeks later, and the game quickly climbed to the top of the free app chart in dozens of countries. While it is still too early to talk specifics about the impact of the iPad release, we are very pleased at the response we received and are excited to expand Blizzard's reach to the iPad.

We were also proud of the fact that Hearthstone offers a seamless cross-platform experience. Your progress, collection, and friend list remain the same across all platforms, allowing players to enjoy the game easily on both PC and iPad. Hearthstone's pace and design make it ideally suited for the tablet format. Matches are quick, generally around 10 minutes, and the concepts are easy to grasp for newcomers, while maintaining enough depth for long-term competitive play.

Looking ahead for Hearthstone, we plan to release a new single-player adventure called The Curse of Naxxramas this summer. This content is based on a popular raid dungeon in World of Warcraft. Players will be able to face off against card versions of classic boxes from the dungeon and unlock new cards. The Naxxramas content will be released over several weeks. To celebrate the launch, the first set of content will be free for a limited time, while the subsequent ones will be unlockable through in-game gold or real money. We're thrilled to bring the first new piece of new content out for Hearthstone this summer and look forward to creating more content for this growing community.


Q&A
Christopher Merwin (Barclays Capital): So it looks like you have had a lot of early success with Hearthstone. I think you reported about 10 million users. And now that that game has been launched on iPad, can you quantify at all for us what type of uptick you have seen in users so far; and how those iPad users have been converting any better than the desktop ones? And then lastly, just in terms of monetization for the game, is it possible to share what type of payer rates you are seeing for Hearthstone as compared to the typical mid-core mobile game?

Morhaime: Well we're not ready to discuss specific impact on the total player base or specifics around monetization yet. I can say that it's monetizing very well compared to other free-to-play games, at least from what I've seen. One thing to point out, since it is a cross-platform game and we have users that joined us on multiple platforms, you are seeing players that joined on the PC purchasing both on the PC and the iPad and vice versa. And so the way that we look at the eco-system there is as really one playerbase that has the ability to play on multiple platforms. And we think that judging by the rapid rise of the download popularity on the iPad charts, and the positive reviews that we've been getting, we're very pleased.


Arvind Bhatia (Sterne Agee & Leach Inc.): I know a bunch of questions on Hearthstone have been asked, but could you help us maybe size the market and the audience size from your perspective?

Morhaime: For sizing market size opportunity for Hearthstone: I think it's very difficult to project something like that. Certainly giving the accessibility and depth of the game, we certainly believe that there's a lot of potential. Also, when you consider that we still have the Android platforms and the iPhone to expand to, we see that as a big opportunity as well. We're continuing to build on the game experience, listening to player feedback and adding new content. So we are really excited about the upcoming release of Curse of Naxxramas.

Heroes of the Storm
Morhaime: Rounding out a busy quarter for us, we began a technical alpha test for our upcoming team brawler, Heroes of the Storm. Heroes will be our second free-to-play game, giving our spin on a very popular game genre. Players can choose from dozens of iconic Blizzard characters, team up with friends and take on other teams in competitive online matches. The technical alpha currently includes U.S. players and select global press and community influencers.

Early feedback has been very positive, with many media talking about Heroes' unique gameplay design, which is tailored to be more welcoming for newcomers to the genre. That fresh take on gameplay, combined with the appeal of Blizzard's popular characters, has generated a lot of interest in the game.

At a recent showing at PAX East, players waited up to 2 hours to try the game and came away with very good impressions. We are steadily adding more content and features over the course of testing, and we look forward to expanding the test audience globally in the coming months. In addition, our partners at NetEase and Asiasoft have announced that they are working with us to bring the game to China and Southeast Asia, respectively.


Q&A
Michael Hickey (The Benchmark Company): Mike, just give us some details on Heroes of the Storm. I know it's early days here, I'm not sure how much more you can share. But I was hoping you could just, if possible, kind of size the market opportunity as it relates to the game category, or maybe the Blizzard audience. I mean, you've got 10 million PC players almost immediately for Hearthstone. Is that kind of an initial reasonable range you think for Heroes of the Storm, or is it unique that maybe it doesn't appeal to the same playerbase? And then maybe this is way too early, but maybe monetization of the game and also as it relates or I guess compares to what you saw from Hearthstone?

Morhaime: Currently, we are in a very limited technical alpha testing to test the infrastructure around the game and all the technical issues surrounding the game. It's also giving us the opportunity to test some of the game design innovations that we have been creating, and the response has been very positive.

The game is already very fun. We are getting really good feedback from the people that are currently helping us test it. We are looking forward to expanding the size of our test audience in the future. In terms of the opportunity, it is a proven genre. I mean, you can see that some of the existing games in the genre have achieved a very high level of success.

We think that there is an opportunity to make the genre even more approachable for new players. I think that it can skew very hardcore, and there is definitely room for improvement in that area, while still maintaining the depth and replayability that exist there. In terms of monetization, we are still experimenting with monetization, but it will be free-to-play. We will have micro-transactions and we will have more information about the offerings that we will provide in the future.

Another record-setting quarter by Blizzard helped propel the overall corporation, through the start of 2014. As noted by Morhaime, with Hearthstone released and Heroes of the Storm underway, Blizzard will eventually have five active games. That gives Blizzard a broad base to build on, for upcoming years of game development.
Recent News
Diablo III: Ultimate Evil Edition
The console Diablo III edition includes all of the Reaper of Souls content, and special social features!
PlayStation 3