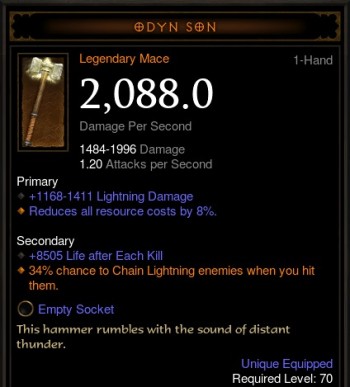 The upcoming Diablo III patch 2.0.5 will bring many changes to the game, along with fixes to numerous bugs. One strange bug with Legendary items will be fixed there, or potentially a future patch. It involves certain Legendary items that are not rolling all their stats for specific classes. The latest Blizzard Blues posts provided details on these issues and recent Hotfixes.

All of the changes that have been publicly discussed for upcoming patches, including Patch 2.0.5 and the big content Patch 2.1, can be seen in the Future Patches guide.

Missing Stats on Legendaries
The bug involving Legendary items was reported from a Witch Doctor who got a bugged version of the Legendary mace Odyn Son, as seen above. Level 70 versions of the mace should always have the property Lightning skills deal 15% more damage, in the 15-20% range. The bug is that that item property does not roll, if the mace drops for a Witch Doctor. There may be other stats that are not rolling properly on certain Legendary or Set items, when those items drop for a specific class. The issue will be fixed in an upcoming patch, probably patch 2.0.5.
Post by Blizzard (Blue Tracker, Official Forum)
Entropy,

It looks like the item is bugged in that if it tries to do a smart roll for the Witch Doctor class, it won't get the +elemental damage. It will be resolved in an upcoming patch but we haven't got an ETA as to when that might be.

Delay in Item Drop Display
Another bug that will be fixed in an upcoming patch is when items don't show up immediately when they drop. It can take up to a few seconds, for an item to show on the ground; the Diablo III client will have to be updated with a patch to fix that issue.
Post by Blizzard (Blue Tracker, Official Forum)
Narmor,

I see it too occasionally though it's at most a 2 second delay for me and only happens to items, never gems or crafting mats.

It's an issue that's been investigated for a while now I'm afraid. I believe they might have a fix in the works but it's going to come in a future patch, not a hotfix. As there's no ETA for the patch, we'll have to wait.

Lut Socks from Any Difficulty
As mentioned earlier, the Lut Socks legendary boots are able to be obtained in any difficulty. Community manager Nevalistis pointed out the change, as she fixed her earlier list of Legendary and Set that only drop in Torment difficulties.
Post by Blizzard (Blue Tracker, Official Forum)
Posted by: Ysuran04/27/2014 01:48 AM

Just to make sure Nevalistis didn't forget about us... *knock knock* Neva :D Are you there? :D

I haven't! There were just a boatload of tests and retests to run, and those take quite a bit of time (especially in between QA and Development's regular tasks). I was also out sick a little earlier this week, but I'm now back and healthy. <3

I was able to verify that Lut Socks are not considered Torment-Only Legendaries, and I've removed them from the original post as a result. Thanks to everyone for reporting it! It looks like this was some very old information from when Lut Socks were an "unofficial" part of the Might of the Earth set, and it carried over sneakily into the document I wound up referencing. My apologies for any confusion!

However, the rest of that list should be accurate. I've had it checked, double checked, and triple checked. We've tested until we're blue in the face (pun totally intended), and we've been unable to replicate generating the items on this list from Kadala. It's possible some of the items being reported came from another source. Should you come across an anomaly, I suppose you should consider buying flowers for Kadala for her kindness. ;P As for now, we cannot verify that there's any bug going on with her loot table or the items she's generating.

Hotfixes for Experience Exploits
A couple of hotfixes went live this week. They both fixed some easily killed creatures, so those monsters can't be endlessly killed without any danger, for experience or drops.
Post by Blizzard (Blue Tracker, Official Forum)

Keep up to date with the latest Blizzard Blues posts, in our Blue Post Tracker or the RSS feeds.
Recent News
Diablo III: Ultimate Evil Edition
The console Diablo III edition includes all of the Reaper of Souls content, and special social features!
PlayStation 3