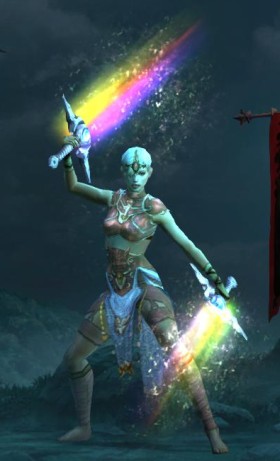 The set bonuses that went in with Diablo III patch 2.0 can provide powerful boosts, rewarding players for obtaining many pieces of a specific set. There are a couple of class set bonuses that aren't functioning properly, which players have found once they obtained all the required items. The new Monk Inna's set, and the level 70 Wizard Vyr's set, both have fixes coming for their 4-piece set bonus. Those are some of the fixes being worked on that will likely be included in the upcoming patch 2.0.5, as detailed by recent Blizzard Blues posts.

All the changes expected in Patch 2.0.5, as well as the big content patch 2.1, can be seen in our Future Patches guide.

Fix for Inna's and Vyr's 4-piece Set Bonuses
The level 70 Wizard set Vyr's Amazing Arcana, with items such as Vyr’s Astonishing Aura, has the 4-piece set bonus of Archon gains the effect of every rune. Right now, all the Archon runes are not being activated when using the full armor set. The new Monk set Inna's Mantra also provides a similar boost. Items such as the new set legs Inna's Temperance grant a 4-piece set bonus of Gain the base effect of all four Mantras at all times. That bonus is also not fully functional, and does not provide the buff of all the Monk Mantras. An upcoming patch (probably patch 2.0.5) will include fixes for both of these set bonuses, so they will work properly.
Post by Blizzard (Blue Tracker, Official Forum)
Hi Everyone,

I just wanted to pop in here real quick and let everyone know that we currently have a few potential fixes in place internally that should resolve the problems that you guys are seeing with the Inna's and Vyr's four-piece set bonuses. As of right now, these changes are slated to make it to live servers in an upcoming game patch. I can't give any specific dates or an ETA on when this patch may arrive, but this is definitely something we are actively working on and hope to have ready for you guys soon.

Thanks again for all of your patience and understanding, and most of all thanks for all of the reports!

Spectrum Sword Drop Fix
The Legendary sword Spectrum is a rare drop from Whimsyshire. It has a unique appearance that can be used for Transmogrifying weapons to make a rainbow glow, as seen above. The sword is more difficult to obtain right now than it should be, because it's not dropping from all of the intended monsters in Whimsyshire. That will be fixed in the future, so it drops from all the creatures it should.
Post by Blizzard (Blue Tracker, Official Forum)
This isn't the first time I've seen players wondering if Spectrum is still in the game or not, so I did a little digging to find out. Spectrum is in the game still, but it is pretty rare. There is a bug with one of the unique monster not dropping it at all (I believe it's Super Awesome Sparkle Cake), but that will be addressed in the future. Good luck to all of you looking for it, though!

Chiltara Spawn to be Fixed
Getting into Whimsyshire involves crafting the Staff of Herding, which involves obtaining 4 different Legendary materials. The Gibbering Gemstone is the hardest one of those to obtain, and comes from Chiltara in the Caverns of Frost. Since patch 2.0 the chance of Chiltara spawning in the caves has been very low, making it difficult to obtain the gemstone. This will be fixed in an upcoming patch, so Chiltara will pop up a bit more often.
Post by Blizzard (Blue Tracker, Official Forum)
Hey, everyone!

I have some good news about Chiltara for those of you who've had a tough time finding her as of late. In a future patch, we’re going to increase the chance that she’ll spawn in the Caverns of Frost. Our intention with this change is to make it a bit easier for players to construct a Staff of Herding, but still keep the Gibbering Gemstone as the most difficult component to find: http://us.battle.net/d3/en/forum/topic/11883998315#2

Note that this change will only increase her spawn chance. The drop rates for the Gibbering Gemstone itself (as well as the Urn of Quickening, and Frozen Blood) will remain the same.

A Prisoner's Journal Not Dropping
The lore book A Prisoner's Journal is part of multiple achievements, but the book has not been dropping. This was thought to have been fixed in patch 2.0.4, but it didn't make that patch. It is still being looked at, to be fixed.

Lut Socks Available from Kadala
A clarification was made on the list of Legendaries not from Kadala. That list was updated, to reflect that the Lut Socks legendary boots can be obtained from gambling with Blood Shards. This is good news for Barbarians, since they love using those boots to Leap all around. They make our list of the top 5 Most Popular Barbarian Boots.

Thinking About Ladders
The Diablo III developer work continues on Seasons and Ladders, which is scheduled to arrive in the major content patch 2.1. Grimiku put up some questions about what players are expecting and thinking about, for the Season system.
Post by Blizzard (Blue Tracker, Official Forum)
There have been a lot recent posts about seasons, and a lot of opinions and concerns about them. We're very happy that so many of you have taken an interest in this upcoming feature, and we're looking forward to sharing more information on them in the future. It’s always awesome to see a great community discussion on a subject like this, so I wanted to drop in and ask a few questions.

Based on the information currently available:


Character Drops Not Fixed at Creation
In any game like Diablo III that relies heavily on random drops, some players will come up with wild theories about how the drops work. One such theory making the rounds lately, is that the Legendary drops that a character can get, are somehow based on when the character was created. Lylirra provided a post to dispel that notion, and detail a bit about how drops are generated.
Post by Blizzard (Blue Tracker, Official Forum)
Hey all!

For clarity, items and their stats are determined at the time that they're generated in the game world. In most situations, this is when the item physically drops (like from a monster, a chest, or a destructible). In cases where there isn't a physical drop, items and their stats are determined as soon the game creates them. For example, items from Kadala are generated as soon as they're purchased. Item types, stats, drops rates, etc. are not determined, or pre-determined, upon creation of a character nor is that kind of information stored in some sort of seed on the character itself.

It's important to keep in mind that random != uniform or equal distribution. It's completely natural for random systems to included clusters, and for the human brain to interpret those clusters as patterns (even where there are none).

Thanks for the discussion, though! Theories like this are always interesting, and of course can yield great feedback on and insight into potential related issues. :) I’m going to go ahead and lock this thread up, though, since the theory isn't actually accurate and I'd like to help curb some of the misinformation.

In parting, for your trouble, I'll leave you with this: https://www.youtube.com/watch?v=NbInZ5oJ0bc