Diablo IIINewsBuff for Damage on Legendary Sources and Mojos

Buff for Damage on Legendary Sources and Mojos 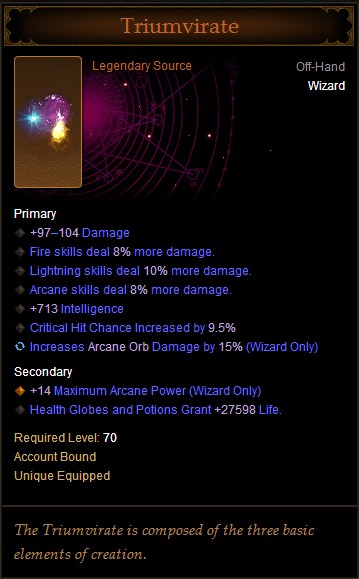 Now that the Reaper of Souls expansion has been out for nearly a month, there is a lot of data for the Diablo III developers to review. They are using that to plan changes in skills for future patches of the game. Another change planned is a buff to the damage of the Witch Doctor Mojos and Wizard Sources, such as the Triumvirate Source shown above. The latest Blizzard Blues posts detail these upcoming changes.

Damage Buff for Legendary Mojos and Sources
Lylirra provided a detailed explanation of what already happened in patch 2.0.4 for the Legendary items of Wizard Sources and Witch Doctor Mojo holdable items. There are more changes coming, with a boost in their base damage scheduled to arrive in a future patch.
Post by Blizzard (Blue Tracker, Official Forum)
Hey everyone!

First off, apologies for the delay on this follow-up and thank you very much for your patience. We've looked into your reports with QA and the dev thoroughly and here's what happened:

The issue is actually two-fold:

While crafted Legendary Sources and Mojos are now using the correct values (both newly rolled and existing), this particular fix came a little sooner than we anticipated which means we didn't get to post about it advance. We sincerely apologize for not providing messaging ahead of time on this topic as well as for any inconvenience or negative effect that lack of messaging may have had on your gameplay experience. This applies especially to anyone who had an existing item affected by the fix itself.

In the near future, we'd like to address the second issue, which is that Legendary Sources and Mojos (both dropped and crafted) are not being appropriately up-ranked to have more powerful base Damage than Rare ones. Since any change made to address this issue would affect client-side data, it's not something we can hotfix; BUT, we are looking to implement a fix in an upcoming patch. We're still working out the specific details (including an ETA), but suffice to say that crafted/dropped Legendary Sources and Mojos should be more powerful than they were even prior to patch 2.0.4 once issue #2 is resolved.

Blade of Prophecy Working Properly
There has been a lot of discussion about the Legendary two-handed sword Blade of Prophecy, which has the specific power All Condemned enemies also trigger Condemn's explosion. There were questions about how that power was supposed to work with the Crusader Condemn skill, and how often the affect should go off. Lylirra checked into that with the developers, and provided info on how the sword is working. The sword's description doesn't accurately describe exactly how the sword works, so that will be updated in a future patch.
Post by Blizzard (Blue Tracker, Official Forum)
Alright, folks. Here's the follow up:


Just as an FYI, I've already passed along the feedback regarding BoP's tooltip and the relevant secondary affix being somewhat misleading/confusing. :)
Posted by: Rolly04/21/2014 02:32 PM

Looks at tooltip, looks at this statement.

Big explosions in brain at the cognitive dissonance.

When I passed along the feedback from earlier posts in this thread to the dev team, they'd agreed with the posts that the description is confusing and not really representative of the behavior of the proc, so it's something they'd like to fix and just make much more clear to players. Since it's a text change (and therefore hitting client side data), it's not something we can hotfix, but we are looking to tackle with a future patch.

Skills Tuning Pass in Future Patch
Another post in that thread provided more info about an upcoming tuning pass to skills. We have seen a lot of changes to skills in the minor patches and hotfixes since the initial major Patch 2.0, but those were just the start. The developers are reviewing the data of how players are using skills, and will be adjusting some of them in a future patch. Presumably this will boost the usability of some of the skills that rank poorly in our charts of Most Popular Skills and Builds.
Post by Blizzard (Blue Tracker, Official Forum)
Posted by: Zbik04/20/2014 04:04 PM

please Lylirra , please for the love of everything thats holy pass along a message stating how much of a horrific state whirlwind for barbarians is , lightning just cannot do any damage

Happy to pass on the feedback, but pretty sure Nevalistis already beat me to it. I know she documented quite a bit of feedback from the discussion she was keeping an eye on here: http://us.battle.net/d3/en/forum/topic/12506571517?page=9#178

The whole reason for the uproar about this (and as per your response I know you didnt glean this) is because the proc coefficients on abilities such as Whirlwind (13% coeff), which also does laughable damage by itself, don't permit build diversity because you actually get more AoE damage from skills//procs by using Single Target abilities that have nearly 100% proc coefficients.

We haven't yet completed a full tuning pass after the launch of Reaper of Souls. While we started with a few changes to some generators and single-target skills with the 2.0.4 patch, that doesn't mean we're done with evaluating all the classes and their skills.

While I don't have exact details to share at this moment, tuning and balancing is something always being discussed amongst our developers. I'm certainly happy to carry back feedback on skills that you (or others) feel need another look, but that would be a separate case entirely from the bug fixes for Shard of Hate. A bugged weapon shouldn't be a solution to an issue with a skill - if Whirlwind or other skills need to be re-evaluated, then that should be a separate (if related) discussion, and I can certainly pass that on!

Note that the tuning pass she's referencing refers to the reevaluation we always do after a game is launched (or a big patch has been released). We do a tuning pass before we ship and then after; this post-ship pass is to account for the wider net of data we get once the game has been played by a larger audience of players.

Skill Element Changes Coming
In a thread that initially dealt with Whirlwind, Nevalistis also talked about elemental damage types throughout the class skills. Those are not very evenly distributed right now, and some classes find it hard to make builds based around a specific elemental damage type. That will also be reviewed, and some skills (and likely runes) will be updated to provide a different elemental damage type.
Post by Blizzard (Blue Tracker, Official Forum)
Some of these tests can be misleading in that they often create an environment attempting to compare each skill point-for-point when not all skills are designed to perform equally under the same circumstances.

Using Whirlwind as your exclusive damage dealer on Ghom is going to have lower performance when compared to something like Ancient Spear because it's designed to hit multiple targets. Whirlwind is the type of skill that performs exponentially better the more targets it's able to hit, and less well on single targets. Ancient Spear, on the other hand, is tuned the other way around (better at single target, less than ideal at multi-target) as it's (generally) a single-target skill.

Damage is not the only factor of a skill that's weighed when we're considering balance. The proc coefficient, the average number of targets a skill usually hits, the amount of player skill involved to capitalize on an ability's powers, and whether or not that skill provides any additional utility bonuses are some of the other parts of that equation. While some of that is quantifiable data, other details are a bit harder to measure in raw numbers. That's part of what makes the act of balancing so tricky.

We want to make sure each skill is serving its design intent and feels good when utilized in those environments. Single-target skills will generally excel the most when you're fighting bosses, when AoE skills will feel more powerful among packs of beasties. We think that Whirlwind, when used in the latter situation, feels pretty good right now, and even more so when geared up with items that synergize well with its strengths.

We're keeping an ever-vigilant eye on player feedback and our own data, and as these concerns pop up, those of us on the Community team will continue to do our best to let you know what the thoughts are behind these design decisions. :)
Posted by: soci04/21/2014 01:12 PM

WW is not imo a huge issue but the fact that lightning/cold/non-fire builds all perform poorly and aren't really good compared with fire.

This is actually a topic I've been meaning to post on for a while, but hadn't found a good opportunity yet. Now's as good a time as any, I suppose!

When we did a pass on elemental damage types across skills during the Closed Beta for Reaper of Souls, the Barbarian class was one that received the most revision. While we arrived at a place much closer to where we were aiming, we think there's room for some additional adjustments. I don't have details on exact changes to share at this time, but it's likely you'll see some skills, and not just for the Barbarian, shift around their elemental type in a future patch.

Keep track of the current Reaper of Souls news with the latest Blizzard Blues posts in our Blue Post Tracker or the RSS feeds.
Recent News
Diablo III: Ultimate Evil Edition
The console Diablo III edition includes all of the Reaper of Souls content, and special social features!
PlayStation 3