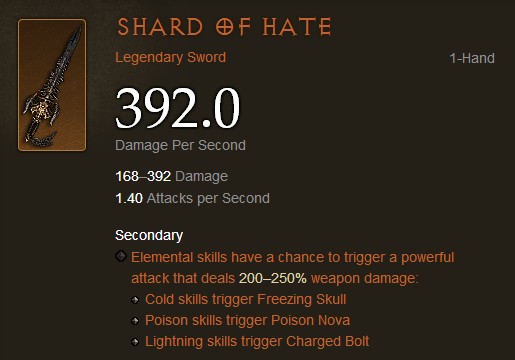 The Legendary sword Shard of Hate was added in patch 2.0, and has a powerful attack that can activate from elemental skills. The sword's special ability has been too powerful so far, especially for certain specs like the Barbarian Whirlwind builds, doing far more damage than could be achieved with other weapons. The Diablo III team has found two bugs that are being taken care of with hotfixes, that made the weapon do more damage than was intended. That is detailed in one of the recent Blizzard Blues posts, so let's delve into them!

Patch 2.0.4 Hotfixes
The latest hotfixes detail the changes coming to the Shard of Hate, which are still listed as Upcoming Changes, at the moment. Other changes that already went in include a couple skill fixes.
Post by Blizzard (Blue Tracker, Official Forum)
[UPCOMING HOTFIXES]


Shard of Hate Hotfix Details
A more detailed explanation was provided for the fixes coming to the Shard of Hate legendary. This weapon has been extraordinarily powerful for certain classes and builds. Even with the rarity of the weapon, it has already climbed into the top 5 of our charts displaying the Most Popular Barbarian One-Handed Weapons, among the top 25% of Barbarians by elite kills.
Post by Blizzard (Blue Tracker, Official Forum)
As with other recent hotfixes, weâ€™ve got one coming up shortly that we wanted to give the community a heads up about, this time regarding the legendary Shard of Hate. Weâ€™ve been closely observing our internal reports as well as player feedback on the Shard of Hate and the general consensus is that this item feels wildly out of line compared to other items. After digging in behind the scenes, we discovered a couple of bugs with this item that we believe is the ultimate culprit.

Secondly, the proc rate of the item was ignoring the proc scalar of the skill it was used with, which in simple terms caused Shard of Hateâ€™s affix to apply every time a skill was used. Combined with the above issue, this resulted in this Legendary vastly over performing, and even more so with particular builds.

The hotfixes weâ€™re applying correct both of these unintended behaviors and have been added to our 2.0.4 Hotfixes thread. As with all major changes, we hope to provide insight as to why we felt these changes were necessary as well as give context to the decisions we ultimately make.

Horadric Cache and Difficulty Levels
Grimiku jumped into a discussion about the Horadric Cache rewards from Bounties, and how those rewards relate to the Dynamic Difficulty levels.
Post by Blizzard (Blue Tracker, Official Forum)
Posted by: commiedic04/14/2014 02:34 PM

I run bounties on Normal just to burn through them as quick as possible, but I can burn through T1 almost just as fast. Should I be doing them on T1 for a higher percentage drop rate from the caches or should I just keep doing them on normal?

The loot from a Horadric Cache won't change based on the difficulty, but Torment 1 does offer incentives (like an increased drop rate, gold and experience) that help while you're earning a cache. If what you want is to get as many Horadric Caches as possible then a lower difficulty might be optimal, though, since all of the benefits for increasing the difficulty to Torment 1 exist outside of the cache specific loot.
Posted by: Flood04/14/2014 04:23 PM

Sorry, just wanted to clarify something. You're very clear about the loot in the cache not changing based on the difficulty. I take that to mean that the loot table does not change.

However, does the "chance" that you'll get a legendary from that fixed loot table increase with each torment level?

For example. Am I just as likely to get a Ring of Royal Grandeur (a cache specific item) from a T1 cache as I am from a T6 cache?

That's a great observation, but more of an oversight on my part rather than precise, selective messaging. The chance to get a Legendary item from a Horadric Cache does not change based on the difficulty you acquired the cache. To use the example provided you'd have the same chance to get the Ring of Royal Grandeur from a cache acquired in Torment 1 as one acquired in Torment 6.

Set Items from Kadala
The gambling for items with Blood Shards can occasionally reward a powerful Legendary item. The items that can be obtained through gambling are limited, though. Some of the items that are not obtainable from Kadala, include the class-specific set items. (More generic sets with items like Blackthorne's Surcoat can be obtained through gambling.)
Post by Blizzard (Blue Tracker, Official Forum)
I dug around a little to see if I could find a bug or something, but it's looking like everything is working as intended. It's not currently possible to get a piece of Tal Rasha's (or Firebird's) set from Kadala. We're always interested in finding out if there's a bug, though, so feel free to let us know if you did find an item on Kadala that she shouldn't have. As a reminder (or in case you're wondering) Kadala should not be able to offer any items that are restricted to Horadric Caches or Torment difficulty.

Items Higher than Character Level
In multiplayer games, items drop based on the level of the party leader, as of right now. So a lower level character getting power leveled by a much higher level character, may end up with higher level gear than they can immediately use.
Post by Blizzard (Blue Tracker, Official Forum)
Posted by: Jeremy04/15/2014 01:28 PM

The game session has a level. When you look above the minimap it says something like "Torment I (70)" The (70) indicates the level of the game. Drops are based on that number, and it is tied to the level of the Party Guide.

So you're saying if it says 70, while I'm still lvl 1, it is intended that I can get lvl 70 gears? that's mainly my question.

Yep, that's the way it's currently intended to work! A level 1 character will get level 70 gear if they've joined a game made by a 70. This might be something that we take another look at later on down the road, but it's hard to tell at this point. As a side note, there are a lot of level reduced items, so be sure to keep an eye out for them whenever you join your higher level friends game. You just might find an upgrade sooner than you think!

Keywarden Spawns
The Keywardens that drop the keys and recipe for the Hellfire Ring are supposed to only spawn on Torment difficulties, but there is a bug where they can spawn at lower difficulties as well. Be careful out there, especially on hardcore!
Post by Blizzard (Blue Tracker, Official Forum)
Key Wardens are only supposed to appear in games set to Torment difficulty, since that's when they start having a chance to drop a key. However, there is a bug that allows them to sometimes show up in games set on a lower difficulty than Torment 1, but it's not meant to work that way.

Closing Nephalem Rifts
There is a big discussion on the forums, about the etiquette of closing Nephalem Rifts. The game closes the Rift automatically shortly after any character in the party completes the event in town, and some players feel like that is a problem.
Post by Blizzard (Blue Tracker, Official Forum)
Just wanted to jump in say thanks for this discussion! I've already passed it along to our devs.

I've got a few follow-up questions, though. If you'll humor me. :)

Question #1: After killing a Rift Boss, do you prefer:


Question #2: In your opinion, what do you feel would be a happy medium between the two different playstyles (clearing Rifts vs. not clearing Rifts)?

Question #3: Why does having a Rift closed in a group before you have a chance to clear it (if you prefer that option) bother you or frustrate you? From a personal perspective, how does it negatively affect your gameplay? (Or does it even affect you?)