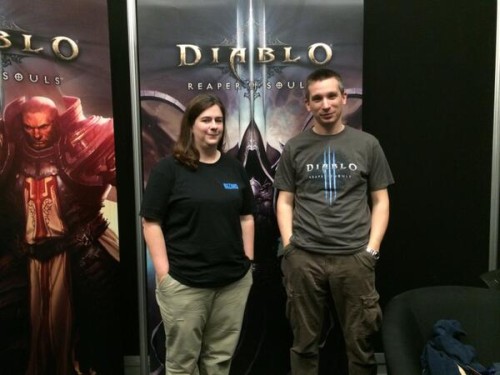 The console group of the Diablo III team has been hard at work on Diablo III: Ultimate Evil Edition for the PlayStation 4. This past weekend at PAX East 2014 in Boston, they showed off the PS4 version of the game, and detailed new features that aren't in any other edition of the game. These include social features with item trading via a mail system, a side-kick Apprentice Mode, and other interesting ideas.

Diablo III console senior producer Julia Humphreys and senior level designer Matthew Berger, seen above, talked about the development of Diablo III on the next-generation console. In a video with GameSpot they showed off the game in 1080p resolution at 60fps.

Here's a list of the features discussed in the video, for Diablo III on the PS4.

Diablo III: Ultimate Evil Edition is scheduled to be released sometime in 2014. Any characters from the previous PlayStation 3 edition of the game can be transferred and upgraded into the PS4 edition. Blizzard also has Diablo III in Development for the Xbox One, but they have yet to announce if or when the game will be released for that console.
Recent News
Diablo III: Ultimate Evil Edition
The console Diablo III edition includes all of the Reaper of Souls content, and special social features!
PlayStation 3