Undocumented changes in the new patch include higher pet damage 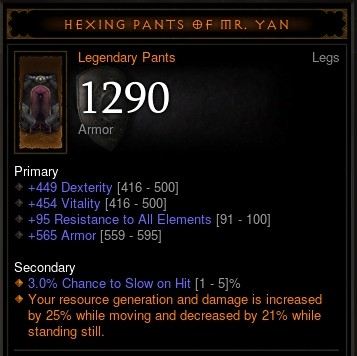 The arrival of patch 2.0.4 brought changes both big and small to Diablo III. The Diablo III Patch 2.0.4 Patch Notes and Hotfixes info has the official list of changes, but there were many other additions and tweaks that didn't get listed in the initial patch notes. These include new Paragon Level portraits, certain Legendary items dropping at level 70 for the first time, and a potential big buff to pet damage. Read on for all the details!

Legendary Items Dropping Again
Certain Legendary items were removed when the Reaper of Souls Expansion arrived, and so were not dropping. One of those items was the Hexing Pants of Mr. Yan. As seen in the image above, from a discussion at reddit, those Legendary pants are now dropping at level 70. This was listed in a blue post in the Italian Blizzard forums, and then later confirmed in the updated Patch 2.0.4 Hotfixes. There are 6 items that have now started dropping at level 70, that weren't available in the expansion before patch 2.0.4.
Post by Blizzard (Italian Forum)
Shortly before the launch of Reaper of Souls some legendary items were temporarily removed because they needed a fix that was implemented with patch 2.0.4. As the patch is live, the following items can be found again in the game:

Pets Fully Inherit Critical Hit Damage
Another substantial change that slipped into patch 2.0.4 involves pet damage. Previously the Critical Hit Damage stat for pets was capped at 50%. With the patch that cap has been removed, so pet critical damage now can scale up further based on their master's gear. This was confirmed as an intended change by Nevalistis, for all pets. This change dramatically increases the damage of pets for characters who have a high amount of Critical Hit Damage.
Post by Blizzard (Blue Tracker, Official Forum)
Posted by: Bogy04/09/2014 05:08 PM

This is indeed an intended change, and the amount of benefit provided to pets does not have a cap. Critical Hit Damage now scales for all pets, from Witch Doctors to Demon Hunters. This actually also includes stationary pets, such as Sentries and Hydras.

Apologies for the delay in communication on this one, but we always want to be sure the information we're providing is full and accurate, and it took me some time to check with all the appropriate folks that this was an actual change and not a bug. We'll be updating the patch notes to reflect this information as well.

Skill, Item, and Gameplay Undocumented Changes
Here are further changes to the game, as detailed in various reddit.com/r/Diablo threads.


Cosmetic Undocumented Changes
There were many cosmetic improvements made with patch 2.0.4, and here are some of those. There will doubtless be more changes and additions that show up for the patch. Keep an eye on the Diablo III Patch 2.0.4 Patch Notes and Hotfixes for updates to the official patch notes and hotfixes.
Recent News
Diablo III: Ultimate Evil Edition
The console Diablo III edition includes all of the Reaper of Souls content, and special social features!
PlayStation 3