More hints that ladder seasons are coming to Diablo III 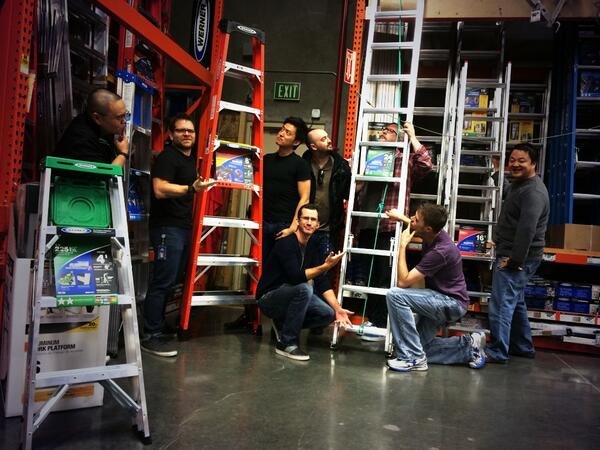 Diablo III Game Director Josh Mosqueira is teasing the Diablo III community again, with Tweets about adding a ladder system to the game. We may hear some details about that within this next week, shortly before the release of the Reaper of Souls Expansion. Here is a look at the latest tidbits, and what the developers have said about ladder seasons in the past.


The latest tweet from Mosqueira includes the picture shown above, with the Diablo III systems designers huddled around actual ladders in a warehouse, pondering them deeply.

There was an earlier tweet that he replied to, where he also turned the conversation toward thoughts of ladders. The legendary shield Wall of Man was brought up, that has a description which clearly refers to Mosqueira's name: Named for the Battle of Josqueira, a conflict so long and fierce that men used the skeletons of their fallen comrades to build fortifications.


@redditdiablo @Diablo We only speak of it in hushed tones... we didn't just build walls out of bones, but also ladders to climb over them...

Another recent tweet, by Community Manager Nevalistis, also hints at a big preview blog from Blizzard that will be arriving soon:

If you enjoyed my 2.0.1 preview blog, you're really going to enjoy what I'm working on now. #muahaha #D3RoS #Soon

This is likely related to the hints dropped in earlier Tweets from Josh Mosqueira, about new features that have progressed far enough that the UI and Online designers are be working on them, along with the system designers.

So what is a ladder system, and what might it be like in Diablo III? The easy place to look for inspiration is Diablo II. That earlier game in the Diablo series has had ongoing ladder seasons, where players can choose to make new characters in an entirely separate economy, and level them from start all the way up. There is a short race at the start of a new Diablo II season, to see who can get up to the highest level as quickly as possible. There are specific bonuses in the Diablo II ladder seasons, with drops that can only be obtained by playing a "ladder character".

The Diablo III developers have mentioned the idea of ladders many times, and how they would like to add something that fits within the design of Diablo III. In July 2013 the Diablo III development team asked for thoughts from the community on the basic idea. Further back in May 2013, Wyatt Cheng talked about the idea of ladders, and how they might fit within the Diablo III design. Ladder seasons were also mentioned in September, in relation to the Paragon 2.0 system that was added in Patch 2.0. Since there is not much of an economy left in Diablo III, with the Auction House being removed and Legendary and Set items bound to account, that aspect of a ladder system would presumably not be a big aspect of the feature, if it is added to Diablo III.

So the Diablo III developers have been pondering the idea of putting a ladder system into the game, for quite some time. It appears that they have now settled on a specific design, and we may be hearing details about that very soon.
Recent News
Diablo III: Ultimate Evil Edition
The console Diablo III edition includes all of the Reaper of Souls content, and special social features!
PlayStation 3