With the release of the upcoming 'Reaper of Souls' expansion barely 4 weeks away, more details are coming out about the pre-order bonuses. Any pre-order copies will get two cool extras: the Wings of Valor cosmetic bonus for Diablo III, and an unlock in Blizzard's upcoming Heroes of the Storm hero brawler game! Here are the official details.

Behold! Two epic new bonus items have just been spotted in the mortal realms, both of which will be granted in the future to anyone who pre-purchases the Reaper of Soulsâ„¢ expansion digitally on Battle.net, or anyone who redeems a Reaper of Souls retail game key on or before March 31, 2014.

Check them out below: 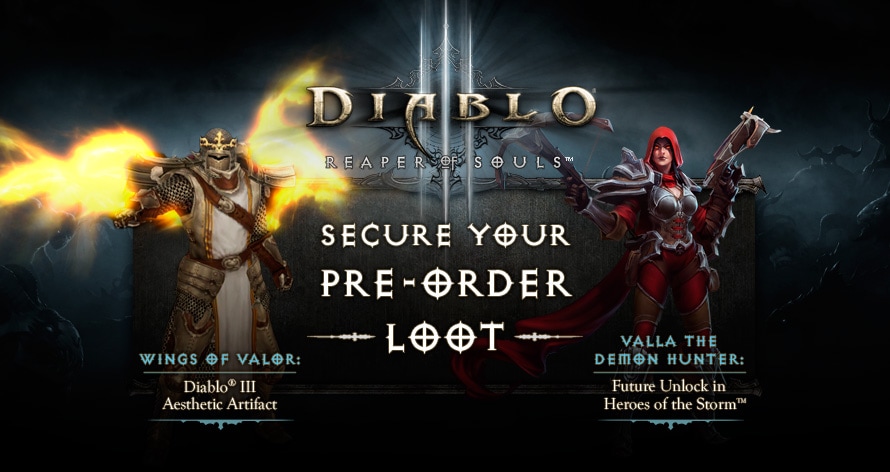 Wings of Valor: Summon the radiant wings of the Archangel of Valor for your characters in Diablo III.

If you've already digitally pre-purchased the Reaper of Souls expansion, either as the standard edition or the Digital Deluxe Edition, then you're all set! These bonus items will be granted to your Battle.net account as follows:

If you pre-order Reaper of Souls at a retail storeâ€”either a physical standard edition or physical Collector's Editionâ€”be sure to redeem your Reaper of Souls game key via your Battle.net account on or before 11:59 PM PST on March 31, 2014. If you redeem your game key after that date, your pre-order loot will be consumed by the fires of the Burning Hells and lost forever. While you have six days from the time the expansion launches on March 25 to the time you must enter your code, to be safe, you should secure your preorder today and be ready to input your game key on launch day.

For more information on the upcoming March 25 launch of Reaper of Souls, be sure to check out the official expansion website, and keep your demon-weary eyes glued to www.diablo3.com for the latest news on the game.

Until then, slay well, Nephalem.